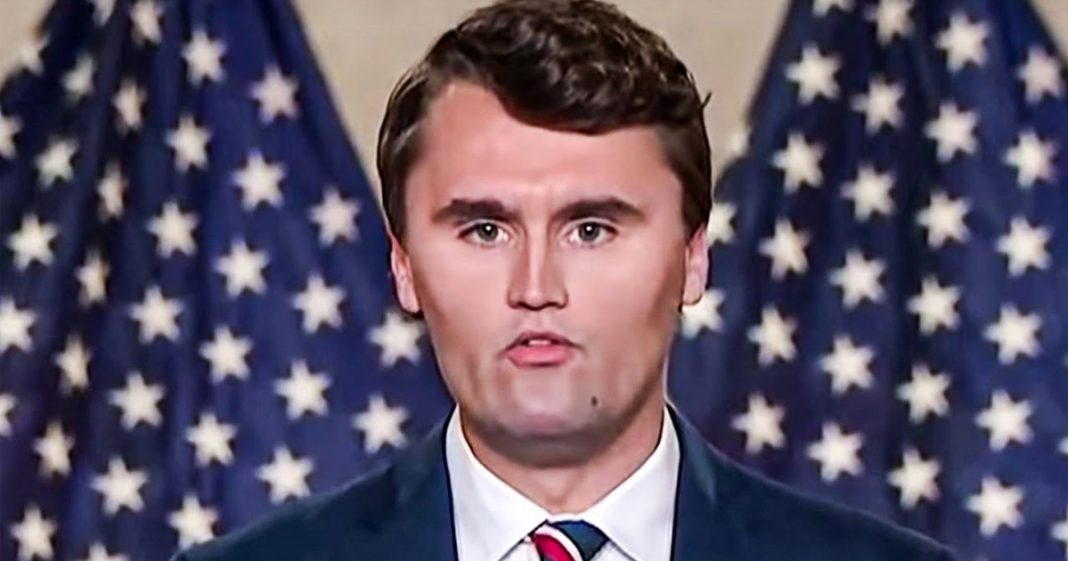 Charlie Kirk, the Trump sycophant in charge of Turning Point USA, found his organization exposed to the public this week when it was revealed that they had been using teenagers, some of whom were minors, to spread fake news online. The pro-Trump group has been revealed as a fraud, with their “grassroots” facade falling off to reveal an army of paid trolls. Ring of Fire’s Farron Cousins explains what’s happening.

It was revealed this week that Charlie Kirk, the, a kid who runs turning point action and turning point USA is essentially running an organization. That is nothing but a complete fraud. Now I don’t mean they’re actually defrauding people. What I mean is that what they claim to be doing is not actually what they’re doing. See, it was revealed by the Washington post this week, that turning point action has actually been paying teenagers. Some of whom are minors can’t even vote yet, but they’re paying these kids to go out there and post on social media. These pro-Trump messages. And it’s not always necessarily about Donald Trump. Sometimes it’s just go out there and send a tweet or two talking about how the Corona virus, death numbers are inflated, send out a tweet that says you can’t trust. Dr. Fowchee send out a tweet that says Democrats are creating civil unrest in cities across the country.

So while they may not all be specifically pro Trump, they’re all sending that Trump message that they want us to believe. But here’s the thing. Turning point action, turning point USA. The group from the very beginning has been nothing but a, a fraud, a front a means to spread a certain message. And that is exactly what they’re doing here. They just didn’t think they would get caught with it. I guess they saw the tactics that we saw coming from overseas in 2016. You know, those troll farms they were running and they thought, you know what? It helped us last time. Why don’t we do it here in the United States instead of having to outsource it, right? Create some good American jobs out of it, I guess. But the truth is these teenagers, these kids were duped. It’s free, easy money, right? Oh, go send a tweet. Sure. Why not? I don’t even know what I’m talking about. I don’t even know what I’m saying,

But they did it. And they got paid. And according to the Washington post investigation, they found thousands and thousands of identical tweets, identical Facebook posts, identical Instagram posts over the summer alone from these teenagers who were getting paid from turning point action. So what does this mean from here on out? Well, first and foremost, obviously, Charlie Kirk was not available for comment. You know, a little too busy to address this massive report about how his group is nothing but a troll farm for kids. But they did have one guy, Austin Smith. He’s the field director for turning point action. He says, this is sincere political activism conducted by real people who passionately hold the beliefs. They describe online, not an anonymous troll farm in Russia.

Here’s the thing though. They really don’t hold these beliefs, but the reason you framed it that way, and there is a reason he framed it that way he chose his words carefully is because your group has to give the appearance of being genuine. Like you’re actually tapping into some, uh, you know, feeling among the youth in America. That conservatism is the way to go, Oh, less government involved in my affairs. Old don’t let anybody ever have the right to choose what to do with their own body. That’s what teenagers love, right? No, the whole thing’s been fake from the start and now you’ve been busted. Now it’s been revealed now everything that you say or do should be met with scrutiny, it’s also worth pointing out by the way, the Charlie Kirk was the very first person to speak at the Republican national convention.

So don’t think that this little scandal here is going to make turning points USA go away. Now, if anything, it’s going to draw other conservatives to follow suit and possibly even democratic organizations as well. If they haven’t already, Here’s a tip. Maybe don’t get your political beliefs from some random person posting on Twitter. Maybe do a little research, maybe follow the links, maybe read some stories on your own and formulate your own opinions. If we do that, then we could put groups like turning point USA out to pasture for good.