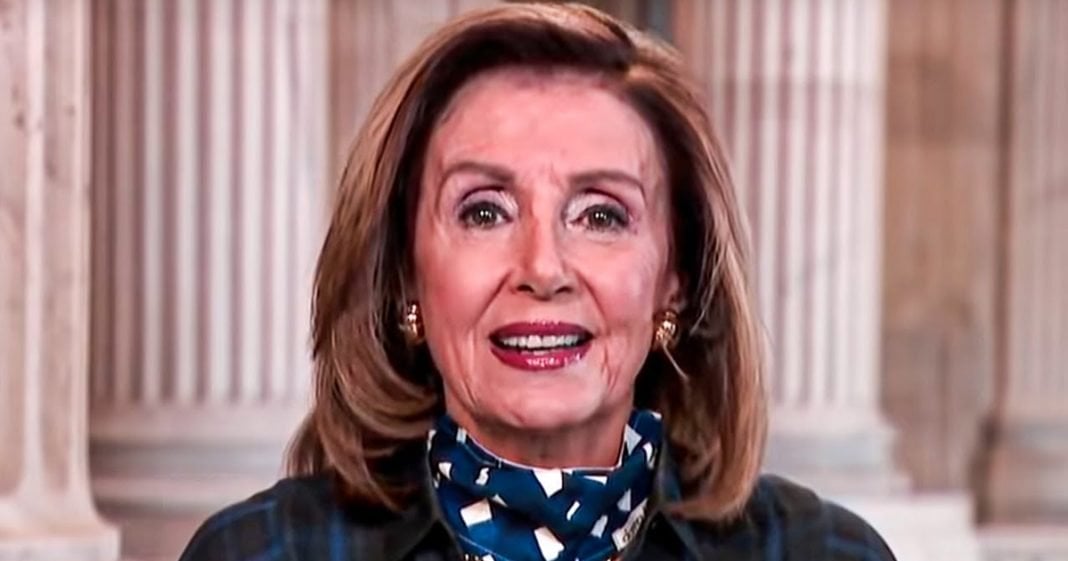 House Speaker Nancy Pelosi might not have an actual say as to who gets to replace Ruth Bader Ginsburg, but she does have tools at her disposal that could help save the seat until after the election. This includes leveraging a looming government shutdown, but she has already made it clear that she refuses to do it. She says she “might” be open to impeaching Trump in order to stop them, but that’s never going to happen. Ring of Fire’s Farron Cousins explains what’s happening.

So, uh, in the wake of the passing of Supreme court justice, Ruth Bader Ginsburg, as I’ve mentioned, Democrats don’t have a whole hell of a lot of options here. Um, they don’t have the majority in the Senate, so therefore Mitch McConnell can kind of do whatever he wants and he can get Trump’s nominee appointed. Now, Nancy Pelosi over in the house of representatives has even less power than the powerless Democrats in the Senate, or does she, she may not have a say and whether or not whoever Trump appoints actually gets confirmed. Cause she is not in the Senate. Therefore doesn’t get to vote on it. She does have some tools at her disposal, but don’t worry folks. Cause she assured us over the weekend that she is absolutely not going to use those tools. Why? Oh, cause that’s just what she does. She approaches every situation from a position of caving.

Cause that’s just what the democratic party does. They approach everything. Every time they have to go and compromise, they already pray compromise before they get to the part where they actually have to compromise thereby giving away far more than they ever possibly needed. What happened this weekend is that Nancy Pelosi said she would absolutely not use the threat of a government shutdown because for those who haven’t been paying attention about two weeks ago, they reached a tentative deal. Her with Steve Minutian, uh, to avoid a government shutdown in the short run. But in the long run, we still have a budget battle. There seems to be no resolution in sight. Therefore we would be seeing a government shutdown. She can absolutely back out of the negotiation she made with Minutian and shut down the federal government. At the end of September, she could do that.

And she could say, we’re not going to come up with any kind of temporary spending. We’re not going to come up with any kind of longterm budget until, and unless you make sure that you do not under any circumstances, nominate a judge to replace Ginsburg until you know, well, if you win the election, sure you get to go ahead and do it. But if you lose, we don’t do it at all. Now would Trump adhere to this? Probably not. But could Nancy actually be seen as a strong positive leader if she came out and did this? Absolutely. But she won’t. This is the one tool. This is the one tool in her arsenal that she could use. And I feel like before anybody even suggested it, she came out and said, no, no, no, no, no, no, no. I’m not doing this. Don’t worry. I’m not, absolutely not going to do this. And then she said something even worse. She said, she’s open to the idea of re impeaching Trump because then the Senate, once they have articles of impeachment that have been passed by the house of representatives, they’re not allowed to take up any other business until after those articles have been voted on by the Senate.

Pretty interesting trick there. Right? It’s a catch with that. You actually have to have a reason to impeach him. Like you have to have evidence of high crimes and misdemeanors otherwise now, I mean, technically sure you could draft an article of impeachment right now and saying, we don’t like Trump. We want to impeach. And you have the majority in the house. You could absolutely impeach him for that. How’s that going to look though? When people go to the polls in November, they’re probably going to hurt the house, probably gonna hurt our chances of retaking the Senate. And it’s definitely going to hurt Joe Biden’s chance of becoming president of the United States. But she said, she’s open to that. You know, I’m open to doing the stupid thing instead of the actual helpful thing. That’s, that’s where she’s at right now. And the reason she said that by the way is because she knows she’s not going to have articles of impeachment. She knows she’s not going to impeach the president. They’re not even willing to impeach attorney general William Barr. Who’s legitimately committed crimes. So yeah, she’s not going to impeach Trump to tie the hands of the Senate. She’s not going to use the budget as leverage. She’s not going to do anything. So the only thing that she should do is be voted out of office in November. That’s it?

Every member of democratic leadership at this moment appears to be nothing less than worthless. That’s a broad statement to make about all of them, isn’t it. But I firmly believe it. At this point, they all got to go. They all have to be replaced. They all have to be primaried. We have to get rid of these people. They’re useless. They are worthless. Their policies might not be as bad as Republicans, but they don’t ever actually pass their policies time for them to go. And it’s time for us to bid them a fond farewell, throw them a great lavish party. I’m sure Marcos mullet sauce from daily coasts would be more than willing to send lots of roses to Nancy Pelosi on her way out. But that should be the end of it. She’s not fighting for us. So who the hell is she fighting for?