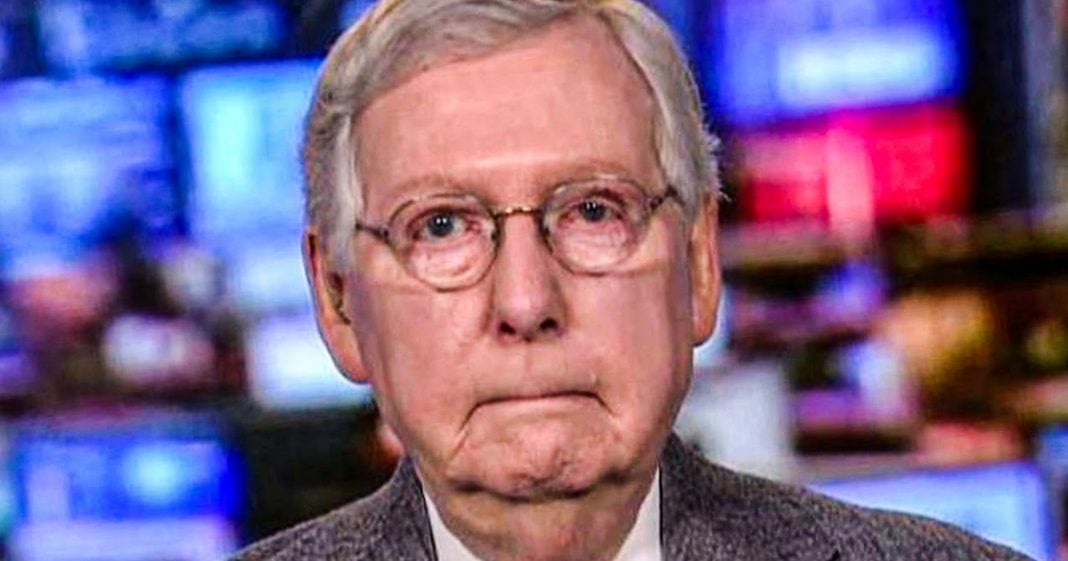 Donald Trump says he wants a COVID relief bill. Nancy Pelosi wants a deal. Mitch McConnell doesn’t give a damn one way or the other. The man is living up to his self-proclaimed title of being the Grim Reaper by killing any attempts at legislating, but he hasn’t stopped ramming through disgusting judicial picks who will keep destroying this country long after he is gone. Ring of Fire’s Farron Cousins discusses this.

President Donald Trump says that he wants a, another COVID relief package. Speaker of the house. Nancy Pelosi says that she wants another COVID relief package. The two have actually been having fairly cordial talks this week, from what we’ve read, there’s just one person that’s really just always kind of standing in the way. And that one singular individual is Republican Senate, majority leader, Mitch McConnell, Mitch McConnell does not want to make a deal. In fact, that’s why he came up with the so called skinny package a week or so ago that was designed to fail. And of course, all the headlines did it. You know, Democrats vote down skinny package, a Democrat Democrat, nah, the whole thing was designed to fail. It had nothing in it for the American people. It actually had bailouts for the fricking coal industry. That’s what McConnell did he disguised it as a COVID relief bill that did absolutely nothing.

It had no money for States to, uh, keep testing people for the virus. And here we are and he is currently blocking, uh, the heroes act. The George Floyd police, uh, justice and policing act. He’s walking election funding. He’s bought blocking dozens of civil rights bills. He is blocking any action. As I mentioned on COVID relief bill. So what the hell is Mitch McConnell doing? He’s showing up to work everyday. What is he doing? He’s confirming Trump appointed judges just this week. In the span of two days, we had six more Trump appointed judges approved by Mitch McConnell Senate off to go serve the rest of their lives if they so want on a federal judicial bench. Because that folks is the only thing Mitch McConnell cares about at all. That is Mitch McConnell’s legacy. It’s not Trump’s legacy. He’s going to want to say it is, this is all Mitch McConnell. This is 100% Mitch McConnell. He has made it clear. This is what he wants to do. He is the one according to reports, helping pick these judges along with, according to the reports. Again, the Federalist society, Federalist society, uh, denies this,

God, the party is stupid. Mitch. McConnell’s beatable. Yeah. People in Kentucky like him, but not enough. And if you put a even somewhat competent person running up against him to talk about how horrible he’s actually been, not just for the country, but also for Kentucky specifically. Yeah, not that bad, but not putting up a pro Trump Democrat that says I’m going to do the same thing he did. I’m just a member of a different party. Nope. That doesn’t work. That’s a really stupid idea, but party endorsed it. So any McGrath will lose. I’d love it if she wouldn’t buy by the way. But she’s gonna answer when we left another six years of elderly turtle, man, Mitch McConnell, calling the shots, blocking meaningful action, blocking any help for American citizens and doing everything possible, including packing the courts as much as he can to make sure his corporate pals get everything they’ve ever wanted. And I’ll tell ya, thanks to Mitch already. Those corporations are pretty damn close to already having everything they could ever want.