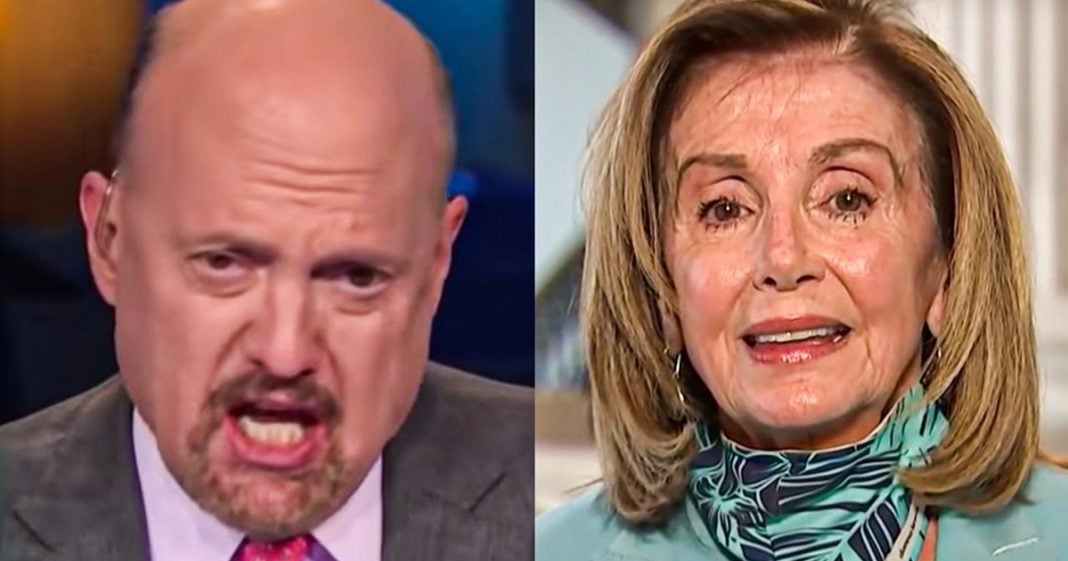 CNBC host Jim Cramer found himself in hot water this week after he referred to House Speaker Nancy Pelosi as “Crazy Nancy” to her face during an interview. The host was immediately met with calls that he should be fired, but it doesn’t appear that CNBC is going to take any action against their already-disgraced host. Ring of Fire’s Farron Cousins discusses this.

CNBC host Jim Cramer had a moment where he absolutely panicked on the air. I mean, fear in his eyes. You could tell that man knew that he just made a grave mistake. And the mistake was calling house speaker, Nancy Pelosi, crazy Nancy to her face during an interview. Here’s the clip.

Jim Cramer: I mean, what deal can we have, Crazy Nancy. I’m sorry. That was the president. I have such reverence for the office. I would never use that term. But it is hard, isnt it?

Nancy Pelosi: But you just did.

Nancy Pelosi: But you just did.

Nancy Pelosi: I know what you meant. I do, I do.

Jim Cramer: The reverence I have for the office is so great.

Now, if you’re like me, you probably watched that clip and had the exact same thought. And that thought was, I thought Jim Kramer got fired after John Stewart publicly humiliated him and destroyed his reputation. No shit. I didn’t know. Jim Cramer was still on TV. I sincerely thought that when a mad money had been like canceled back in the day, I thought that was the end of his career. And that was 15 years ago, maybe 14, 13, whatever. It was like, didn’t know, the guy was still on the air. He had been exposed as like this fraudulent, you know, hyped up money, man, that didn’t know what he was talking about. That screwed around with people’s lives. Again, if you haven’t seen John Stewart publicly own Jim Kramer, please go watch it right now. It is worth your time. It’s one of the best clips that television has ever generated for us.

But apparently Jim crammer is still out there. And Jim Cramer is still hosting mad money. Again, a show that thought was gone because it costs a lot of people, a lot of money because Jim Cramer doesn’t know what he’s talking about. And he turned finance into a game. The man has no reputation. The man has no skillset. Why in the hell would he even be allowed to interview the speaker of the house of representatives? Why would she even dignify him with her presence? I am not the biggest fan as I’m sure everybody who’s ever seen ring a fire knows I am not a big fan of Nancy Pelosi at all. Is she crazy? Nope. That’s one thing I’m certain of she is not crazy. She’s not progressive enough. She’s not left enough, but she is not crazy. And she is not lazy. Jim Cramer’s words.

There were absolutely uncalled for, and he can be like, Oh no, no. I mean, obviously I don’t pretend to be the president. Nah, it doesn’t matter. That also just goes to show just how far down Donald Trump has sunken the dialogue here in the United States. CNBC needs to take action. CNBC is not going to take action. They’re not going to do a damn thing to Jim Kramer because apparently even after having his reputation destroyed, if that’s not enough to get you kicked off CNBC, then apparently nothing is honestly not only the fact that Jim Cramer has a job is what is shocking. The fact that CNBC is even still on the air is actually rather shocking as well. I mean, clearly this is a network that has no standards, no integrity. And more importantly, no viewers. So how are they even in existence, I can tell you what they keep treating elected officials like this. It’s one thing to go hard on people during an interview, ask them tough questions, put them on the spot, make them a little uneasy. Sure. Do that all day. But you resort to name calling and you’re no better than the trolls that we have to deal with every day on Twitter.