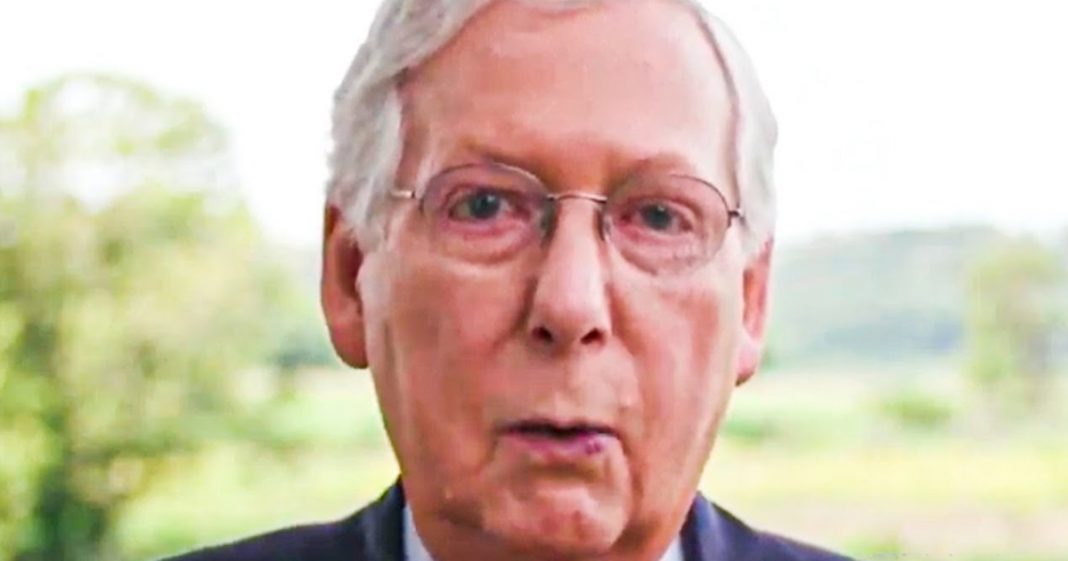 With the passing of Supreme Court Justice Ruth Bader Ginsburg, many online Democrats have been posting clips and quote from Mitch McConnell about not filling a Supreme Court vacancy during an election year. This serves no purpose whatsoever. You cannot shame a Republican into doing the right thing, and all of this finger-wagging is wasted time that could be put to better uses right now. Ring of Fire’s Farron Cousins discusses this.

The sudden passing of Supreme court justice, Ruth Bader Ginsburg, uh, to essentially kick off this weekend left a lot of people, myself included, um, in a bit of shock that event has absolutely, uh, in so many different ways has changed the 20, 20 election with only about what 40 days to go with this point everything’s changed. Now, the stakes have now changed, but one thing that hasn’t changed and it, it almost annoyed me all weekend, watching people shocked about this. One thing that hasn’t changed is Republican hypocrisy. There were legitimately people out there still are, who are shocked, shocked that Mitch McConnell would be a hypocrite because he wouldn’t allow Obama to feel it fill a Senate seat or a Supreme court seat, excuse me, in 2016, because it was an election year. He said that people should decide in the election, but now, uh, just hours after Ginsburg’s death, he said, no, well, we’re going to bring somebody to the floor who will bring up a vote.

We’re going to fill the seat. Um, because yeah, we can and people, Oh no, no. Mitch, you said we can’t do that whole, Whoa, what are you going to do? Oh, wait, Whoa. Here’s a clip of you saying that. Now what owned? No. No. Why they, why? Why would you even think that Mitch McConnell has shame? Why would you think that Mitch McConnell has a conscious what in his history has led you to believe in any way that Mitch McConnell can be shamed into doing something? This is the man who literally last week said to hell with it. We’re not going to bail people out. Who’ve lost jobs. 30 million Americans still without jobs from the pandemic. Mitch McConnell says, Oh well. And you think you can shame him. When his only desire on the planet is to pack every single court imaginable. You think you can shame him into not filling justice.

Ginsburg’s vacancy. Good luck with that. It’s a waste of time. It’s a waste of effort that that could be put towards so many other things. But shaming, Mitch McConnell is stupid in pointless. Being shocked that Mitch McConnell would do. This shows that you haven’t been paying attention at all, that you only have a superficial understanding of American politics. That’s what it told me. All of the people I saw out there who acted shocked by this, you lost all credibility in my eyes, hundred percent, everyone who’s been paying deep attention. Who knows things who actually reads things. We knew that this is what Mitch McConnell would do, because this is what Mitch McConnell does. Republicans are hypocrites folks to a degree. Democrats are too, by the way.

But, but this is the reality that we have. We, we have a Supreme court vacancy. Uh, Trump announced this morning, he’s going to name somebody. Uh, either Friday or Saturday of this week, we will have the name. We will have the person. And I guarantee you next week, we’re going to start with the hearings. And possibly even the voting that’s what’s going to happen because that’s what Republicans want to happen. Because unfortunately the way this idiotic system that we have is designed, they can do that. That’s the worst part of it. They can do this. They can do it. There’s very little. If anything that we, the average American citizen can actually do to stop it. And I know there’s people have been protesting outside of Mitch McConnell’s house. There’s people who have been protesting outside of Lindsey Graham’s house. Yeah. Because you can totally shame him into doing something. No. How about you spend that effort? How about you start making phone calls to the people whose minds you can change Mitt Romney, Rakowski Collins. Cause all of them had said, no, I think we, I think the next president should get to do it. I think the next president should get to do it. They’ll vote for it. They’ll absolutely a hundred percent vote for it.

Call them, you can persuade them. You can pressure them. You’re not going to change Mitch. McConnell’s mind. You’re not going to change Lindsey. Graham’s mind. There’s a couple minds out there that are changeable, but I gotta tell you what I’ve seen so far this past weekend, both the kind of responses from online people, both responses from people in the media and responses from the democratic party itself. I don’t think any of them are actually taking any of this. Seriously. I truly don’t. Now there’s plenty of people who are, by the way, you know, the, the, the activists they are, they get it. The D non-corporate media types. They understand it. The rest of them. No, they it’s all, it’s all performance art. It’s all performance art, Nancy Pelosi. Her response to this weekend was a Bismal. So that’s where we are. The seat is open. The seat is vacant and Republicans barring any unforeseen miracle are going to fill it.