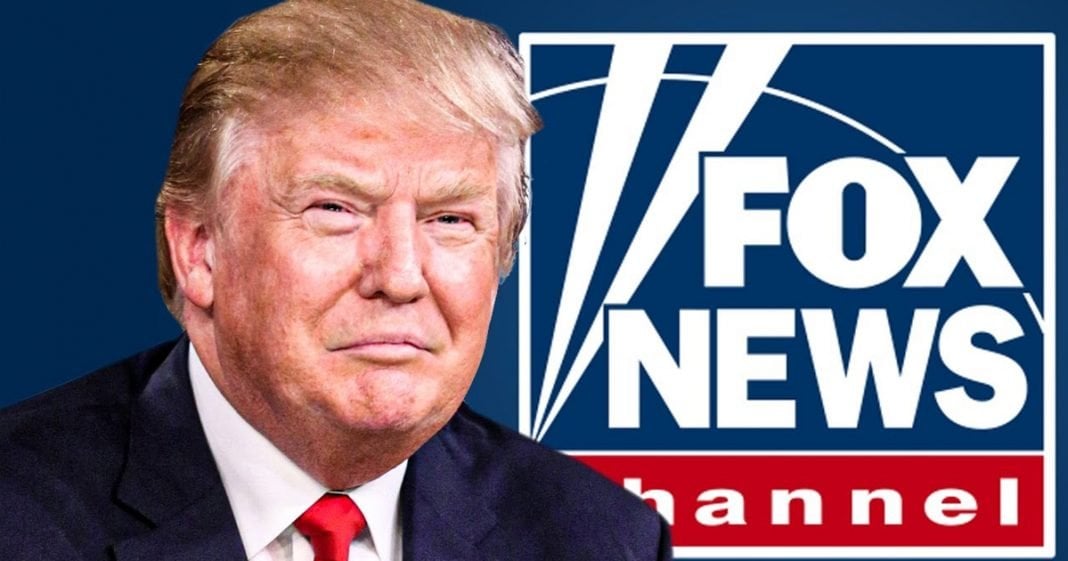 According to a new poll from Fox News, Donald Trump is far less competent than Joe Biden, and voters believe that Trump is less “mentally there” than his Democratic rival. Not only is this poll likely to send the President into an unhinged tirade against Fox, but it also confirms that the talking points this campaign is putting out against Joe Biden are not working AT ALL. Ring of Fire’s Farron Cousins discusses this.

Well, Donald Trump is going to have a new thing to be unhinged about on social media as Hey, new Fox poll released this past weekend shows that the majority of respondents in this new poll actually think Joe Biden is more mentally competent to be president than Donald Trump is. In fact, Joe Biden has a majority of people in this new poll who say he is competent enough while Donald Trump does not. Now Biden supporters don’t get big heads about this because Joe Biden only has 51% of respondents saying that he is mentally competent and Trump has 47%. Uh, but again, this is a Fox news poll and Donald Trump tends to freak out every time there was a Fox news poll that does not break in his favor. So especially on an issue like this, I am shocked. We have not seen a bigger reaction from the president, but I’m willing to bet as is often the case when we don’t see the reaction in public that we’re going to in a week or so read that there was a horrid reaction behind the scenes from a staffer who leaks the story to the press.

That is what happens. Usually if we do not see the president having a public meltdown, he’s still having the meltdown. It’s just only in front of the aides and he’s trying his best to, I guess, hold back the tears poor guy. But what this poll shows is the same thing that a poll released last week shows. And that is that as much as Donald Trump wants the public to think that Joe Biden is not mentally fit, they still think Trump is less mentally fit than Biden, which means the talking point that his campaign has been pushing for quite a while. Now, the talking point, Trump keeps mentioning when he talks about Joe Biden in his rallies, or when he mentioned Joe Biden and interviews like the one with Janine, Pirro where he said, these guys must be drugged. He’s drunk, he’s drugged public. Doesn’t agree with you.

They’re not buying into it. And that’s a problem because that’s literally the only message you’ve running on right now, other than of course law and order, which also isn’t resonating with the public. So what else you got anything else in your bag of tricks? I mean, hell we’re, you know, month and a half away from the election, you probably need to come up with a better strategy, but you can’t cause your arrogance. Won’t let you admit that you made a mistake and you’re stuck with what you’ve got. Now, here’s the kicker though. This, this is actually the scary thing. These numbers could very easily change for Biden and Trump. Um, Trump in a positive way by and in a negative way with the debates. I’ve always said that those debates are going to be key. Joe Biden is not going to have other Democrats up there to interject or to try to, you know, save him or, or whatever it is, you know, or take the spotlight off him in the democratic debates. You know, Joe Biden would get few minutes of talk time because there were so many candidates up there. We doesn’t have that benefit. Now he’s going to get half of the time, roughly.

That’s not good. No, I’m sorry to say that. I hate to be the naysayer for all the hardcore Biden folks, but you know, as well as I do the guy, can’t go out there and talk for very long. It doesn’t end well for him. He eventually does say something stupid. Trump always says stupid stuff. So we don’t have to worry about that. He’s going to say stupid stuff, but the first time Biden says anything. The first time Biden slips, first time he stutters first time he mispronounces a name or forgets a place. Trump’s get a pounce. It’s going to be bad. It’s going to be real bad, but nowhere is it going to be worse than with Biden’s poll numbers. So we should enjoy these numbers while we got them. Cause there’s a very good chance. They’re going to flip after that first debate.