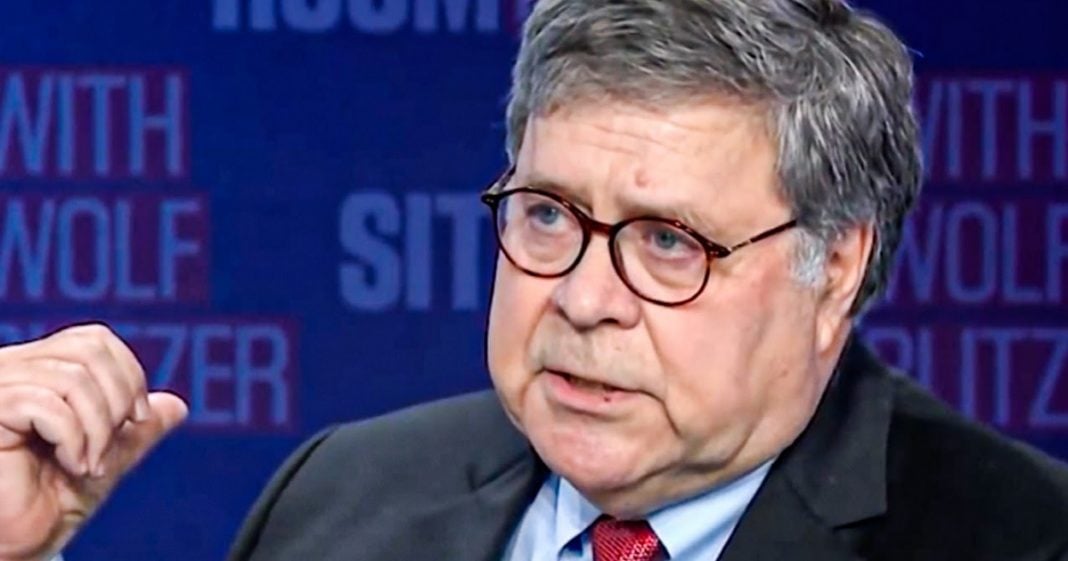 According to Attorney General Bill Barr, charging protestors with sedition is within the realm of possibility. This means that protestors could face charges of attempting to overthrow the government of the United States, which would obviously result in a much harsher prison sentence than a simple vandalism charge. Ring of Fire’s Farron Cousins explains what’s happening.

Last week attorney general William Barr, um, actually had a conference call with, um, us attorneys from across the country. And what he did was he explained to these us attorneys, what kind of tools they had at their disposal to deal with rioters and protesters in their areas. And one of the things he told them they could do was charged these people with sedition. Now, for those of you who are not familiar with sedition, let me go ahead and boil it down to its most basic tenant. Sedition is essentially the charge that William Barr wants them to use it for conspiracy to overthrow the United States government. Now, let me ask you, even in some of the most violent or some of the most bizarre footage we have seen from some of these protests that turned violent over the last few months, have you seen anybody actually trying to legitimately attempt to overthrow the United States government?

Have you seen anything resembling that at all? Because I haven’t and I’ve, I’ve watched a lot of the footage. I mean, admittedly, I haven’t been on the ground there, but I’m willing to say that these people were not by breaking windows in a shop legitimately trying to overthrow the government because if they were, then they’ve gotta be the dumbest people in the world because that’s not how you overthrow a government, you know, smashing a couple of windows at a big box store. Doesn’t exactly hurt the federal government itself. Right? So I’m, I’m not sure how that works, but, but trust me, bill BARR, obviously a much better legal mind than I am. He knows exactly how that amounts to conspiracy, to overthrow the United States government. Here’s the actual, uh, seditious conspiracy statute that William Barr wants them to use 18 us code section 23, 84. Here it is.

If two or more persons in any state or territory or in any place subject to the jurisdiction of the United States can aspire to overthrow put down or to destroy by force the government of the United States or to levy war against them or to oppose by force the authority thereof or by force to prevent hinder or delay the execution of any law of the United States or by force to seize take or possess any property of the United States, contrary to the authority thereof. They shall each be fined under this title or imprisoned, not more than 20 years or both. Now I know some people are going to say, Oh, I see some of the other person. No you don’t. You really don’t. You really don’t nothing that I just read out of the statute other than, you know, to oppose by force the authority thereof. However, okay. That could be the only one you could construe the rest of them. No total BS. It’s going to get thrown out. However that one also can be thrown out because you could easily make the argument that the force that is being used against these rioters is actually excessive.

The actions of the government itself would amount to a violation of constitutional rights. Therefore, any halfway decent attorney is easily going to be able to argue on behalf of these people, that when your constitutional rights are violated, it is within that person’s capacity. It’s within their own psychology to do what they can to fight back against that oppressor. Because after all, is that not what this country was founded upon, fighting back against an oppressive government. And these people were being oppressed by their own government, a government that itself was violating that constitution. So how, how could you punish these people for doing what the constitution was actually founded to prevent? See, not that hard. I’m not even a lawyer. Lawyer would probably do that far more eloquently than I did, but nevertheless, that’s how you would make that argument. But the thing is William Barr and Donald Trump want people to be charged with sedition so that they can then go to the public and say, listen, they’ve actually been charged with conspiracy to overthrow the U S they were trying to overthrow the U S this is another fear. Tactic bar knows.

This is not a charge that is going to stick, but if they can get a couple of headlines out there, probably on Fox news and Breitbart and daily caller and all those other ones, if they get a couple of headlines out there that say, you know, riot are charged with attempt to overthrow the government, suddenly that rings a little differently than rioters break. A couple more windows, The, the simpletons out there on the right are going to buy into that headline of, you know, conspiracy to overthrow the government. Even if the charge doesn’t stick, they’re not going to follow the case long enough to find out if it did or did not. They’re going to see that headline. And that’s all they’re going to remember it. If that happens, then sadly bill Barr’s tactic will have worked.