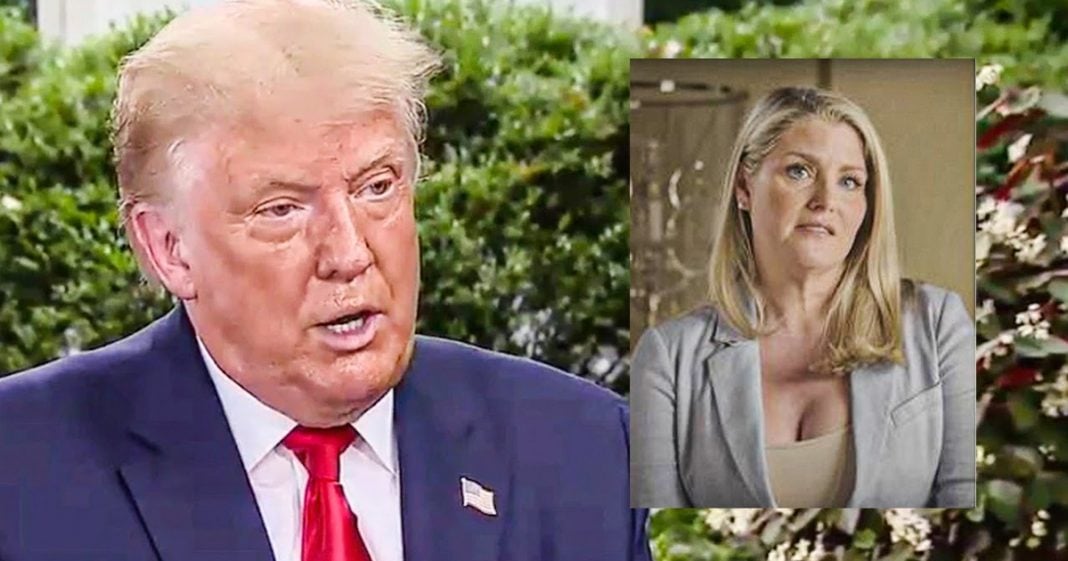 A former model by the name of Amy Dorris has come forward with allegations that Donald Trump sexually assaulted her back in 1997. This becomes the latest in a long line of claims made against the president for which he has never fully been held to account. We cannot continue to allow the media to pretend that this isn’t happening and give Trump a free pass. Ring of Fire’s Farron Cousins discusses this.

This week Donald Trump was accused by yet another woman of sexual assault. Uh, this time a former model by the name of Amy Doris, who claims that on September 5th, 1997, uh, actually at the U S open tennis tournament, Donald Trump accosted her. Um, and in her own words, this is what she says. Uh, he shoved his tongue down my throat and I was pushing him off. And that’s when his grip became tighter and his hands were very gropey in all over my butt, my breasts, my back, everything I was in his grip. And I couldn’t get out of it. I don’t know what you call that when you’re sticking your tongue just down someone’s throat, but I pushed it out with my teeth. I was pushing it, and I think I might’ve heard his tongue again, September 5th, 1997 is when this allegedly happened. Ms. Doris at the time was 24 years old.

She was there with her boyfriend, uh, was a series of events that had taken place over several days. She was actually around Donald Trump for several of those days as well. Her boyfriend at the time, good friends with him. And she couldn’t say anything. She didn’t say anything to her boyfriend. She did. However, tell this story to her mother and a close friend who were both able to corroborate the story to the guardian this week. So much like the reporter and Carol, she did tell people that this happened at the time. And those people when asked by the reporters gave the exact same account that this woman did kind of makes it a little less likely that she’s just making the whole thing up. So here we have it, another very credible person whose story has been corroborated by others who says that the president assaulted her in the 1990s.

She says, however, you know why she didn’t come out sooner? Uh, she said, obviously, you know, sometimes when things like this happened, you, you freeze. And not just in that moment, you freeze sometimes for decades, but she did say I’m sick of him getting away with this. I’m tired of being quiet. It’s kind of cathartic. I just want to get this out. And I want people to know that this is, this is the man. This is our president. This is the kind of thing he does. And it’s unacceptable. So the question I have, cause I know the, uh, you know, hardcore red hat, where’s there. They’re not going to believe this at all. Trump’s lawyers have already come out and said, no, none of this story is true. My question is for the average, middle American voter, you know, not necessarily left, not necessarily right, whatever you are, how do you square?

The fact that over the last five years, we have had more than 20 women by some accounts, actually over 40, depending on how broad of a term you use. But over 20, at least that have accused the president of either sexual misconduct or sexual harassment, more than 20. And at least one of them has straight up accused him of rape. How do you square that against your support for this man? Do you think all 20 plus of these women are totally making it up? You think every single one of them is just out to say, you know what? I feel like destroying Donald Trump’s career today. I’m just going to say rapey. Do you think that’s actually what happened? Do you think there’s anybody in this country that actually does these kinds of things that I know Republicans like to say that no, this is what the me too does. It makes everybody, uh, you know, uh, prone to get to these, uh, complaints against them. No, first of all, it doesn’t, it doesn’t happen. But when a woman comes forward, if it’s against Donald Trump or if it’s against Joe Biden, it needs to be taken seriously. And right now, what I see is absolutely disgusting. Cause I’m not seeing either party take it seriously.

I would like to see the terror read claims investigated further. I would like to hear more from her. I would like Joe Biden to give a very succinct answer about it. And I know he has addressed it a little bit in the past and his answer is okay, I want more, I need more. I need to know more of this story. But with Trump you get two dozen over here. I want to hear these stories and I want to hear the media start asking these questions. You know, don’t talk what he wants to talk about. Talk about this, bring up these women, bring up Amy Doris, bring up Jean Carol, bring up summer Zervos, bring up every single one of them. I don’t care what he’s talking about. I don’t care if he’s up there, prattling off lies about the coronavirus or sitting there giving us really insane views on American education. Doesn’t matter. Ask them about the rapes because I think that’s the thing. The public probably needs to know a little bit more about.