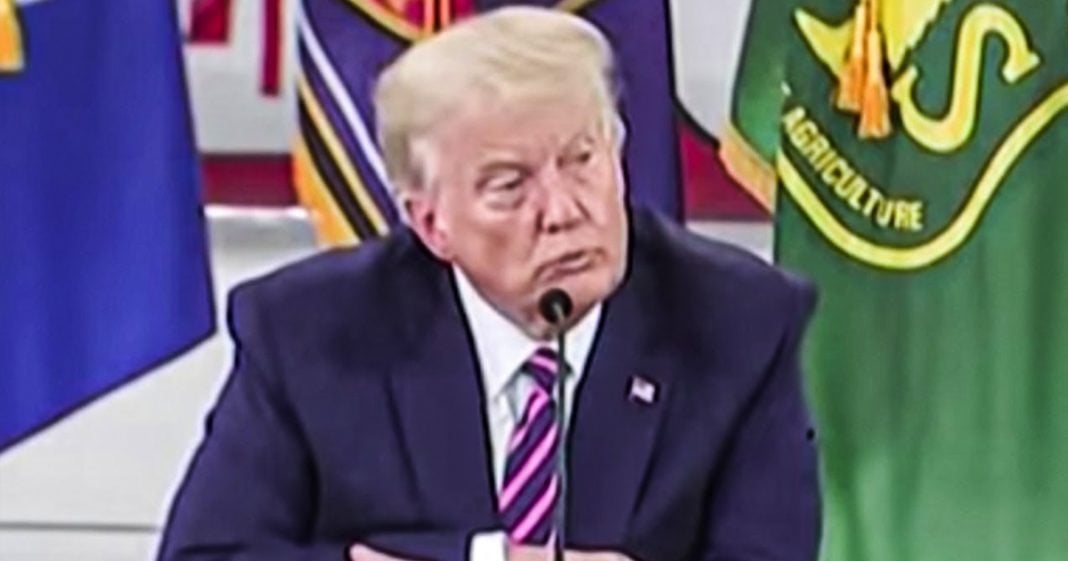 Donald Trump finally decided to travel to the west coast to see the devastation that has been caused by the dozens of wildfires ravaging the area. During a televised conference with California governor Gavin Newsom, Trump dismissed the role that climate change has played in the fires, and then said that things would cool down quickly, with regards to temperatures. This made absolutely no sense, and it proved to the world that the United States is being run by an idiot.

Yesterday, Donald Trump finally decided to travel out to the West coast of the United States and area of the country that he hates, uh, in order to act presidential for a few moments and, you know, kind of survey the damage being caused by the dozens of wildfires currently burning, uh, in California, Oregon, and Washington fires that by the way, since August have killed three dozen people, 36 people have died. 5 million acres of land have burned. And so Donald Trump finally decides to show up out there in California. And it didn’t take long for him to prove to the world that he is a complete idiot When asked by California governor Gavin Newsome to please not ignore the science. Not only did Donald Trump say that he doesn’t think science knows what’s actually happening right now, but he then said, it’ll start getting cooler. You just watch.

So, okay. Um, I think we’re down to 80 wildfires currently burning last week, right? 87. So seven a Mim put out we’re at about 80 wildfires burning. Uh, some of them bingo for over a month, the guy who’s, who’s kind of running the response right there in California, Gavin Newsom, governor of the state says, Hey, the evidence says that these fires are able to burn as much as they are because of climate change, because of all the droughts we’ve had that have gone on for decades. We’re not getting water. We’re not getting rain. We’re not getting the kinds of things that we need to help keep all the dry, uh, dead plants from burning. And Trump says, yeah, it’s going to cool down.

Not, not, not only does it not make sense as a scientific principle, but it doesn’t even make sense as a response to what they were talking about. Like, it’s one thing for Donald Trump. If he had just said, no, it’s not climate change. It’s doing this. It’s all the arsonist. Cause that’s actually the talking point of all the Republicans right now. It’s not climate change. It’s arsonists. Sure. There have actually been people arrested for arson. Uh, lots of them actually, but just because you go out and start a fire, just cause you light the match and throw it in the woods, doesn’t always mean it’s going to start a wildfire. You have to have the right conditions to do it. And the right conditions were caused by climate change. So even if Trump had come out there and said something like, no, no, no, no, no. It’s not. It’s not climate change. It’s arsonists. At least that would have been on topic. Right. But just straight up responding to say, it’s going to cool down soon.

What that’s that’s that’s not what anybody was talking about. What do you mean it’s going to cool down the state is literally on fire. It’s not going to cool down. Folks are dealing with the dumbest president we’ve seen in our lifetimes. And for me that’s a lifetime that includes Ronald Reagan and George W. Bush Trump’s dumber. Trump is dumb. He is a stupid individual. That, that, that that’s all I can conclude. And maybe, maybe it’s due to, I don’t know, severe Alzheimer’s kicking in. Maybe it’s due to dementia. That’s setting it. I don’t know. I would hope that it’s one of those things. Cause at least then it’s like, okay, that’s a reason. But if it’s not, because of one of those things, then it’s just straight up because the man is dumb as hell. California’s on fire, Oregon and Washington. Same thing. The friggin skies are orange out there folks right now, right now the air quality on the Western portion of the United States is the worst on the Planet. News came out yesterday. Air quality on the West coast is the worst of anywhere else in the world. And Trump’s not doing anything about it. He’s going out there making an ass of himself and that’s it. Cause I guess that’s all he knows how to do.