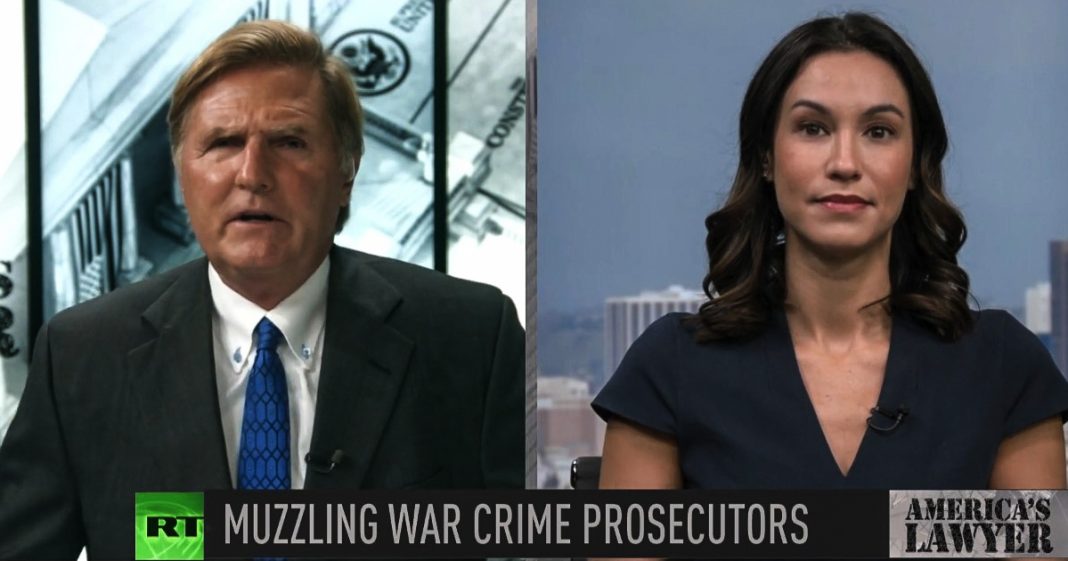 Mike Papantonio:             The Trump administration has formally announced sanctions against several members of the international criminal court for investigating alleged war crimes in Afghanistan. Brigida Santos joins me to talk about this. Brigida, it’s, it’s kind of a, it’s kind of a crazy stretch to say, look, somebody is investigating a war crime, and now we’re going to sanction that person for investigating war crimes. Which members of the court have been sanctioned and why is that happening? It just seems like a weird story. It seems like, it sounds to me like it’s something that actually is contrary to democracy. What’s your take?

Brigida Santos:                   Well, it is. Now the Trump administration has frozen the US based assets of the international criminal courts, chief prosecutor Fatou Bensouda and the head of jurisdiction, Phakiso Mochochoko, and also blocked US companies, people and banks from dealing with them. Now, these sanctions are not a surprise because president Trump did sign an executive order announcing them back in June, as for why, well, early in 2019 prosecutor Bensouda called for an investigation of American armed forces and members of the CIA citing information that they committed war crimes and crimes against humanity against conflict related detainees at CIA detention centers in Afghanistan, Poland, Romania and Lithuania in 2003 and 2004,.those allegations include abuse, rape, cruel treatment, sexual violence and torture. The US has basically been trying to squash that investigation ever since then.

Mike Papantonio:             So, so at this point, what they’ve done is they’ve, they’ve tried to, well, they’ve attached the assets of these people in the United States. They’ve told them that they can’t come to the United States and if they do, they’re going to be arrested. It just sounds like, you know, it sounds like let them investigate. Let’s see what’s real and what’s not real because at the end of the day, Trump has the authority to actually remove them. I mean, if somebody is arrested, whoever’s arrested, the US government can go in and take them out of detention, bring them back to the United States and there’s really no, there’s really no penalty. So it’s, it’s odd to begin with. What I’m wondering, is there any credibility to Mar to Mark, Mike Pompeo’s claim that the US doesn’t have to cooperate with this investigation?

Brigida Santos:                   Yeah. Secretary of state, Mike Pompeo says the US doesn’t have to cooperate because it’s not party to the Rome statute treaty that created the ICC. Now, technically he’s correct. The US does not have to cooperate, but the international criminal court is the only permanent autonomous war crimes court in the world. And any individual, including US citizens, can be brought before the court, as it investigates alleged crimes that took place in countries that are party to the Rome statute, which would make them subject to the court’s jurisdiction. And in this case, that includes Afghanistan, Lithuania, Poland and Romania, where the alleged crimes occurred. Now, the court can also investigate and where warranted, prosecute individuals for war crimes when countries are unwilling or unable to prosecute. And while Pompeo says the US has its own procedures in place to deal with service members who commit crimes, torture is illegal under American and international law. And yet no one other than former CIA analyst, John Kiriakou, has been prosecuted in connection with CIA torture. And to remind you, he was not in prison for torturing anyone, but for publicly confirming the agency’s use of waterboarding and other torture tactics.

Mike Papantonio:             Yeah. How is this going to impact the future of these kinds of inquiries? Isn’t that what we should be worried about? I mean, you know, it’s a two way street here, isn’t it?

Brigida Santos:                   Yeah. Well, the ICC is still moving forward with the investigation. Now it’s going to be hard to prosecute individuals when the US has so many countries around the world that it can pressure into not cooperating with ICC extradition requests that would bring individuals from the United States to the Hague based court for legal proceedings, because the Hague is not going to be able to come into America and extradite people. They’re going to have to wait for the alleged perpetrators to potentially leave the country, go to a third party country and have that country then extradite them. But the ICC was created in the model of the Nuremberg trials, which also were very difficult, yet not impossible. So we’ll have to see what happens here.