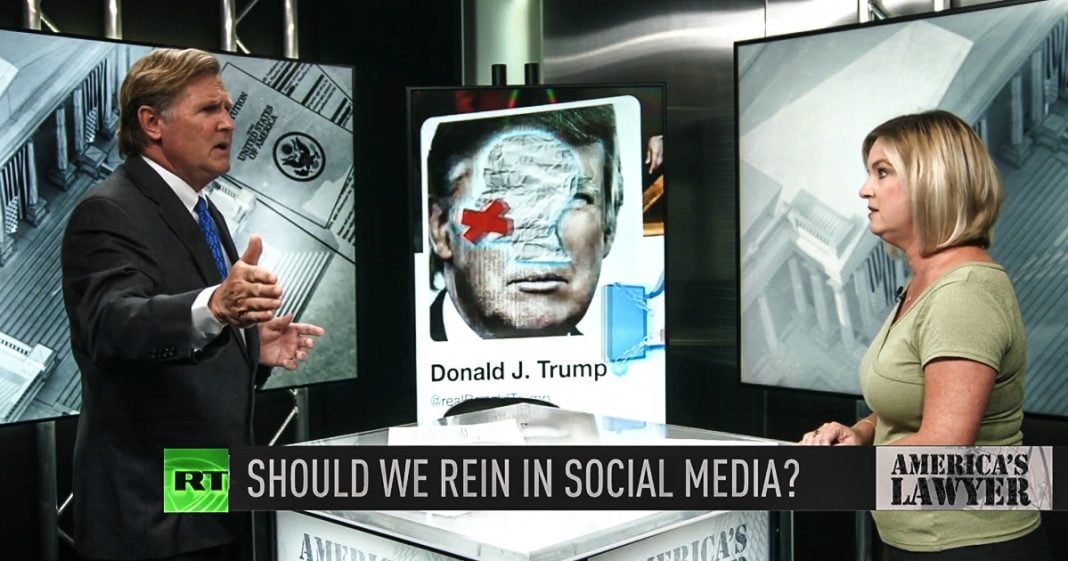 Mike Papantonio:             Social media has been under fire for silencing conservative voices and now several attorney generals are joining Trump in a push to regulate these online platforms. I’ve got legal journalist, Mollye Barrows with me, Molly, who are the AGs that are jumping in on this? Because I mean, this, as I look at this, this has potential to be a, a real big problem for social media.

Mollye Barrows:                Yes, it’ll be interesting to see how far this particular petition goes down the line. Now going back to the AGs, there are four AGs that are supporting this petition that Donald Trump has asked the commerce department to file, basically to put regulation of what, to make it more transparent, the regulation process that social media companies use when they are either taking down tweets or telling people that, you know, whatever social media posts they put on there to make it transparent about why they have regulated a certain bit of information. But it’s for Republican AGs from Louisiana, Texas, Indiana and Missouri, and they are supporting his bid to potentially put this underneath the SECs regulation to hold these basically different social media accounts, providers accountable for whenever they take steps to regulate. Of course, all this came after.

Mike Papantonio:             I, let me tell, let me tell you where I think this heads. I don’t think it just heads where the, where the end of this process is they have to change the way they do business. I think these AGs understand that if they find, if they can find something to penal, to penalize them, to come up with a, you know, you owe us this much money.

Mike Papantonio:             They’re not going to do it simply because Trump’s asking them to. What they’re seeing is they’re seeing some penalties that at the end of this case, they think they’re going to be able to put together. That would be my, my guess. And they have, they have the ability to use criminal investigations.

Mike Papantonio:             Because they’re, they’re, they’re the attorney general. So they have the right to use criminal investigations to get to material that ordinarily we might not be able to get to. So I see this as a lot bigger threat to the tech companies. What, what’s been the response by the FCC in this, I mean, what’s the FCC saying about it?

Mollye Barrows:                When they were looking to bend the rules. It used to be that only a certain number of stations could be owned, for example, by a company in any particular market. And he was instrumental in having some of those rules changed so that particular media companies could own more than one outlet in the market.

Mike Papantonio:             His, his, his goal just, Pai’s goal is just to make it impossible for somebody that has a social media platform to compete with MSNBC, CNN, all the big networks.

Mike Papantonio:             If you go now, just to tell you the impact of it now, if you will go now and look at some of the stories that are coming out from just a, you know, a credible social media platform, you will see underneath those stories covered up with MSNBC, CNN, ABC, all the big networks. Pai brought that about.

Mollye Barrows:                Well, he’s not commented on this in particular. He’s basically going to put it up for public review. Typically the FCC doesn’t regulate. He has said before that they’re not in a position to necessarily, it shouldn’t be their job to regulate social media platforms.

Mollye Barrows:                And I don’t agree though. I think it’s a threat to the exact opposite of what this man who talks about fake news. I feel like it’s the exact opposite. He is empowering whichever political office happens to be in power at the time to basically say, hey, you you’re going to take down my tweet.

Mike Papantonio:             Exactly, and why is it the we, who, who are the people that judge the ideology and say, no, this is not acceptable and this is acceptable?

Mike Papantonio:             Look, you’ve had so many writers talk about the dangers of having these gatekeepers that make a decision what’s appropriate and what’s not appropriate.

Mike Papantonio:             I have love for the idea that journalism requires an open discussion.

Mollye Barrows:                Well, and then you’re right. And they have outlets to hold accountable, these outlets who put out misinformation deliberately and it’s, you know, liable lawsuits and the like.