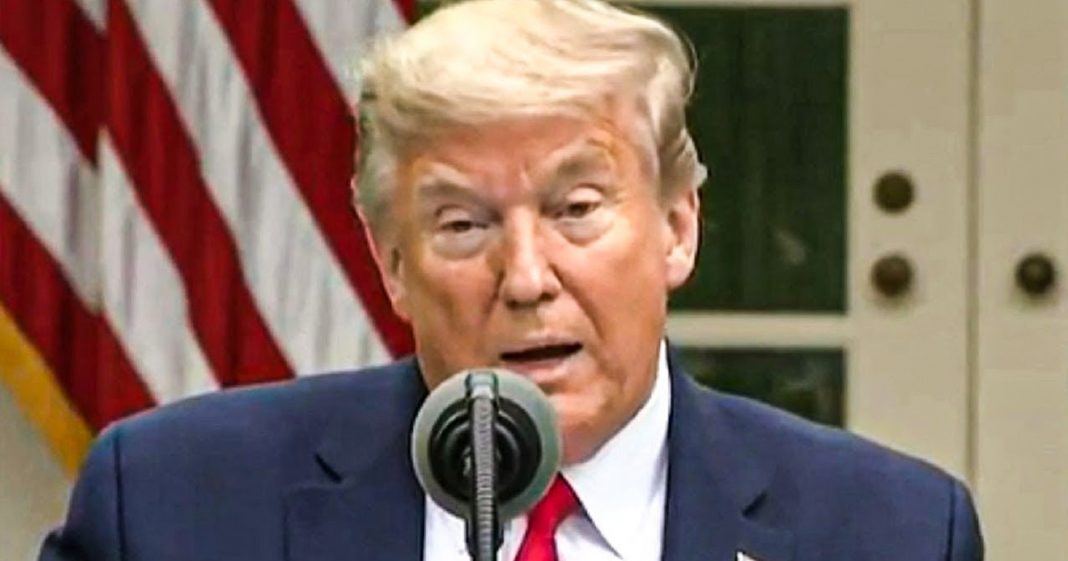 Donald Trump is a fascist and he believes that suspects on the street should be murdered without actually going through the justice system. This is what the President called for over the weekend when he called for MORE extrajudicial killings of suspects that police are after. We have already seen what his supporters are capable of, and there is little question that he is signaling to them to do more. Ring of Fire’s Farron Cousins discusses this.

This past weekend, Fox news aired an interview with judge Jeanine Pierro talking to president Donald Trump. In that interview, Donald Trump not only endorsed the idea of extra judicial killings, which is when an officer or a federal agent, whatever it is, just kills the suspect instead of arresting them and allowing them to go through the justice system. Not only did Trump endorse the idea of this, he actually called for more of it. Now, that kind of sink in for a little bit where we have seen since may and it plenty of other times in recent history, civil unrest, breakout due to the fact that police officers, rather than doing their job and detaining a suspect, apprehending them, taking them in booking them and going through the usual routes that they’re supposed to. Uh, they just killed them either intentionally or through negligence, just killed them whole country right now.

I mean, the way corporations operate has actually changed as a result of the civil unrest that has taken place here in the United States, since just may and here we have the president of the United States coming out saying not only was it okay that, uh, the recent guy got killed. And I’ll tell that story in a moment, but we actually need more of it. So if you had any doubt left in your mind, whether or not the United States was still a, a Republic or if it was a full blown, fascist dictatorship. Yeah, we we’ve said goodbye to the days of Republic. We we’re in fascism territory now with the president saying, kill them all and let God sort them out. So the issue that Donald Trump was specifically referring to, uh, was a protester from Portland, Oregon, um, recently killed a member of the, uh, Patriot prayer group. Uh, and he did it according to him, according to an interview, uh, that he actually gave, uh, in self defense. And so time passed and according to Trump’s interview with judge Pirro, he told us marshals, go get him. In fact, here’s, here’s Donald Trump’s quote. I put out, when are you going to go get him? And the us marshals went in to get him. This guy was a violent criminal and the us Marshall’s killed him. And I’ll tell you something, that’s the way it has to be. There has to be retribution.

There has to be retribution. Now, for those of you who are not familiar with the term, that means revenge, our justice system here in the United States. It’s not built on revenge. It’s not built on, on vengeance or vigilante ism. It’s based on justice and due process. Meaning in order to secure a conviction in order, put somebody in jail in order to actually even charge somebody, there are lots of little steps along the way that you have to take so that we don’t end up with Donald Trump’s jackbooted, thugs, walking through our streets and killing people that they don’t like. And then later just saying, yeah, uh, we thought that dude was drug dealer. So I figured which may we’ll pop him right now. That’s the kind of things you see happen in banana republics. That’s the thing that happens in all those countries that the United States goes over there.

And, uh, you know, says we’re going to bring democracy and liberate them. Cause they’re killing their own people. The president of the United States, just, just advocated for that in an interview on Fox news. So when, when can we expect another country to come in and try to liberate us from the dictator that we’re currently living under? I’ve never in my lifetime, as bad as things have been under previous presidents, never thought we would actually see a day where a sitting us president said, hell yeah, there’s gotta be retribution. You killed one of ours. We’re going to kill one of yours. Is that the way this works? Like, like gang violence, like biggie and Tupac at this point, is that what we’ve become as a country, East coast, West coast?

Or are we going to be a nation of laws? We have a very pivotal choice to make right now, folks, this isn’t hyperbolic. Even either the president literally literally said these things. Oh, and by the way, the guy that started this whole conversation, the one I mentioned who killed the Patriot prayer guy, uh, the U S Marshall shot him while he was walking to his car cell phone in one hand, eating a gummy worm with the other. But according to the U S marshals, he, he produced a firearm. According to the witnesses, not even close cell phone and a gummy worm, they didn’t even try to apprehend him. They didn’t tell him to stop.

It’s likely that he didn’t know they were there. That was an assassination carried out at the request. As Donald Trump said by the president of the United States, he said, I put out, go get him. And they went and got him. I swear to God, once this administration ends, we need Nuremberg trials here in the United States because all of these federal authorities, these, uh, USA agents, military members, U S marshals, whoever has gone on the streets of their own country and fired their weapons at American citizens, gassed American citizens in the streets or arrested American citizens for doing nothing more than exercising. Their first amendment rights. Every one of them needs to be locked up because they can claim. We were just following orders, all they want, but that didn’t work in Nuremberg. And that’s why we need to have the same kind of trials here in the U S once Trump finally gets out of office.