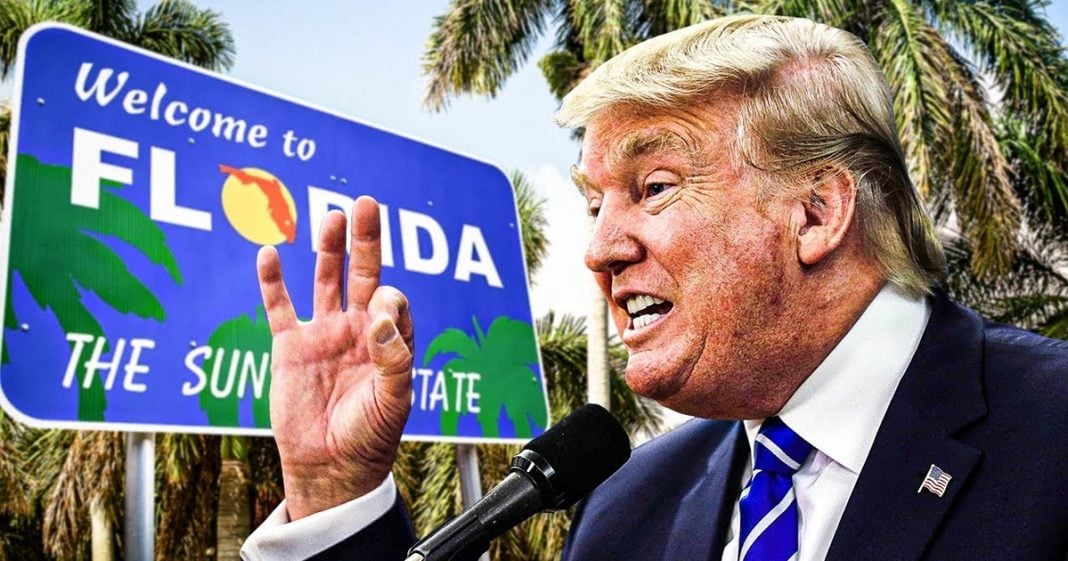 Late last week, a federal court decided that it was perfectly fine for Florida Republicans to require former inmates to have to pay what amounts to a “poll tax” in order to regain their right to vote. This could easily sway the presidential (and other) election in a different direction, as it could effect more than 700,000 potential voters. Ring of Fire’s Farron Cousins explains what’s at stake.

On Friday of last week, the 11th circuit court of appeals ruled that Republicans in the state of Florida can effectively try to rig the election for Donald Trump now. Okay. That’s not exactly what the court said and their six to four ruling, but what they did say in the ruling was that the oppressive poll tax that Florida Republicans had put in place in 2019, uh, that could stay in effect. Anybody who doesn’t already know the backstory, where the hell have you been, but, okay. I’ll actually tell you the backstory 2018 on the ballot, state of Florida ass voters and amendment to the state constitution, should former felons be given the right to vote back, uh, by more than 60% the motion passed. So yes, former felons in the state of Florida could now register to vote and vote. Well, the Republican controlled legislature here in the state of Florida decided, Nope, that’s really going to screw us.

If we add 1.4 million new voters to the rolls here in Florida, uh, as no election in recent history in the state of Florida has been decided by more than 1.4 million votes. In fact, most of them have been decided by tens of thousands, not even hundreds of thousands, so easily adding 1.4 million new voters to the rolls here in Florida switches, uh, you know, which way the state goes possibly forever, or at least a generation or so. So the Republicans that control our legislature said, we can’t have this happen. How can we stop it? And they said, let’s say you can’t register to vote again, even though we legally have to let you, unless you’ve paid all your court fines and all the costs and any other things essentially associated with your incarceration and prosecution. Also, we, the state of Florida, we don’t really have a good system to keep track of who owes what, and who’s actually paid it off. So Hey, even better. Right? Cause a lot of people who have paid it all off, they really can’t prove it. Cause it’s not in our system because we don’t really have a system for it. It’s individual courthouse by courthouse where that

Stuff’s kept. Okay. So they passed that law in 2019 are idiotic Trump, loving governor Rondi Sante signs it into law. It gets shot down after, by, uh, by court, after court, after court until last Friday, the 11th circuit said, hell yeah, let’s keep them from voting with the poll tax. So this means that roughly 774,000 former felons who have 21 days as of right now to register to vote before the cutoff for this year’s election, can’t do it. It’s about half of the former felons who got the right to vote back. So I hope that all 700,000 of the people who don’t owe any money, I hope they all registered to vote. And I hope they remember which party here at the state of Florida tried to keep them from voting because it wasn’t the Democrats, not at all it 100% the Republicans because they fear the power that 700,000 new voters would have.

And they understood that it meant the end of the monopoly that they have had on Florida politics for decades. The damage they have done to this state, both economically and environmentally could have been at an end, Florida being considered a swing state could have been over with, could have been solid blue, which would absolutely reshape the future of American electoral politics. And Hey, maybe even get some Republicans on board with abolishing the electoral college, right? But now, even though this ruling is going to be appealed 21 days to go before the election, these 774,000 people are not going to be able to get the vote. Oh, and by the way, the screwed up system that I mentioned, you know, not only do we have a very poor way of keeping track of who owes what the, a court in their ruling also said, the state has no obligation to tell people how much they owe.

So even though the state can force you to pay it, the state doesn’t have to tell you how much it’s owed. Uh, this, this is a judicial malpractice is what this is. These judges do not deserve to be on the bench. They should be removed and disbarred. Um, but nothing will ever happen to them because they have lifetime appointments. Cause we’re court system is ass backwards. And so that’s just, unfortunately the way it is, it’ll be appealed. Hopefully it’ll get shot down again. And hopefully these people get the right to vote back. Not just because it’s going to help turn the state blue, but because these people paid their debts to society and they’re owed their rights back.