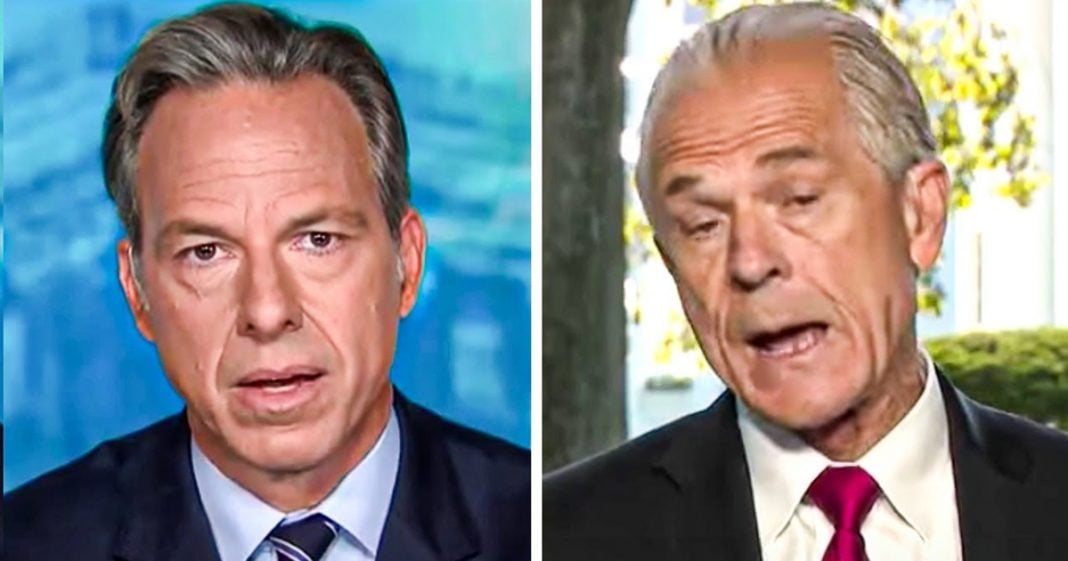 Jake Tapper of CNN had to kick Trump adviser Peter Navarro (trade adviser) off of State Of The Union on Sunday morning after Navarro repeatedly refused to answer questions about why Trump lied to the public about the pandemic, as revealed by the Woodward audio. Navarro danced around the issue, made some false accusations about Democratic governors and mayors, and then lied about what the administration was actually doing. Ring of Fire’s Farron Cousins explains what happened.

On Sunday, Donald Trump’s trade advisor and economist, uh, Peter Navarro decided to go on Jake Tapper’s program on CNN state of the union. And, uh, you know, they were going to talk about the, the Woodward tapes that came out this week and Jake Tapper, like most Americans wanted to know why the president lied to the American public. You know, he knew one thing behind closed doors set a completely different thing to the public, told us not to worry. He told us not to listen. And Tapper just wanted to get some answers from Navarro for the American public and not surprisingly Navarro was unable to provide any answers to any of a Tapper’s actual questions. He provided answers, but not answers to the questions. And so Tapper ends up getting pissed off, kicks Navarro off the set, quite an interesting exchange. Take a look at what happened.

Now, as I mentioned, and as you can kind of see in the clip, Navarro does in fact answers some questions, just none of the ones that Jake Tapper was asking. So I don’t know what answers he was giving to which questions because we never, we never got to hear any of the questions that he was answering be asked because he was sticking to a set of talking points and did not want to deviate from the script. And you know what? This tells us folks, this tells us that everyone in this administration is being highly coached on how to handle this situation. What do we tell the press? How do we respond to this question? How do we respond to that one? But unfortunately the one thing you can’t be taught is spontaneity. You know, the way to really kind of craft your, uh, structured talking point into an actual answer for the question while still sticking to your script.

But also technically addressing the question that was asked. Um, that’s really not hard to do. You can easily start to answer and redirect it. Uh, we see people do this all the time, right? And left and interviews and you’ll watch any cable news. Show people go there with talking points. They know what they want to say, and they know how to get to where they want to go to say it. But these people from the Trump administration, they’re not even trying, they’re not even trying to make it look like they’re not, you know, reading off of these prepared talking points that they have in their brains, because that’s what we saw in that clip. That’s what we saw. If you were unfortunate enough to watch the whole, you know, a nine or 10 minute clip there,

It’s really awful because Navarro keeps trying to hammer on the same points. Like we did this and we did this and China lied and DeBlasio lied. And everybody in New York lied Cuomo, Leiden. Tapper’s just like Matt. No, no, no. It’s kind of hard for anybody else to tell the truth when they’re being lied to by the administration. You know, how do you expect these other guys to tell the truth when they don’t realize that they’re receiving lies? They see as kind of hard, kind of hard to do. And as for the China lying about anything thing, first of all, we don’t know that even for sure. I know that’s a big right wing talking point to excuse Donald Trump’s behavior that China lied about their numbers. And sure. They probably did. We have one, no way to prove that they did in two. It doesn’t matter at all one bit if they did or not, that doesn’t affect anything that happened here in the United States. And I don’t know why these idiotic, Magda hat wearers can’t seem to get that through their heads. If China lied, if China didn’t lie, how does that change? What Donald Trump didn’t respond?

Because by the time He did here in the United States, we had already seen it ravaging other countries, right? Did we think China was lying and Italy was lying about it? Hm, because it’ll, He was pretty much hit hard before we ever really saw cases here in the United States really start to take hold and spread. So even if China had been lying, we could have looked at Italy instead and said, Oh crap, we should probably do something about that, but we didn’t do that either. Nope. We listened. Donald Trump lied to us from day one. And that’s why we’re in the situation we’re in now. So good luck by the way, Peter Navarro sticking to your scripted talking points. Got you kicked off CNN. And to be honest, I would like to see more networks do this, not just with Navarro and not just on this issue, but with anybody from this administration who continues to dance around the questions that are asked, if they’re not going to answer, kick them off and bring on somebody who might actually have something of substance to talk about.