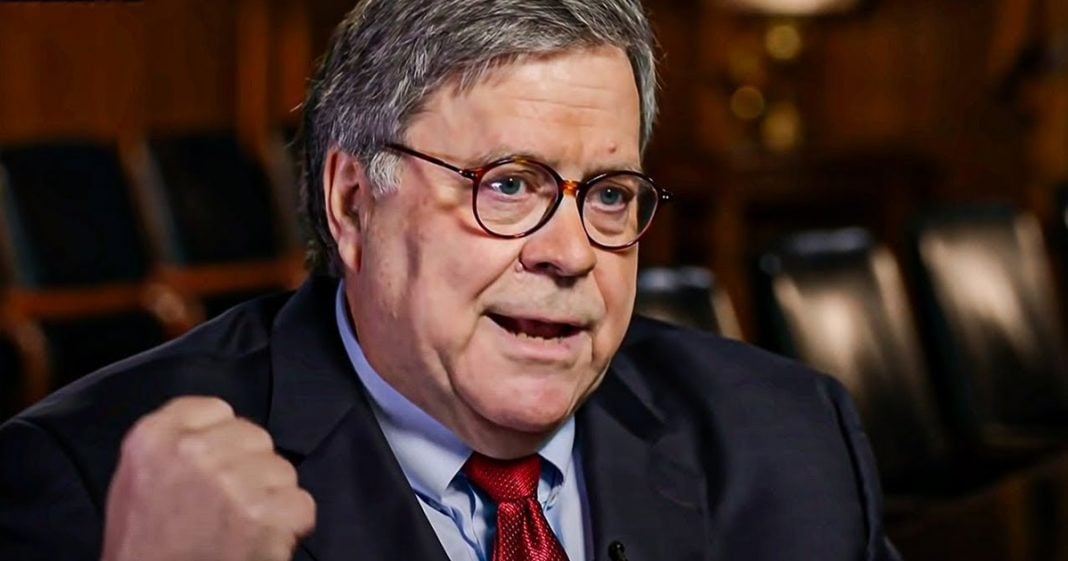 We now know what the “October Surprise” is going to be in this year’s presidential election: Attorney General William Barr is having his hand-picked prosecutor release an interim report about the Russia Investigation before the 2020 election. This was something that Barr and Trump had been wanting, and they are apparently fine with breaking the DOJ’s own protocols and rules in order to get it out. Ring of Fire’s Farron Cousins discusses this.

That’s going to be out before the election. An interim report means, even though he’s not done, we’re going to have him go ahead and put together what he’s found. And we’re going to release that before the election, because we think it’s going to hurt Joe Biden. We think it’s gonna hurt the Democrats across the board. This isn’t normal. This is not something the DOJ does because it’s actually not something that the DOJ has even allowed to do. They are not allowed to interfere in any way with an ongoing investigation. Even if it’s one they’re conducting, they cannot go and tell the person running it release an interim report to public that’s against protocol. Releasing results of an ongoing investigation is against protocol. It’s against the very rules that the DOJ is supposed to follow, which is ironic. Considering the fact that this is an investigation to see if the DOJ actually followed the rules, but they’re breaking the rules in order to tell us if they broke the rules of the DOJ, what the heck is going on?

Seriously, we were living in crazy town. The whole United States is now crazy town. And bill BARR should be impeached. He should be removed. And every Democrats sitting in the house of representatives, I don’t care who you are, how great you’ve been. You gotta be at least a little bit ashamed of yourself. And Nancy Pelosi has to be exceptionally ashamed of herself for not moving forward with impeachment against Barden Adler too. Cause now there was one who in a few months ago said, no, no, no, we’re not going to do that. You messed up like, this is on you at this point, bro. But here’s the kicker like this whole thing right now is kind of a big told you. So moment told you, so told you this would happen. Um, God, I was still in the regular studio. So that has been early March. At least when I literally this exact same thing would happen, then I did it again early summer.

Then I did it again. When I talked about bar like two weeks ago saying, Oh no, we’re not going to release. I said, yeah, you are. And now here he’s finally admitted what everyone could have predicted, okay, this is not something that, Oh my God, I’m a Sage. No, this was incredibly predictable by anybody with a brain. We knew this was going to happen. And I’m not even saying by the way, I don’t think there was any impropriety in the Russia investigation. I don’t, Oh, they didn’t like Donald Trump. And they were having an affair. Fantastic. Not illegal. Doesn’t change the outcome of the election. It doesn’t change the facts that led to an, uh, an investigation either. So yeah, whatever Durham is going to release and I’m sure bar’s probably gonna be the one to do it. It’s going to be a handful of nothing, but it’s going to be nothings that they can spin into some things kind of like comi, which by the way, comi was allegedly fired.

According to rod Rosenstein for literally doing what they’re about to do to tank Joe Biden. You know, coming out days before the election saying we’re investigating Hillary only to find out that one, you, you weren’t investigating Hillary and you just decided to do it for the hell of it. You didn’t need to, but she did it to interfere with the election. You know, that’s the real election interference, by the way, we should probably, uh, do something about, um, and bill BARR says, I’m gonna do it again. I know it’s I know it’s against our own rules. I know Comey was fired for it, but Hey, who are we in this administration? If not just a gaggle of hypocrites with no morals, just a strong desire to stay in power and they will do whatever it takes to keep that power. And that is the most terrifying thing of all.