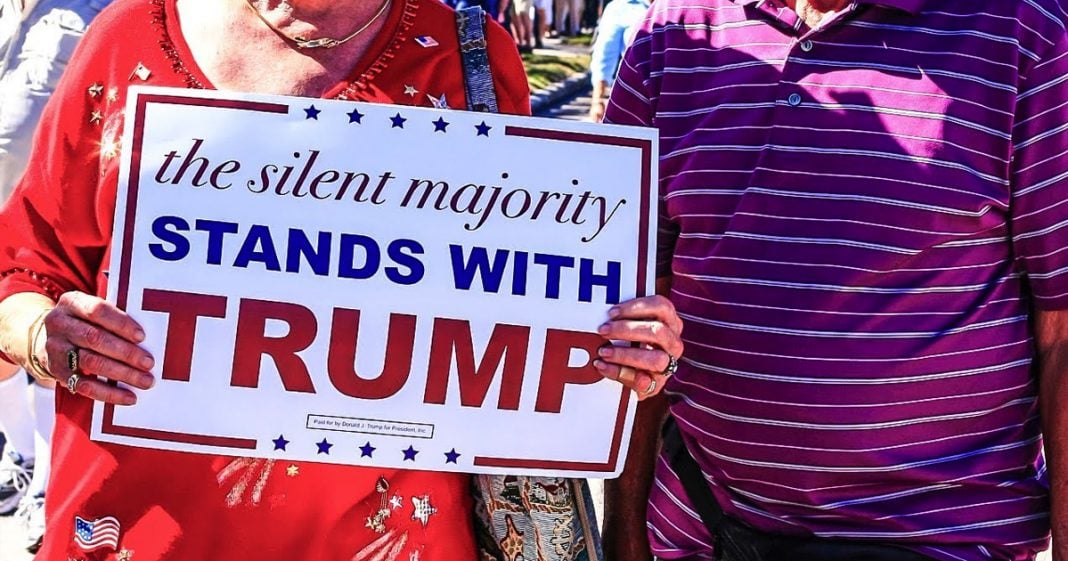 According to a new Monmouth poll out this week, a majority of Americans believe that there are “secret voters” in communities who are going to swing the election for Donald Trump. These are people that are too ashamed to admit to pollsters that they are voting for Trump, and that’s why he is likely to outperform the polls on Election Day. Ring of Fire’s Farron Cousins discusses this.

A new poll out this week from Monmouth university, uh, reveal some quite shocking to be honest information about how the public is already viewing the 2020 presidential election. In addition to most of them believing that, uh, what the polls are telling us now is not going to be reflected in the election results. Uh, there’s also a decent amount over a third of the country believes that Donald Trump is going to cheat in order to win. Shockingly enough, a quarter of respondents think Joe Biden is going to cheat to win the 2020 presidential election. But the most interesting part is the fact that a majority 55% of respondents in this Monmouth university poll 55% believe that there are these people. They call secret voters out there who are going to end up swaying the election for Donald Trump. And this also ties back into why they think the election results are going to be different than the current polling shows much like what we saw to a degree in 2016.

If you only think of it, electorally and not popular vote wise, uh, the polls up to 2016 for the most part did reflect what the popular vote was. Just didn’t reflect what the electoral vote was. They were off still, but not by as much when you consider popular versus electoral, but that’s neither here nor there, unless you want to deal in facts. Nevertheless, 55% say there’s these secret voters out there. So who are the secret voters? Secret voters are people who are too ashamed to admit to pollsters that they support Donald Trump. Now, believe it or not, these folks did exist in 2016. And there were obviously plenty of people who told the pollsters whenever they would call whatever they filled something out online that, yeah, no, no, I’m a, I’m voting for Hillary. I’m a Hillary person. I’m definitely not voting for that Donald Trump guy.

And it’s because they were actually embarrassed about the fact that they supported Donald Trump. And I think there’s actually, by the way, a lot of merit to this theory of the secret voter, excuse me, I live in a very, very, very, very red area. Uh, in Northwest Florida here. This area has not voted for a Democrat since the election of John F. Kennedy in 1960. It was the last time this area voted blue. Um, I don’t see all that many Trump signs in the yards compared to elections past where you saw all the Romney signs, all the McCain signs, you literally still see cars driving around with the w stickers on the back of their car. Now purely anecdotal, right? Purely anecdotal, other than the fact that Donald Trump won this area by a massive, massive margin.

So they’re here. They’re just not advertising it the way they advertised in the past that I support McCain. I support Romney, little more shade with, with Trump fellows. So yeah, I do believe that the secret voters exist. And I do believe that once we, uh, see the results of the 2020 election, it is not going to match up completely with what the polls are telling us. The question is how many secret voters are there? And let’s not even call them secret voters. That’s actually making, uh, making them sound a lot cooler than they are embarrassed voters. How many embarrassed voters are there? How many of these liars, how many of these little snakes are there that are too cowardly to say publicly, that they support Donald Trump, but more than willing to go in there and cast their ballot forum. If you’re going to do it own up to it, if not, then don’t even bother voting or maybe find somebody else. If you were ashamed for who you’re voting for, that should be your first indicator that you’re voting for the wrong person.