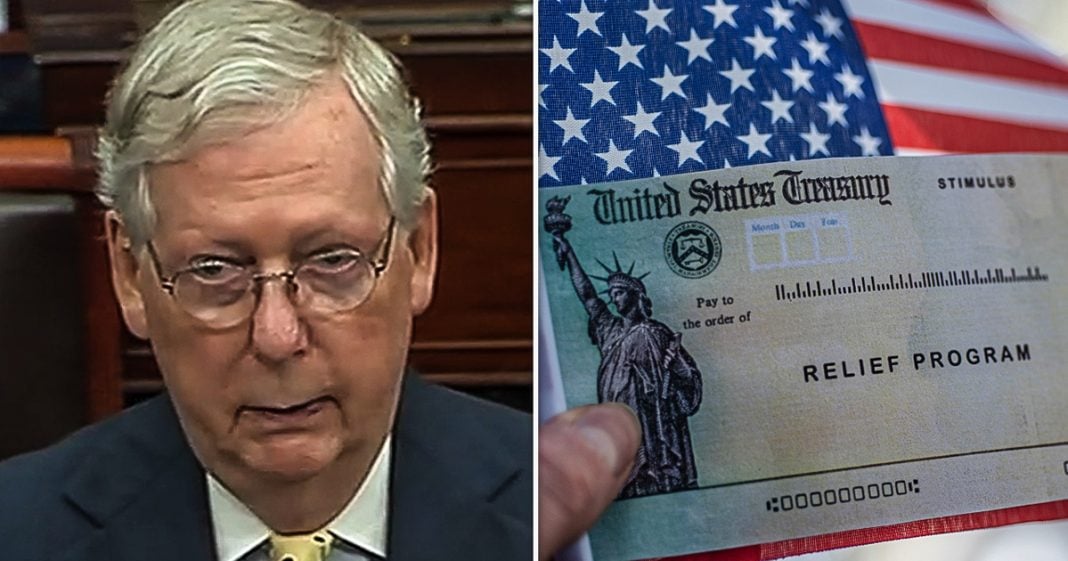 Republicans in the Senate have declared that they aren’t going to deliver another relief bill until at least after the election. This came shortly after Senate Democrats blocked the “skinny package” the Republicans had put together that included major bailouts for corporations and no stimulus for working or out-of-work Americans. This block needed to happen, but the fact that Republicans won’t work on another package shows how petty they are. Ring of Fire’s Farron Cousins discusses this.

So yesterday Democrats in the Senate have voted down the Republican skinny relief package as it’s been called a they’re calling it the skinny package. Cause it was supposed to be like a stripped down bare bones. Let’s help the United States get through next couple of months of coronavirus, but really what it was was a nother corporate bailout. It included over a, I think a hundred million dollars, maybe $160 million, uh, just for the coal industry in that particular piece of legislation, $160 million for the coal industry, which makes no sense at all. Unless you remember, of course, that this thing was drafted by Republicans who only care about bailing out corporations. There was no direct payments to Americans. There was no extension of the unemployment benefits. There was no moratorium on evictions. There was no rent relief, no rent help, nothing that would actually benefit the people who are actually suffering throughout the pandemic.

So Democrats rightfully voted the whole thing down so that we didn’t spend a couple billion dollars bailing out corporations that don’t even need it. And so Republicans have now said, well, that’s it then no more folks. That’s the end of it. Because Republicans have said one at this point, there is no chance of getting another relief package before the election. What they didn’t say is that after the election, they have absolutely no reason to pass a relief package because it will be after the election. So if you were counting on getting another stimulus payment, which we desperately need, that will never happen. You’re never going to get it. Now, the hope of that is dead, dead because Republicans in the Senate won’t let it happen. I guess maybe there’s a small chance. It could happen. If Joe Biden wins the election and Democrats retake the Senate and they retain control of the house, maybe we can get another stimulus in February of next year.

How many people are going to lose their homes in that amount of time, we have not recovered all of the jobs that we lost. We haven’t even recovered half of them. So we still have more than 20 million people who lost their jobs at the onset of this, a recession and pandemic that haven’t gotten them back. We’re in a massive economic downturn, a full blown recession. And the Republicans say, well, you wouldn’t let us bail out corporations and not help the public. So you don’t get squat. We’re done. We’re packing up. We’re taking our books and going home, whatever it is, these people need to be voted out. Every single one of them, every single one of them, Mitch McConnell has not done a single good thing for the people of the United States throughout his entire career. And I welcome anyone to send me an email, find it on my Twitter. Uh, send me an email and tell me one good thing, Mitch. McConnell’s done that actually benefited the people of the United States. Not just a little town in Kentucky, not just, you know, Republicans. I want to know something he has done. That’s actually benefited the people of this country. Feel free to email that to me, I’m not thinking my inbox is going to be overflowing.

They have to go. People are suffering and yeah, sure. There’s plenty of Democrats too, who are against sending more aid to people they should go to. I’m not trying to be overly partisan here, but a lot of the problem is Republicans. If we do not help the people who’ve lost their jobs. If we do not help the people who are facing eviction, if we do not put cash in the pockets of the people who actually spend it, we are going to be looking at an economic situation that is far more bleak than anything we have seen in modern times. That is not, you know, uh, some far off pipe dream either. These are things that could easily happen within the next six months. If we don’t put cash in the hands of the people who need it, it’s not hard to do. We have the resources available to do it. We just don’t have enough people in DC with the fortitude to make it happen.