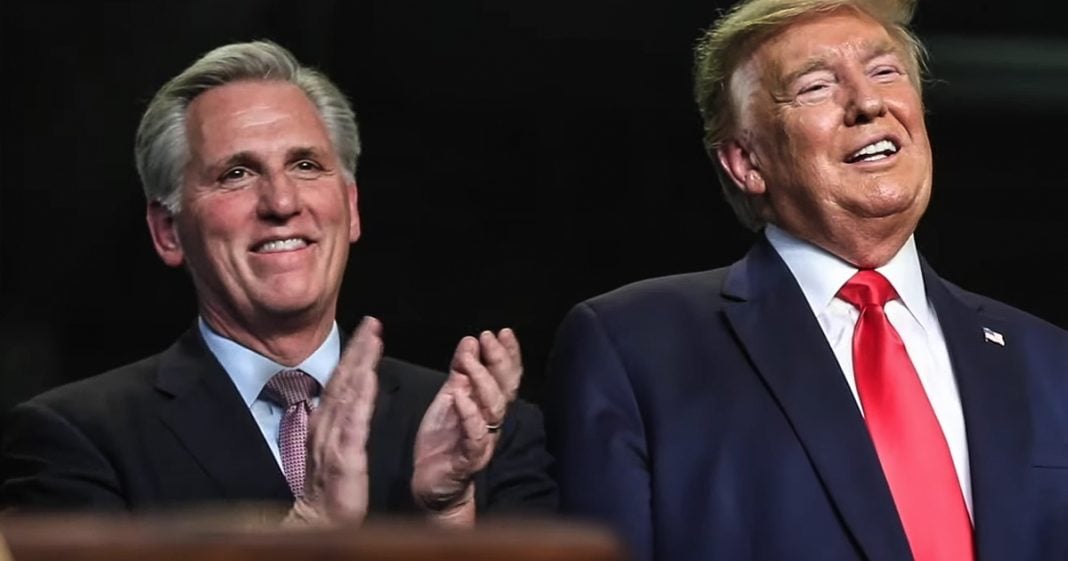 Republican Senators always knew that this year was going to be tough due to Trump’s unpopularity, but now they are even more concerned that Trump is going to cost them big time in November. According to reports, Republicans in Congress believe that Trump’s repeated attacks on vote-by-mail are going to cause large portions of the Republicans base to NOT vote by mail, which likely means that they won’t vote at all. Ring of Fire’s Farron Cousins explains what’s happening.

Republican house minority leader. Kevin McCarthy has now, uh, according to reports joined the quote growing list of Republican lawmakers who are terrified that Donald Trump has irreversibly damaged their chances of winning anything. This coming November and here’s what’s happened over the last month or so we have seen more and more Republican lawmakers come out, uh, either publicly or to the president himself, asking him, please stop attacking, vote by mail. We have a very large percentage of our base that votes by mail. And when you come out and say that it’s, it’s not safe, it’s not secure. It’s prone to fraud. Your ballot could get stolen or lost or destroyed or changed. What you’re doing is you’re convincing, uh, actually most of the elderly Republicans that they can’t vote by mail because it’s not going to count anyway. And so Kevin McCarthy, uh, this past week or so came out and said, look, you can’t do this. You’re killing our chances of winning anything in November because it’s our people that are going to be like, Oh, I guess I can’t vote by mail. The other side, isn’t convinced at all, like Donald Trump’s attacks on voting by mail have not changed the minds of any Democrats at all, but they have changed the minds of Republicans.

That’s the beauty of all of this, by the way, you know, it’s kind of like the same thing with all the, the, the protest, the riots, all of that, you know, he’s out there. All of Republican media is out there trying to convince us that, Oh my God, things are terrible. But the only people they’ve convinced things are terrible or actually Republicans. They’re the only ones who are fearful, who think, Oh my God, I’m going to go out in the street and be murdered here in Orlando, rather than where the things actually are. The average everyday people say, Oh, well, that’s actually not happening here. It’s actually only happening in like two places in the country. Three. Maybe it’s not as bad as what they’re saying. And most people, vast, majority of people understand that. And it’s the same thing with vote by mail. Now Trump did come along and people understand this and he had, kneecapped essentially the post office.

So they’re concerned about that. They’re concerned about their ballot, not making it in on time, but they’re not concerned about it being stolen about it being forged or about any of these other ridiculous things that Trump has warn them about. But the elderly conservatives, according to Republican lawmakers, they are concerned and they don’t trust it. Now they’ve been doing it for years and years and years, but suddenly because Trump came along and scared them to death about it, they’re not going to do it. And McCarthy actually warned, we can’t win the election without elderly vote by mail constituents. That’s kind of the heart of the GOP, the people with one foot in the grave, Nobody else likes us.

And the reason for that, by the way, in case you’re wondering, let’s do a little psychology slash history lesson here. Why it’s typically the older voters who always go for Republicans because Republicans run their campaigns based on fierce, psychological studies have shown that as people get older, they do in fact grow more fearful, not necessarily every single individual, but as a whole, they do. Their bodies simply are not capable of doing the things they used to. They cannot defend themselves in the way that they use to the reaction. Time is slower. That’s what happens with age. So they’re a little bit more cautious, a little bit more fearful, and that’s why they go for the party that prays on fear. That’s how that works. Studies have proven that. Um, and now they’re afraid of vote by mail. The thing they’ve been doing for years with no problems, the thing that actually is not problematic Trump in his effort to prevent Democrats from voting had the opposite effect. Democrats are now more determined to vote than ever. It’s the Republicans that are too afraid to cast a ballot.