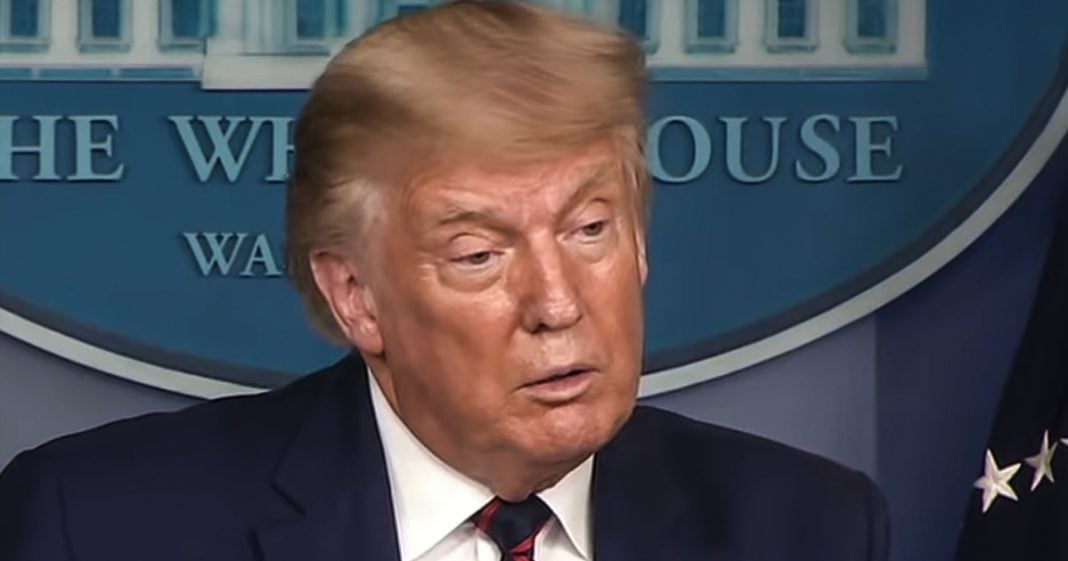 After Donald Trump’s latest assault on social media outlets, four Republican Attorneys General have joined in to call for tighter regulations against social media outlets to prevent them from removing content (specifically Trump’s posts for being factually inaccurate.) Republicans can’t have it both ways – they can’t expect these social giants to give them larger platforms and then complain when their influence is something that has to be regulated. Ring of Fire’s Farron Cousins explains what’s happening.

So last week, Donald Trump got upset because he was once again, fact-checked, uh, by social media outlets when he posted incorrect information, once again about voting by mail. So he decided that he wants to really crack down on social media outlets. And he actually expressed his intention of further regulating these social media giants in order to prevent them from taking down posts that they allegedly disagree with. Shortly thereafter, He was joined by four Republican attorneys, general, uh, attorney generals, uh, Texas, Louisiana, Indiana, and Missouri, all joined in to Donald Trump’s call to regulate social media outlets so that they cannot remove your post just because they allegedly disagree with it. Now let’s get something straight here. These social media outlets, whether it’s Twitter, Facebook, what have you? Um, they’re not doing it because they just disagree with it. I know Republicans keep saying that, but just because they keep repeating something, doesn’t make it true. Uh, what they’re doing is they’re preventing you from intentionally spreading misinformation with the purpose of confusing and misleading the public, because you’re not doing it accidentally like, Oh my God, here’s a piece of information. Oops, it’s false. I’m so sorry.

I wish you’ll, you know what you’re spreading is false and you’re doing it because you want the false information to take hold. And that is something that these social media outlets finally said, okay, enough is enough. You’re the president. You can’t sit there and just lie to the people about something like voting, but that pissed Trump off. He was humiliated. To be honest, I think that’s what this is. It was a big, massive blow to his ego. So he said, Oh, hell no, I’m the president. And I’m going to take you to task for it. And the four Republican attorneys general joined in and they said, quote, um, social media platforms can not be free. Cannot be truly free. Unless the participants understand the rules of the forum and competition is able to provide alternatives. When speech restrictions go too far as social media platforms cannot truly be free. They say, Okay.

Here’s the thing. Uh, they don’t have to be free. They’re not governments. They don’t have to allow you to say whatever you feel like you can say, these are private companies that thanks to Republicans in their court rulings. They can pretty much decide who can be on their side and who can not, who can say what and who can not, what can you say? And what can you not? Uh, y’all put the together to allow for this to happen. And now you are the ones getting punished by it because you’re the ones that want to break the rules. You gave them free reign, not just social media outlets, but pretty much any corporation out there. Any company, big, small and everything in between to say, I don’t like your beliefs. Don’t come to my store. I don’t like the way you are. You can’t come to my store.

As long as of course, it’s not somebody with a disability because they’re protected by the federal government. Anything outside of that, Republicans have fought diligently to make sure that corporations can say, thanks, but get the hell out. I don’t want your business. And now that it’s finally affecting them, but not because they don’t like them, but because they don’t like liars, they’re switching it to say, Oh, it’s not because I’m a liar. It’s because I’m a Republican. But that, ain’t what it is. Folks. These people are gaslighting a country right now. They know why they’re getting in trouble, but they’ve convinced enough gullible American citizens that it’s not because they’re, they’re shameless liars. It’s because they’re Republicans that these websites are picking on them. That’s not what’s happening. It’s because they have a duty based on their position, based on their elected position, to tell the people the truth and the social media outlets, as horrible as they may be. At least in this one issue, they have finally stood up and said, Nope, we’re going to do what the media won’t do, but should do because it technically is their job. We aren’t going to fact check your ass every time you lie to the public. And we’re going to make sure we call you out on it every single time.