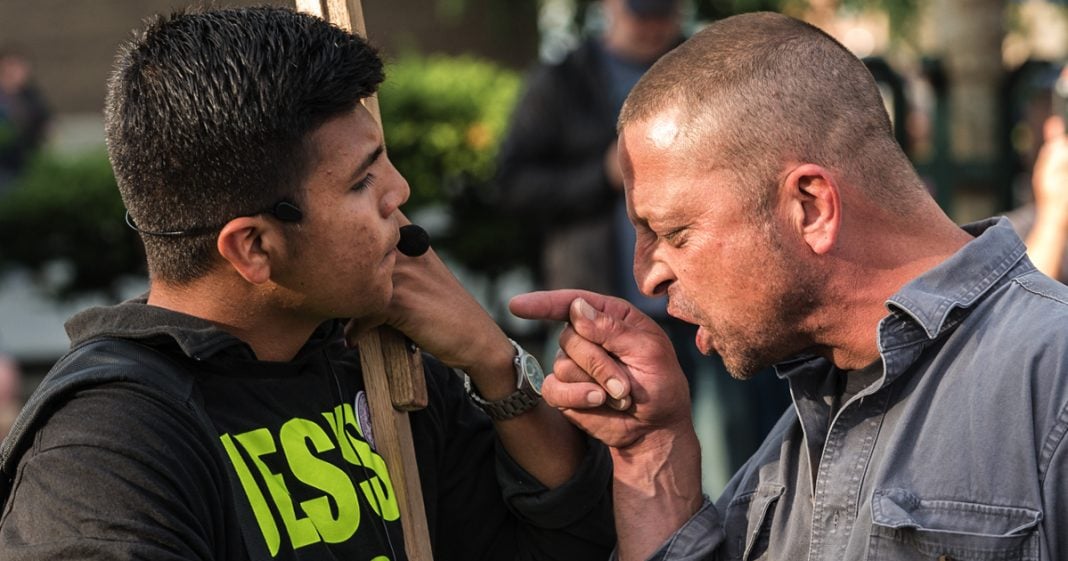 Whether Trump wins or loses, the experts who spend their time monitoring right wing extremists believe that we are going to experience a very serious wave of violence from these individuals. They will feel emboldened if Trump wins, and they will feel threatened if he loses, and both outcomes are going to lead to disastrous consequences for American citizens. Ring of Fire’s Farron Cousins explains what’s happening.

According to the experts. These are people that run organizations, uh, both independent, all college campuses that track hate groups here in the United States. According to these folks, if Donald Trump wins in November, we are very likely going to see a major spike in hate crimes being committed by Trump supporters. They’re also letting us know that if Trump loses, we’re likely going to see a major spike in hate crimes and violence from Donald Trump’s supporters. Basically what these experts are telling us is win or lose Trump’s supporters. The hardcore ardent white supremacists Trump’s supporters are going to go nuts no matter what, here’s the way it works. Obviously, if Trump loses, they’re going to feel, they got cheated. They’re going to be angry. They’re going to go out and let their anger be known. If Trump wins, they’re going to feel emboldened. They’re going to feel like they have a right to do these things to others. And that is why it’s going to increase. And the whole reason for this is because Donald Trump has given these people a voice. Donald Trump has legitimized these individuals throughout his campaign back in 2015 and 2016. When he got up there on stage and said, immigrants, Mexicans want to come to the United States and rape and murder you.

That’s what he said. That galvanized, that group of otherwise marginalized individuals. You know, the people that you wouldn’t give the time of day, the people that you didn’t want in your party. Trump invited them in with open arms and said, welcome, have a seat at the table, be a part of us. And that is what kickstarted, everything that we have seen since then, his remarks after Charlottesville, there’s some very fine people. He knew what kind of people. They were very few people in this country would define them as very fine people, but he did. And he meant it. He meant it because he knew those were the people who loved him. And over the years, it’s just gotten worse. He has empowered them. He gave him a voice. As I said, he gave them a seat at the table and now they feel like they legitimately are entitled to it. They’re entitled to do the things that they’re doing hate crimes have increased. I mean, that’s not an opinion. That’s based on the statistics that are readily available. Department of Homeland security’s draft report earlier this week said white supremacy is the number one lethal threat to American citizens.

This is not hyperbole. This is not exaggerations. This is what government agencies and non-government agencies have all independently concluded. Over the last years, they are the threat. The white supremacists are the threat. The neoNazis are the threats, but rather than admonish them, rather than tell them to disappear, Trump embrace them. And now the experts say, we can expect for them to go crazy. Whether the president wins or lose a wins or loses in November, that’s the situation we’re facing right now. Law enforcement agencies have been a little too willing to work with these individuals over the years, as well, even though they know their own internal documents show that they know these are the people that are the real threats. So I don’t know exactly who we turn to to fight back against the coming rage that the experts are telling us is going to happen regardless of the outcome in November. And that folks is a terrifying thought.