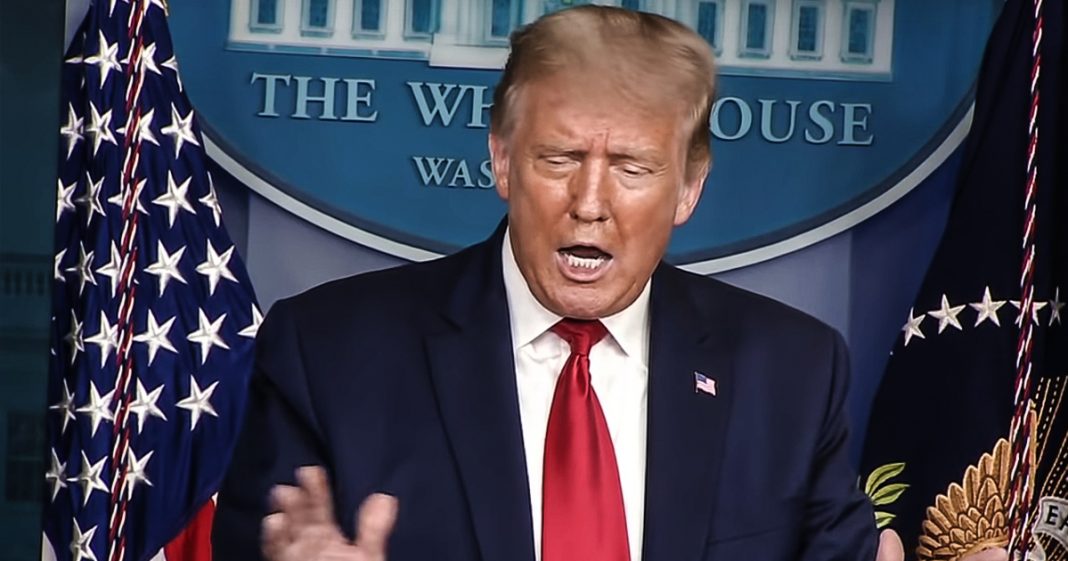 Donald Trump – the man who wants us to believe that he didn’t want to cause a panic among the population – spent the entire day on Thursday trying to create a panic. And in his desperation, he engaged in plenty of racism. The President is not well, and these rantings on Twitter are not the rantings of a sane person. Ring of Fire’s Farron Cousins discusses this.

Yesterday, Donald Trump had a very public and, uh, to be honest, quite racist meltdown on Twitter, but it wasn’t just one meltdown. He actually suffered multiple different meltdowns all throughout the day. So let’s start with the very first one. This is, uh, one of the first meltdown tweets that Donald Trump sent. This is also the one, uh, was fairly racist. When you read between the lines here it is, the Democrats never even mentioned the words, law and order at their national convention. That’s where they’re coming from. If I don’t win America, suburbs will be overrun with low income projects and our kissed agitators looters, and of course, friendly protesters. So here’s the thing. We know what he means when he says low income housing projects, we know that he is referring to poor black people. And he’s trying to scare these, I guess, racist, suburbanites into thinking that if you vote for Joe Biden, you’re going to have poor black people move into your neighborhood.

That’s just, what’s going to happen. Even though that that hasn’t happened. Anytime we’ve had a democratic president in the past, it’s definitely totally going to happen now. But here’s the thing that I don’t think Trump understands. Is there a lot of inherent racism in the United States? Absolutely. Does the thought of being near a poor black person terrify the average American citizen? No, it does not. And it’s not going to terrify enough of them to let you, uh, retain control of the white house as for all the other stuff, simply not going to happen. It’s happening now in Trump’s America. We’re literally seeing it on our streets. A few streets, to be honest, this is not why it’s spread by the way. We’re literally talking about a couple of cities where things have gotten out of control in Trump’s America. You’re not seeing rioters. You’re not even seeing protesters in the vast, I mean 99.9% of American cities.

Aren’t seeing anything at all, but he wants you to think that what’s happening in Portland or what had happened in Kenosha is somehow coming to the streets of Birmingham, Alabama, or Oxford, Mississippi. Y’all best be where he’s playing on the fears and ignorance of the voters down here in the South. That’s what he’s doing. Let’s see it happened all the time. And the worst part is I see a lot of the idiots down here that actually do believe it seriously. If you haven’t taken a trip through the American South, since Trump became president, I seriously suggest you do that. You know, I know there’s a lot of people who do what we do here. Uh, you know, political analysis, things like that. If y’all, haven’t actually been to this area of the country, since Trump became president, you’re kind of not getting the full picture of how bad it really, this is a different world, a world you need to experience to fully understand how people like Trump come to power because it’s sickening.

I get to watch it in real time and it’s terrifying. Uh, so anyway, okay, there’s your first meltdown of the day here is the second one. And this is actually a two part tweet cause he couldn’t get it all on one. And for a little bit of context, uh, Trump went to Michigan yesterday, did another one of his rallies where most people were not wearing masks. So most likely going to be another, uh, quote super spreader event. But here are the two tweets on November 3rd, Michigan will decide whether we will quickly return to record prosperity, or whether we allow sleepy Joe Biden to impose a $4 trillion tax hike, ban American energy, confiscate your guns, shut down the economy, shut down auto production delay the vaccine, destroy the suburbs, erase your borders and indoctrinate your children with poisonous anti-American lies.

Do you remember the day before yesterday when Donald Trump came out and said the reason he lied to us about coronavirus? Cause he didn’t want to, didn’t want to cause a panic. Mmm. Do those words seem like the words of a man who doesn’t want to cause a panic or do they seem like the words of a person who needs to be constantly monitored 24 hours a day by mental health professionals? Honestly like if you saw a guy on the corner of the street saying these exact same things, reading this tweet verbatim, you would probably call somebody because you would not feel safe. You would not feel secure. This person is clearly deranged and they need help, but it’s not a personal street corner. It is a person that needs help, but it’s the person sitting in the white house. It’s the person with the damn nuclear coat codes.

And we’re supposed to sit here and act like this is okay. I forget for a second that everything, this man just mentioned is an absolute lie. As I previously said, Democrats have actually controlled the government before and they didn’t do a single one of these things. He said there was no trillion dollar tax hike. They didn’t come door to door and confiscate your guns. They didn’t impose anti-American indoctrination on your children. This is psychotic behavior, psychotic talking points coming from a man who isn’t well, Donald Trump has lost his mind and I know people well, he never had shut up with that crap. That’s not helpful and it’s annoying, but he has gone crazy.

This, this kind of proves it. I’m I’m not saying this to mock him. And I’m not saying this because I’m, you know, inconsiderate of people with mental health issues. This man has a mental health issue. This man is a threat to the country. And we have seen that with his orders, with having Homeland security, go around and disappear off American streets. He is a threat and he needs to be contained by the professionals. I can promise you if there was somebody on a street corner saying the exact same things that Trump said in these tweets, the police would have handled it probably with bullets rather than taking this person into custody, because they would be afraid of somebody saying such crazy things. And if you don’t believe me, we actually saw it happen earlier this week. They weren’t saying these particular things, but it was a person having a mental health issue. Police decided to shoot him rather than actually try to deal with it.

This, this man can not be allowed to remain president of the United States. I know we’re in a campaign season and I know that in campaigns, people say horrible things. They say things that are clearly not true. They say things that are borderline slander and libel. So that actually raises a bigger question. Why can we not? You know, why can the candidates not Sue for slander and libel in this specific situation? What Trump just said here about what Joe Biden would do every bit of it as a lie and each one of those lies could actually cost Joe Biden, the presidency. And one of the things you have to prove with slander or libel is that it has impacted your ability to perform your job. It has impacted your future earning potential, which if you don’t become president, that’s going to impact that. So how was this not grounds for him to file a libel lawsuit against the president? You know, furthermore, and this actually what got me on this road, as I keep thinking last night, I saw an ad for Tommy Tuberville. Who’s running for the Senate seat in Alabama against Doug Jones. Tuber Ville specifically said in that ad that Doug Jones will raise your taxes. Then use that money to pay for abortions. That is word for word, what he said, Doug Jones will raise your taxes and use that money to pay for abortions. That’s not true was not even allowed it’s slander.

So when a Tommy Tavel says these horrible things about his opponent, why can he not Sue? When Donald Trump has these horrible, complete mental breakdowns on Twitter telling lies to the American public to slander his opponent? Why can he not Sue him? I think that’s something we need to look into because this has to stop. Politics is getting uglier than ever. And it’s not all because of Trump, but he did certainly act as the catalyst to make it so much worse than it was before. Part of it is because he’s simply an asshole. The other part of it is because something’s not right in his brain.