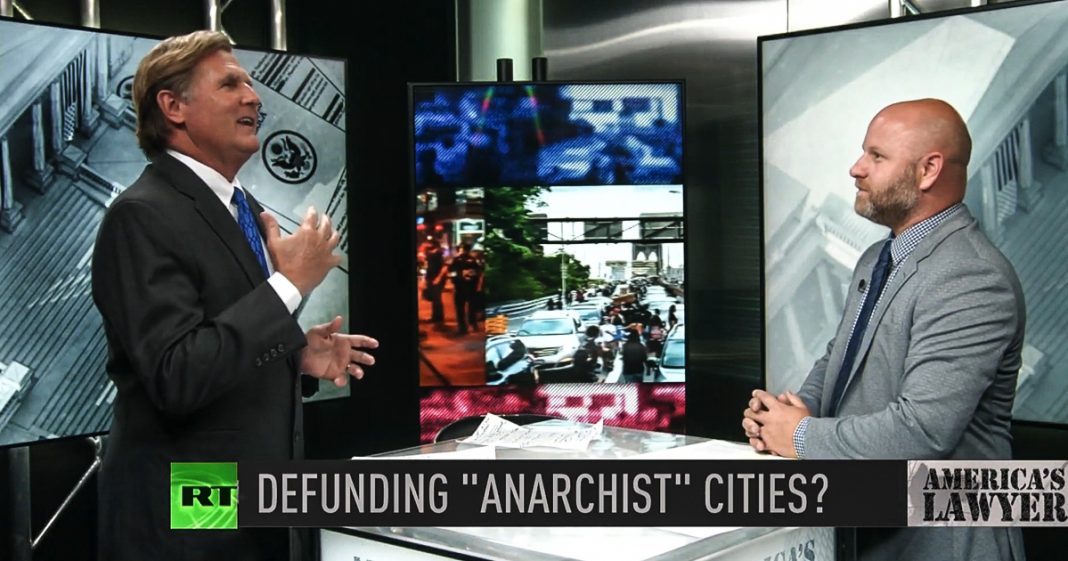 Via America’s Lawyer: President Trump ordered a review of the federal money flowing to several cities that he’s declared “lawless.” But are his actions within his authority? Mike Papantonio & Farron Cousins to discuss more.

Mike Papantonio:             Last week, president Trump ordered a review of the federal money flowing to several cities that he declared lawless. He’s hoping to choose the city that he’s going to go after and he’s going to coerce them into clamping down on protests. But are his actions within his authority? We’re going to talk about that. I have Farron Cousins here to talk about it. Farron, your reactions probably the same as mine. This is, it’s campaign.

Mike Papantonio:             It, even if he did this immediately, the appeals are going to be going on forever. So give me your take on it.

Farron Cousins:                  Right. I hundred percent agree with you. He knows, by the way, this is something technically, the act from, I think 1974, the impoundment, he can’t do this. But how many people out there in this country even know what the impoundment act of 1974 was? Exactly. They, they think, okay, wow, he is taking a stand.

Farron Cousins:                  Versus Joe Biden who, because he has no authority, really can’t do anything about what’s happening. But if Trump can give the impression that, listen, I see the riots, I, I’ve seen the, the video footage. I’ve seen the violence. I’ve walked through the demolished stores and now I am taking action. That’s how he, he calms the fears of the people.

Mike Papantonio:             Well, you know, the reason we’ve worked together so well for so many years, sometimes you’ll have an angle that’s different from mine. I’m still a believer that his attempt to use this violence to, you know, matter of fact, we’re talking before the show, I saw a headline about LA riots. You took a look. There were, there were no LA riots. But if you take a look at what he’s doing, it’s methodical, it’s got Karl Rove, his little turd blossom, it’s got his fingers all over it. And so I I’m just of the opinion it probably is going to work. You don’t think so. You think COVID is the big issue.

Farron Cousins:                  Well I, I think the latest polls we’re seeing right now, most voters do still say COVID is the number one issue they’re voting on this year. We’ve got plenty of time for that to change. And I think had it not been for COVID, this strategy 100% would have worked. It’s worked for candidates who have used it in the past. It is a fail safe, almost. You go to the fact I can keep you safe, the other guy cannot, there is a real threat. You show the video footage, even though it’s not, you know, somebody in Alabama doesn’t have to worry about what’s happening in Portland. But if you convince them they can, which isn’t hard to do, you win, but COVID has superseded that in my opinion.

Mike Papantonio:             You know, you just don’t have the ability to maintain government. You’re affecting citizens there and we’re going to do something. And even though you and I know that it’s not going to go anywhere, it sounds good. It’s sellable.

Mike Papantonio:             And the average person out there hears it and says, yeah, by golly, I want a, I want a president who’s going to do something. I noticed Biden came out today and said, you know, we’ve got some real problems with Antifa. Did you see? I mean, he, he’s really out there now. Is it a little too late? I mean, you you’ve talked about the fact that you have to form a narrative early.

Farron Cousins:                  I, I think Joe Biden just like the Democrats before him, they’re always playing behind the curve. The Republicans are really admirably fast at coming out, assessing a situation, crafting a narrative and pinning it on the Democrats. Is it always true? No, usually it isn’t, but they’re good at it. And that is a Karl Rove strategy. That is a Lee Atwater strategy. And it always makes Democrats have to play from behind. Joe Biden doesn’t know, you know, what to say, and he has to come out and say, well, no, it’s your, your, your Antifa is, is bad. I guess. I think. Who are you? And whereas Trump has already issued orders trying to deal with them.

Mike Papantonio:             Okay. Yeah. So, so I saw a couple of articles that, that, that say exactly what you’re saying. They’re saying, okay, now the Dem, the Democrats are going back to their, their, their same story, Russia, Russia, Russia, Russia. Matter of fact, I saw, you, you sent me a video. It was the most remarkable thing. It was Hillary Clinton looked like the whack job of the century. She’s in the film. Bill Clinton looks like he’s drugged, sitting behind her. Tell us about, I mean, when you sent this to me, my only reaction was go on, get another issue. It’s not working. It just isn’t working. I don’t know why they don’t, they don’t get that.

Farron Cousins:                  Right. She’s sitting there ranting about Russian election interference, which is the only time we have seen the Democrats actually care about election security.

Mike Papantonio:             Well, my point is the Democrats need to move on. They need to, they need to fix this issue. You don’t think it has the impact and I have such huge respect for your opinion. I think it does. I think the, the it’s like a water torture, you know, Biden can’t solve this problem. I can, even though he’s the sitting president, which is weird.