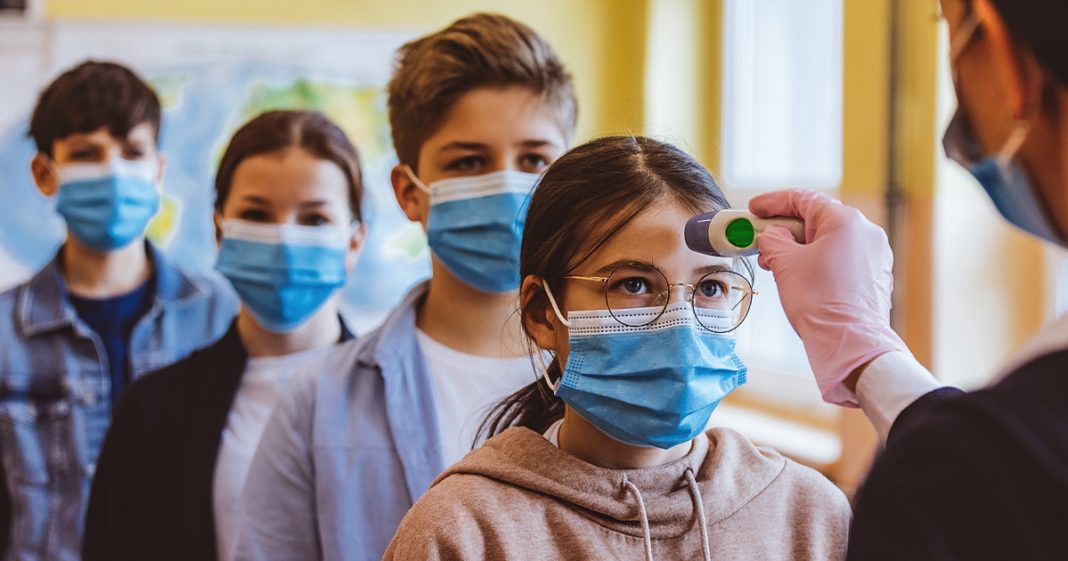 At least 6 teachers have died from COVID 19 since schools began reopening last month, and the virus isn’t showing any real signs of slowing down. These deaths were all preventable, and they show us what happens when a country decides to ignore science in the name of money. We are valuing the wrong thing, as Ring of Fire’s Farron Cousins explains.

Well, it’s been several weeks now since, uh, schools in certain areas of the country have started reopening. They’re starting to reopen in other areas of the country this week. Um, and we’re starting to see teachers dying of COVID-19. So far there have been six confirmed teacher deaths from COVID-19, um, in areas that had previously opened several weeks ago. Now a lot of the country actually waits till after labor day to reopen schools. So this week we saw huge, huge, huge reopenings across the country. Uh, in certain other areas, specifically down here in the South, uh, and a couple places in the Midwest, they had reopened several weeks before, but we have seen teachers die so far in Iowa, Mississippi, Missouri, Oklahoma, and South Carolina, six of them, nearly all of them had a comorbidity, which means they had an underlying health condition that made COVID-19 that much deadlier had they not contracted COVID-19 they would not have died from the underlying condition.

That is an important point. Uh, one of them was actually not a, they were confirmed to have not contracted it at school. They actually traveled out of state and that’s where they contracted it. So sure. Maybe that one doesn’t count, but the bottom line is you see, I, I came across the story on Twitter, Marianne Williamson tweeted it out. Um, and I started going through the comments and you see all these right wingers trying to nitpick everything being like, well, the co morbidities Moodle, that’s not COVID Oh, well, one of them was teaching from home. So that doesn’t count. This is a misleading, irrational, stupid story. Now here’s the thing, folks, even if it was only one teacher that contracted it at a school and then died from it, that’s one teacher, too many. That’s one exposure to many. What if it was your kid in that classroom? What if it was your niece or nephew or your grandchild and their teacher died of COVID wouldn’t you suddenly start to think, Oh my God is my kid safe? Is my family safe? I pick the grandkid up from school that day. I was just at my niece’s birthday party. What if she had an I’ve been exposed? Now I’ve been to work folks. That’s how these things happen. That’s how this whole thing works. That’s why the reopening of schools was a mistake.

I’ve seen firsthand what teachers are having to go through in order to stay safe. And by the way, most of them are not actually being given the supplies to do that. And I know this because my wife is an educator. She goes to school every single day. I I’ve had to buy her a lot of the equipment that she uses to stay safe. I’m constantly on the lookout for hand sanitizer and bottles of, you know, 99% rubbing alcohol to send with her to class, not just for her, but for her students and for the other teachers in that school, I’ve gone out and I’ve bought supplies for them. No disinfecting wipes. The schools are doing what they can to, to come up with these supplies to keep people safe. But it’s simply not enough when you have kids, especially in a middle school or high school, junior high setting that are coming and going from your classroom. Every single period, you know, touching the walls, touching the tables, touching the desk, touching the door, knobs everything. So every 50 minutes you have to disinfect, you have to spray, you have to wipe, you have to do this. You have to do that. You run through those supplies very quickly. You have to sanitize

And is it worth it? That’s the, Are these lives worth it because these are six confirmed. The real number is likely higher. And then when you look at situations like we have down here in Florida, um, our public health departments County by County, I’ve actually been told they’re not allowed to release any numbers publicly about the number of COVID cases in our schools. Can’t do it. We do know from other data that in the County, I live in the number of code infections among children has tripled tripled since schools reopened three weeks ago, tripled. So yeah, it’s a dumb idea. People are getting sick and people are dying and it didn’t have to be this way. Trump tweeted out earlier this week, the Democrats have to reopen the schools the sooner, the better

Barren in school. Dude, do you even know, Do you know where your son even is? Honest to God? When was the last time you had a conversation with that kid? What’s his teacher’s name? When’s his birthday. Honestly, I would like to see Joe Biden, by the way, just slip one of those zingers in there. And Trump, during the debate, I guarantee you it’s going to catch him off guard, but nevertheless, that’s neither here nor there. The fact is teachers are dying. Students are going to be dying soon, too. We will see that happen in this country. And you may think that, okay, that’s one thing, but let me tell you, when it’s you, when it’s your kid, when it’s somebody close to you, that might change your opinion on whether or not school should be open right now.