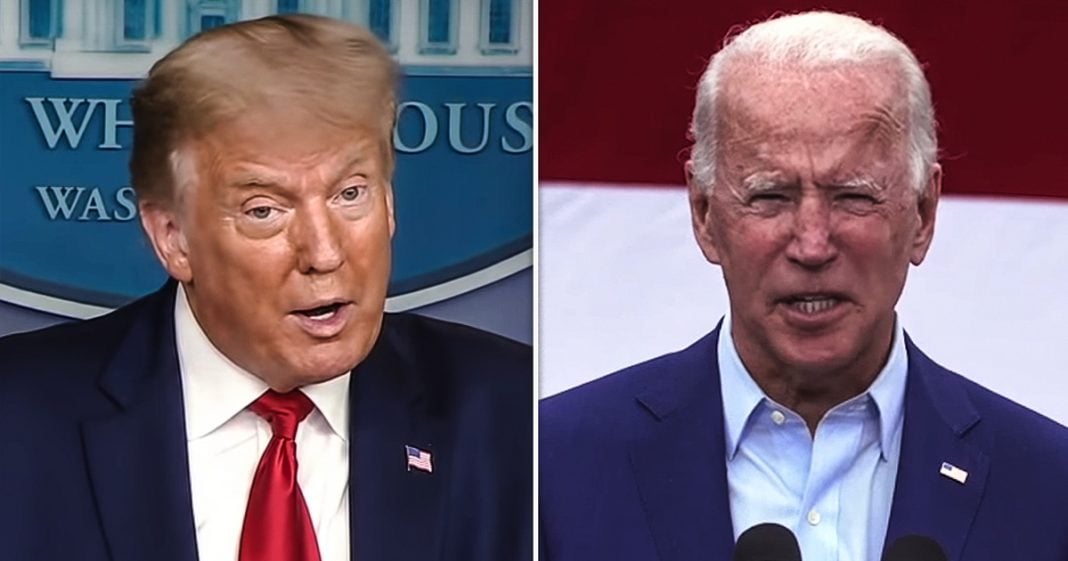 A new poll shows that a majority of voters in 6 key swing states actually view BOTH Donald Trump and Joe Biden as mentally unfit to hold the office of the Presidency. That’s what we’ve come to in this country – we have two elderly men who can barely string a coherent sentence together vying for the highest office in the land, and the voters aren’t fooled by either of them. Ring of Fire’s Farron Cousins discusses this.

According to a shocking new poll released this week by CNBC, a majority of voters in six key swing States, Arizona, Florida, Michigan, North Carolina, Pennsylvania, and Wisconsin. Majority of voters in these States say that Donald Trump is not mentally fit to be the president of the United States. At the same time, a majority of voters in these six swing States say that Joe Biden is also not mentally fit to be president of the United States. 55% say Trump is not mentally fit. 52% say Biden is not mentally fit. And the path to the white house kind of runs through all of these States. So a majority of people having to cast their ballot in these States are saying to themselves and freely admitting that yeah, neither of these guys are there enough to be the president, but I have to choose between one of these two people that I don’t think are mentally competent enough to be the present folks. Why are we in this situation to begin with these people, by the way, they’re not wrong.

Okay. Now listen, full disclosure. I have said repeatedly, I am going to vote for Joe Biden. I’m going to encourage people to vote for Joe Biden. You know, I know what’s at stake. I see what’s at stake. I see the damage Trump has done. And while I don’t agree with Biden on many, many, many things, he would not do as much damage as Donald Trump. And that’s what we’re at, right? Written mitigation. And then We pushed Biden left from there and we hope for the best, but there is no hoping for the best of Trump wins. There is no pushing to the left. If Trump wins, there’s none of that. And there’s no teach in the democratic party. A lesson didn’t work in 2016, did it? No stop thinking. You’re going to do that. Well, let’s work with what we have. And unfortunately what we have is two people that the public sees as mentally unfit to hold the off Office. That’s sad and it’s especially sad considering the kind of, uh, opportunities Let’s put it that way

We had in at least the democratic primary Republicans had no chance. They were stuck with crazy, no matter what. Um, that goes for 2016 and 2020, but for the Democrats, we had ideas. We had goals. We had plans. We were going to give people healthcare. We were going to pay off student loan debts. We were going to clean up the environment and create new jobs and, and invest in infrastructure and possibly a universal, basic income. We had big plans and great ideas. And then we ended up with the worst person out of the bunch with the exception of possibly Michael Bloomberg. Wow. And yeah, the establishment did do that because they learned nothing from 2016. You’re not going to teach those folks a lesson. So we got to work with what we’ve got and that’s going to be really hard to do considering the fact that the public sees Biden as only slightly more mentally competent than they do Donald Trump, but both of them, according to the voters in these six swing States, shouldn’t be president because their minds aren’t up to the task.