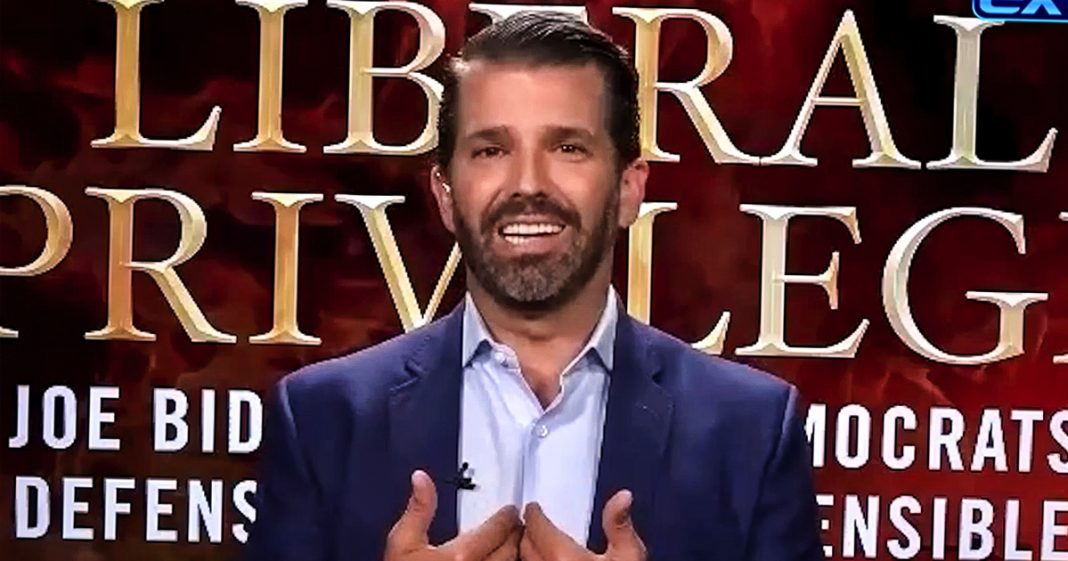 In an interview with Extra TV this week, Donald Trump, Jr. chalked up Kyle Rittenhouse’s murders in Kenosha as just “kids doing stupid things.” When pressed on that claim, Trump Junior admitted that it was “really stupid,” but he refused to say that it was outright wrong or that there was a problem that needed to be addressed. And this is what is wrong with Republicans in this country today, as Ring of Fire’s Farron Cousins explains.

Earlier this week, Donald Trump jr. Appeared on extra TV to be interviewed by a correspondent by the name of Rachel Lindsey. And during that interview, he was asked about Kyle Rittenhouse, the Kenosha killer, the 17 year old kid that traveled from Illinois to Kenosha, Wisconsin, and murdered to black lives matter protestors. This is what Donald Trump jr. Had to say about mr. Rittenhouse. He said, he’s a young kid. I don’t want 17 year olds running around the streets where they are fifteens. And maybe I wouldn’t have put myself in that situation. Who knows? We all do stupid things. It’s 17 two, which Rachel Lindsay responded. Um, I think that’s a little beyond stupid. And then Donald Trump said really stupid, fine, but we all have to let that process play out and let due process take its course. So murdering two people traveling across state lines with an illegal weapon, because you were only 17, you were not allowed to have this weapon traveling across state lines with an illegal weapon.

Killing two people is just as stupid, crazy teenagers and your antiques, Oh no, this is murder. This, this is homicide. And in fact, you could argue that this was premeditated murder. He may not have known who he was going over there to kill, but he knew he was going over there to kill. I think the prosecutors, as long as this kid doesn’t get a pardon. The prosecutors have a slam dunk case against him. There is no other way to describe this. You cannot say that it’s self defense. When you cross state lines with an illegal weapon to go to a place you don’t live and allegedly defend a store that you don’t own in a city that you don’t live in. There is no excuse for what Kyle Rittenhouse did. And the dumbest excuse you could offer is that well, that’s just boys being boys. Listen, I was a 17 year old kid wants to do you know how many times I came close to actually killing somebody a zero? Like never, never even a thought in my head. Like maybe I need to go out there and do something like this. No, no, because I’m not psychotic. Yeah. I agree that 17 year olds do stupid things. I did my share of them, but none of them ever put another human being’s life in danger.

And that’s the difference. But Donald Trump jr, just like the rest of the Republicans who were trying to make Kyle Rittenhouse into some kind of Messiah figure, they have to try to downplay what he does. They, they, they know how bad it is. They know, trust me, there isn’t any Republican out there who actually thinks that what he did was justified or good behind closed doors. When they lay down in bed at night, they know that what this kid did was wrong. But if they admit that it runs counter to the narrative that they have been pushing since Trump became president. And that is that Antifa is the violent ones. Antifa is the crazy ones, but this kid went to a black lives matter protest with a gun that he was legally prohibited from having. And he killed two people. That’s not a 17 year old being stupid. That’s not a 17 year old being really stupid. That’s a 17 year old committing murder.