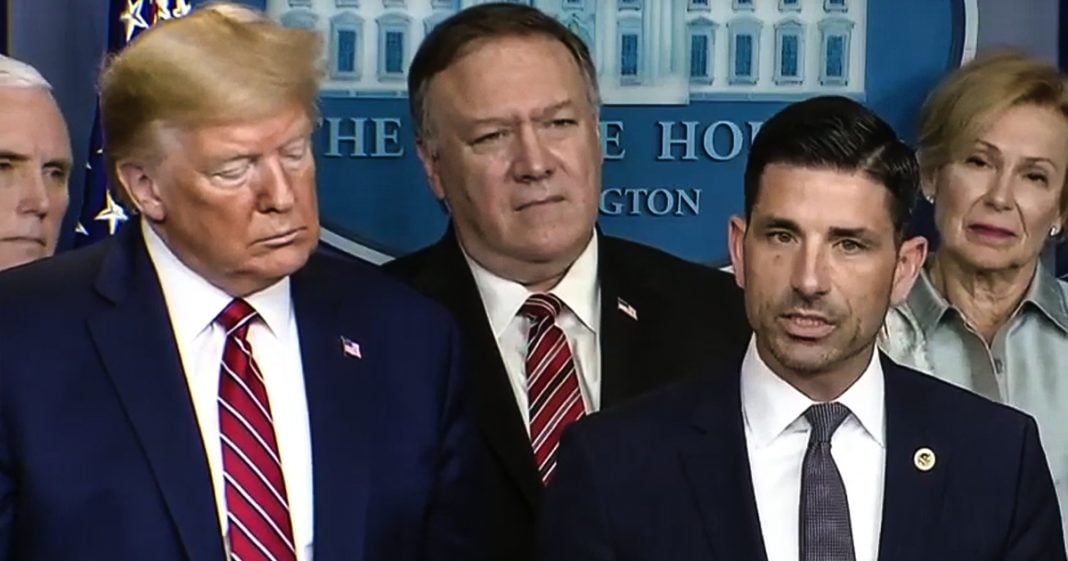 According to a new whistleblower report, the Department of Homeland Security was ordered to modify their daily intelligence briefings to Trump in order to suit his political agenda. This meant downplaying the threat of Russian interference while over-hyping Chinese and Iranian interference. The complaint also alleges that other parts of the report would be modified or outright omitted if they contradicted claims Trump had made publicly. Ring of Fire’s Farron Cousins discusses this.

So a Wednesday was a bit of a big news day, lots of different bombshells. We had the Bob Woodward book bombshell. We had the whistleblower report bombshell. And I think that to be perfectly honest is a little bit more important than what happened with the Woodward book. So let’s start today with the whistleblower report. According to this whistleblower report from the department of Homeland security acting secretary, Chad Wolf actually instructed employees at DHS earlier this year to modify their intelligence briefings, to fit with Donald Trump’s political agenda, several specific items. First and foremost, he told them to downplay the threat of Russian election interference, which I don’t care, which side of the, you know, Russia Gates you fall on. There is no denying. There, there is, uh, evidence that says that yes, Russia has. In fact, metaled with our elections. Most of it in the form of buying Facebook ads, posting memes, bots on Twitter, whatever it is, but that is still technically considered election interference.

Um, so Chad Wolf wanted staffers to downplay that to Donald Trump because Russia is helping him, but instead hype up China and Iran, uh, because China is essentially doing the same thing, Russia is except they’re doing it help Biden. So they wanted to hype up what China’s doing because China’s got to be their big, bad enemy. Uh, you know, whether it’s trade the pandemic or election interference, they’re trying to pin every single thing on China. And so that’s why Chad Wolf wanted them to always be the bad guys in the daily intelligence briefings, but not tell him that Russia was doing the same thing, except to a greater extent. Now that was just one part of it. Another specific example, given in this whistleblowers report, a whistleblower who, by the way, claims that he was retaliated against moved to a different post so that if, if factual is also illegal, uh, but mr.

Wolf also told him staffers at Homeland security to omit in their reports, the, uh, the damning evidence of how horrible and how dangerous white supremacists are in the United States. And over-hype essentially is to exaggerate the threat of Antifa, because that is what suited Donald Trump’s political agenda. That has been his political agenda all summer. When we saw these protests taking place, he’s trying to tell us that this was all Antifa they’re out there. Ashing buildings, starting fires, doing all this horrible stuff, bringing all this violence to our streets. When in reality, the department of Homeland security, and we know this from a report earlier this week, department of Homeland security, FBI and police offices across the country have all willingly admitted in their own documents. That white supremacy is in fact, the greater threat. In fact, the greatest threat to the livelihoods of American citizens, Antifa is not on that list.

Well, that talking point and the data doesn’t exactly mesh well with Donald Trump’s talking points. So they changed it. They edited it. They made it look like what the president was saying and feeling and believing was accurate. When in reality it was the exact opposite folks. I don’t know if you realize this, but the department of Homeland security, that that’s the group of people in charge of Homeland, meaning, meaning where we live security, meaning keeping us safe and they’re actively lying and distorting the data for the president of the United States. So he can go out there and sell a particular political agenda. That is what we are dealing with in the highest levels of the government today.

Chad Wolf, the acting secretary, cause he’s not even the permanent one, uh, needs to be subpoenaed immediately. And I don’t want to see any of these wishy washy, mealy mouth subpoenas from, uh, from the house. I want to see full blown in forest. We will throw you in the little tiny jail underneath Congress. If you do not comply subpoenas, that’s what I want to see. Unfortunately, that’ll never happen. We’re going to get some strong statements from some Democrats. Oh, that makes me so mad. Or you shouldn’t do that and more, and that’s it. That’s it. That’s going to be the extent of what’s going to happen to mr. Chad Wolf for what he has done. This isn’t good enough. The right is totally bonkers. And they’re fascists. They’re absolute fascists propping up a want to be dictator like Donald Trump. But unfortunately on the other side, the Democrats are damn near useless.

They’re not flexing the muscles that they have. They’re not exercising the powers that they have. So what frickin good are they? The damn country is falling apart. The government has been taken over by the fascists and we need somebody, anybody with a little bit of authority to come in and straighten this crap out. That’s why we have the checks and balances. Somebody out there does have this authority. It’s just that nobody is actually willing to use it at the moment. Maybe that’ll change course. I’ve been thinking that through a lot of stories this year. So I have very little hope that that’s actually gonna happen.