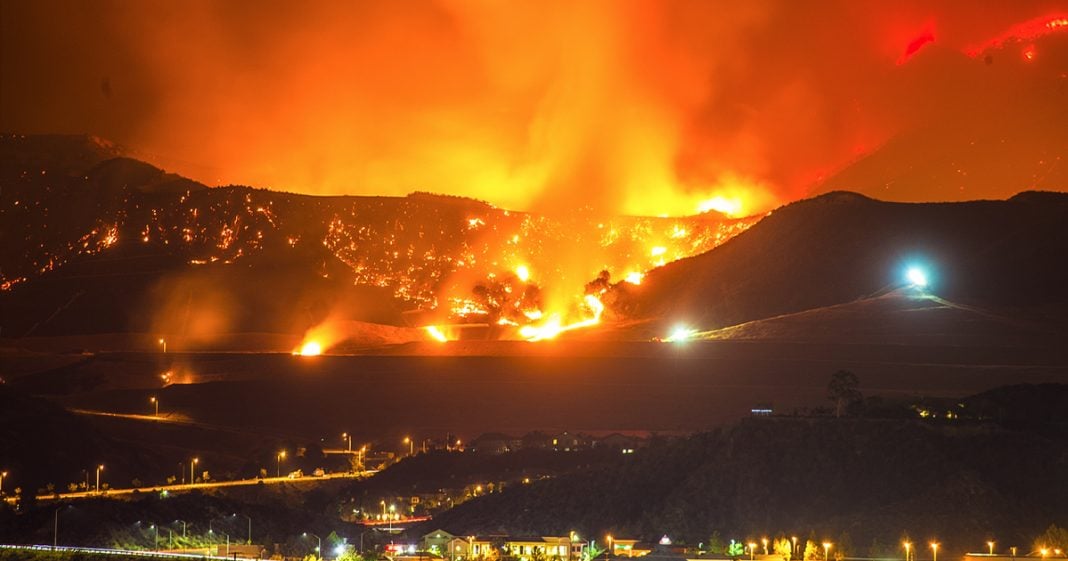 There are currently at least 87 different wildfires burning in the United States right now, with nearly all of them situated out West. The fires are so prominent that the skies in California, Washington, and Oregon (and elsewhere) began to turn orange on Wednesday in the middle of the day. This is what the new normal will look like from climate change, as Ring of Fire’s Farron Cousins explains.

Right now, there are at least 87 different wildfires burning in the United States. So far, this year 2 million acres of California for forests have burned to the ground. We are witnessing an unprecedented fire event here in the United States. That is 100% brought to you by manmade climate change. Things have gotten so apocalyptic along the West coast here in the United States, uh, California, Oregon, Washington, um, even some States further inland that yesterday. And I’m sure everybody has seen the pictures. Now that circulate on social media, the skies were orange all day, like sunset all day because of the smoke and the Ash and the flames that are engulfing large parts of the United States right now. So while half the country yesterday was distracted with the Woodward book with all kinds of other stupid stuff that Donald Trump is saying, Oh, huge portion of the country was trying to figure out where the hell they’re going to go to get away from the fires.

You know, what are we going to do? It’s coming this way. We don’t have the resources to fight it. The state doesn’t at the moment, the States do not. Um, because most States by the way, actually use prison labor to help fight the fires, but they can’t do that because of the pandemic. Um, so that’s actually one of the things that’s making things so much worse right now. You’ve got idiots with their gender reveal parties that actually started, uh, one of these massive fires. Now, the only thing we can do is hope that we can get them under control and not the rest of the fire season is a little more mild, but in the long run, we also have to do something about the issue of climate change. We cannot continue to ignore that. We’re not even whistling past the graveyard at this point, we’re whistling past our own graves.

We’re digging our own graves with it and acting like no, no, we’re not. We’re not, I’m not digging a hole. Oh, Oh God. Oh no, look, we are running out of time. It has now been two years since we got the report saying we had 12 years, we’ve done nothing. We have roughly 10 years till about 2030, you know, give or take a year or two either way to really get this under control before these effects become permanent. You know what we’re seeing happen on the West coast, in the United States right now could be the new normal, if we don’t take action. And that’s why it’s important to say things like could be. And if we don’t, because there’s time to reverse this, there is time to make this not how we just live our lives. Now we have, we have the technology, we just have to have the leaders with the fortitude to do it. That’s what we’ve been lacking. And we had it to an, to a, to a degree with Obama was not quite as aggressive as he needed to be, but was a hell of a lot better than quite literally everyone that came before him on the issue. But Trump has reversed almost all of it. We can’t afford this. The frigging skies are orange with the fire that is destroying the United States. Our country, large portions of it are quite literally burning to the ground. And we still have leaders who refuse to admit that this problem is real.