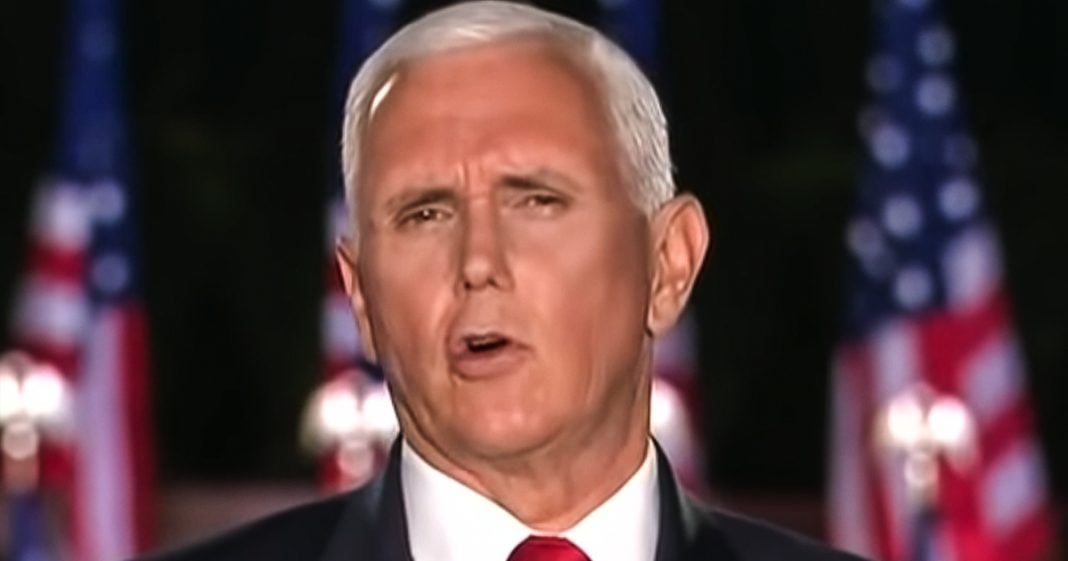 Vice President Mike Pence is headed to Montana next week to attend a fundraiser being hosted by a couple that has shared countless posts and memes from QAnon. This is a dangerous movement that has repeatedly attempted to carry out heinous crimes against Democrats, and the fact that this administration is validating them only helps the conspiracy grow. Ring of Fire’s Farron Cousins discusses this.

On Monday of next week, vice president Mike Pence is going to be traveling to Montana for a fundraiser. Now there’s nothing necessarily unusual about that. Obviously we’re an election year. Politicians go to fundraisers all the time. So why is this a big deal? Well, because this happens to be a fundraiser hosted by two Q Anon followers. And he’s also not just going to be traveling there by himself. He is going to be traveling with Donald Trump. Junior’s girlfriend, Kimberly Guilfoyle. He’s going to be traveling there with RNC chair, Ronna Romney, McDaniel, and, uh, RNC finance chairman, Todd rickets, and RNC co-chairman Tommy Hicks, jr. So the vice president of the United States, the president’s son’s girlfriend and the top three people within the actual Republican party itself are traveling to the home, um, or the venue. I’m not sure if it’s home or venue, whatever it is of Karen and Michael Borland, who are two prominent Q Anon followers here in the United States. Uh, the couple on their individual social media pages, uh, Michael Borland, by the way, actually has the Q and M logo all over his Facebook and his Twitter pages. Um, they share memes from Q Anon. They share posts from Q Anon. They are full blown Q a non honors, and they have the ear of the most powerful people within the Republican party, not Mike Pence. Uh, the, the actual Republican party itself,

Q Anon is the Republican party. Now it’s not just that they’ve mainstreamed. It it’s that they have welcomed it with open arms. They are embracing it and they are saying you have a place at the table. Welcome. Come sit down. Tell us more about this cabal of Satanists running around DC. Ooh, that sounds enticing. Not crazy at all. Right. We just want your money. We don’t care if you’re bringing all of this psychosis with you, because that is what this is folks. I know there’s plenty of people on social media who are quick to jump and say, no, you can’t call them crazy. You can’t say that they have a mental illness, but folks that, that that’s, that’s what this is. This isn’t meant to be an insult. This isn’t meant to denigrate people with mental illnesses. These are honest to God, people that do need help if you’re sitting there in your home.

And you honestly think that there is a cabal of pedophiles and Satanists and deep state, uh, operatives working in DC behind the scenes in unison, just for the sole purpose of taking down Donald Trump. If you believe that, then you need to speak with mental health professionals immediately because that’s not a normal thought. That is a dangerous thought. And we have seen what these people are capable of. And they’re Republicans are just fine with it. Earlier this year, a Q Anon follower was arrested on her way to attempt to go murder. Joe Biden, the guy that shot up the comet ping pong pizzeria, thank God nobody was killed in that, but he didn’t care if they were, that was the plan. That was the goal. So you can’t tell me that this was just a harmless conspiracy theory or that we shouldn’t say that these people are mentally ill when they clearly are. We have to get these people help. They have been programmed into this cult and they have to be deprogrammed. There are people that actually specialize in that because it is a form of psychosis, but it’s a form of psychosis that the Republican party openly accepts openly embraces and says, not only do you have a seat at the table, but we’re going to give you the best seat in the house.