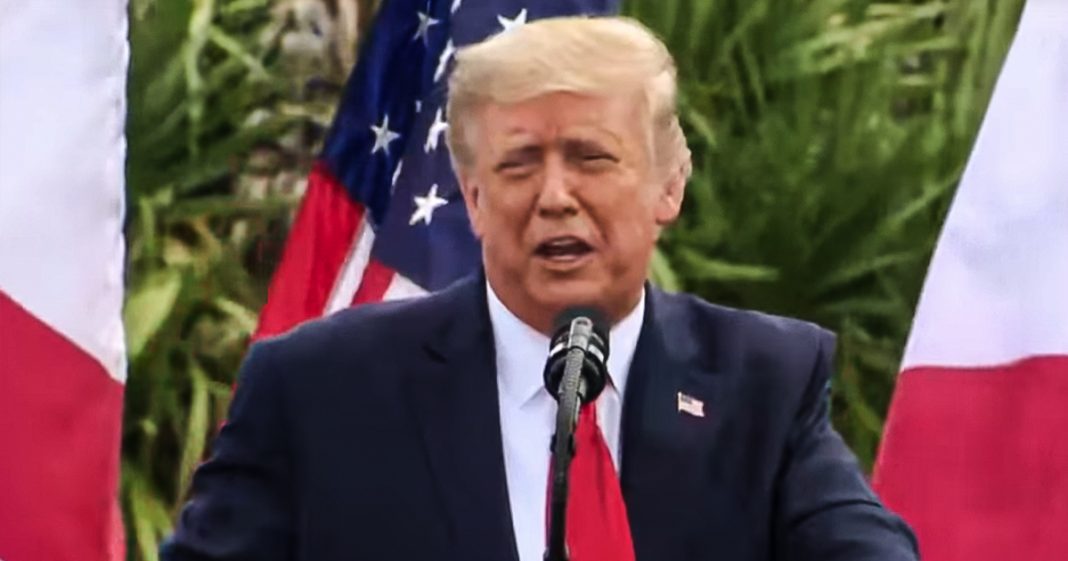 Donald Trump vowed on Tuesday to spend as much of his own money as he has to in order to retain his position as President of the United States. This came on the heels of reports that his campaign had blown through nearly one billion dollars so far this year and that they were just about out of money. Ring of Fire’s Farron Cousins explains what Trump’s promise to bankrupt himself is really all about.

Yesterday, Donald Trump made the claim that if we need any more money, meaning his campaign, he will put it up personally. And he is willing to put up as much of his own personal money as it takes to beat Joe Biden in November. Now, the reason Donald Trump is now making this statement is because one reports have been coming out for the last 48 hours telling us how broke his campaign really is. I mean, after all these people have spent nearly a billion dollars just this year and they got nothing to show for it. So you’ve been spending over $800 million over the last nine months raising a ton of money, but, but spending it as fast as it’s coming in and you’re still not beaten Joe Biden. I mean, this was the easily, most beatable Democrat we had running who somehow, well, not somehow because of all the establishment getting behind him after, uh, right before super Tuesday.

Uh, yeah, he became the nominee still the weakest of the bunch, but you can’t beat him after spending more than $800 million. So Trump goes out there knowing that the money is slowing down because that’s the real problem. The problem is not just that they’ve spent so much without anything to show for it. The problem is that the donors kind of tapped out. I in his campaign has raised $1.1 billion just this year and they have less cash on hand. The Joe Biden raised in just the month of August. Yeah, that’s tough. That’s tough to be able to go back to a Sheldon Adelson or whichever Koch brother is still alive and say to them, Hey, can you write another check please? And after all, not to mention, we had a report last month that Donald Trump got into a shouting match, I believe as was with Sheldon Adelson, excuse me.

Um, because he believed that Adelson was not giving him enough money and then the other Republicans had to come and like smooth that over. So Adelson would keep giving money. Uh, but it’s a, it’s a crap show to put it very mildly. It is a crap show. What is happening with the Trump campaign and what is happening with the Republican donors? So Trump is trying to ease their fears. He is trying to say, listen, I’m willing to put up my own money as well. If, if it, if somebody is going to lose money, I’ll be the one to lose it. So don’t worry if I’m willing to do that, you should be willing to give me money too, because you know, I don’t want to lose my money. So if I’m putting in my money, it means, dang it, I’m going to win. And that’s what he’s tried to convince these donors.

It’s kind of like, um, I think the best way to explain this, a bad investment deal, because that’s what political contributions are. They’re an investment and you’re hoping that your person wins your investment so that it pays off for you later. So he’s tried to say, listen, I’m going to invest my own money into this, into this project. And I wouldn’t invest my money into something that that’s going to fail. So if I’m willing to do it, you should be willing to put yours in too. That’s what he’s trying to do. He is trying to convince them that he wouldn’t risk his own money on a project like this, but the project has him and the projects not doing so well. He has been trailing in the polls for over a year now and sure back could change. They’re shifting a bit, but they’re not shifting enough forum. And we could still see a major blowout for Joe Biden in November. We could see Trump pull it out in November, who knows, but at this point, the wealthy Republican donors out there, the ones who do write those big checks, they’ve written a hell of a lot of checks this year. And they’re a little skeptical and rightfully so of handing him another one after he’s blown nearly a billion dollars.