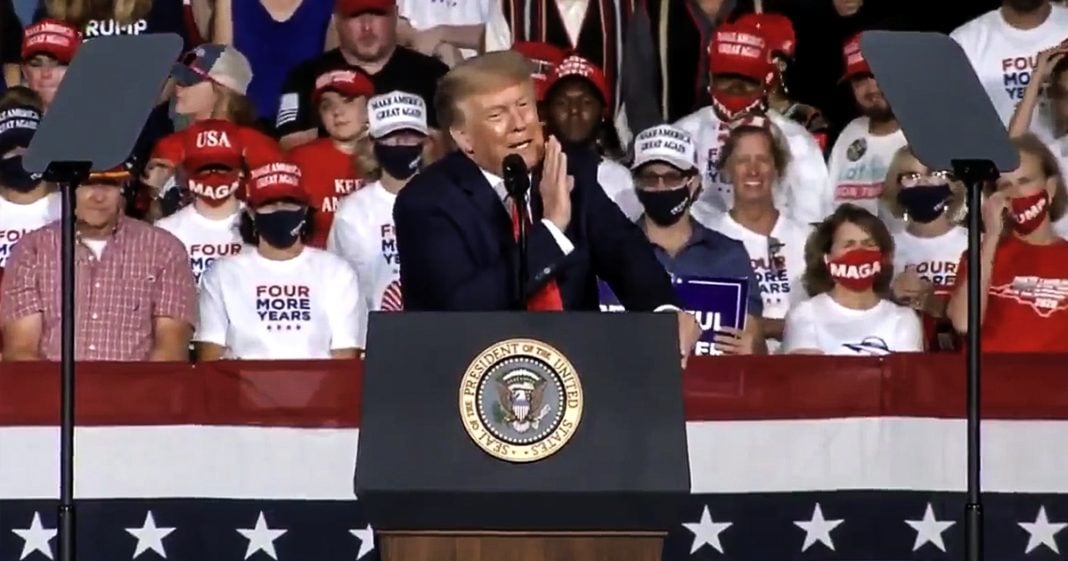 Donald Trump traveled to North Carolina for a rally yesterday, and based on what he told the crowd, he wasn’t happy to be there. Trump told the mostly-unmasked crowd that if he were sailing to a smooth election he wouldn’t have stepped foot in North Carolina. This actually wasn’t an insult to the people in the audience – it was a psychological trick to con them into voting for him. Ring of Fire’s Farron Cousins explains what’s happening.

Yesterday, Donald Trump traveled to North Carolina to give one of his infamous rallies. And, and during the rally things got a little weird. Uh, at one point he actually told the people in the crowd that if he wasn’t getting beaten so badly by Joe Biden, he wouldn’t have even bothered to come to their state. Uh, take a look here, here’s that little clip.

Donald Trump: I gotta tell you, I was sailing to an easy election. This was going to be so easy, I probably would have not been here tonight. I would’ve said, no, we don’t have to bother.

Now, what’s really interesting about what he said there is that it wasn’t actually an attack on North Carolina. At least it wasn’t meant to be an attack on those people. He wasn’t trying to say like, look, I wouldn’t be hanging out with you. I wouldn’t get my butt kicked. What he was doing was actually a psychological trick. He was trying to convince the people that they somehow had exclusivity. It’s actually something used in marketing, uh, quite frequently, you know, limited time only, you know, only under these circumstances. Can you get this particular product except the product Trump is selling is himself. And he’s trying to tell the people that, Hey, look, otherwise you wouldn’t have had this opportunity. I wouldn’t have been here, but I decided to do it. And I came to you, your, the special ones, your, the chosen ones, like if I didn’t have to, I wouldn’t, but I did. And so now we all get to be together. The man honestly thinks he’s trying to sell a, some kind of limited edition soda to these people. And unfortunately, a lot of the people in that crowd buy it. Now, he also made the comment that, you know, we classify our rallies as quote, peaceful protests so that they can get around mask requirements and get around a, you know, large group gathering and requirements because in the state of North Carolina, they still have the limit.

You know, you can’t have more than five people gathered in a public place, but they add a lot more than five. And I guess it’s because as Trump admitted, they classify it as a peaceful protest. Now I know in the clip too, you saw the people behind him. Most of them were wearing masks. A lot of them looked like they were being gagged by the manga, a symbol, but most of the people in the actual crowd itself were not wearing masks. Uh, when you look at photos and videos that actually show the other people, no masks. So we’re probably looking at another situation like the Sturgis motorcycle rally, where this Donald Trump rally ends up becoming a super spreader event because they weren’t wearing masks because somehow according to these maggots, that is an attack on their personal freedom. You know, we, we we’ve gone over that to, we were blue in the face here, but that’s what we’re looking at here.

But I think the big takeaway is the, that Donald Trump knows that he’s up against a wall. He knows that he’s out of money. So the only thing they can do, that’s quick and cheap and easy is go to these cities, hold these rallies a hope that most of the people who attend don’t end up dying of COVID-19 before the election. And then, you know, maybe if they have money later on, they’ll pay their bills that they owe to the city. Uh, most of the times they don’t, uh, they still got bills from 2018 that they haven’t paid. Uh, the state of Texas is still reeling from a lot of those that they just simply don’t pay because they don’t feel like it. So, you know, this is a cheap option for Donald Trump. He doesn’t have money to run TV ads. He’s pulled them all out of the state of Arizona. And so, yeah, you can go to North Carolina, just tell him, Hey, we’re going to pay you for that. Don’t worry about it and then never do it, but he’s in trouble. And he knows it. And that desperation came off very clearly during his little sales pitch on Tuesday afternoon.