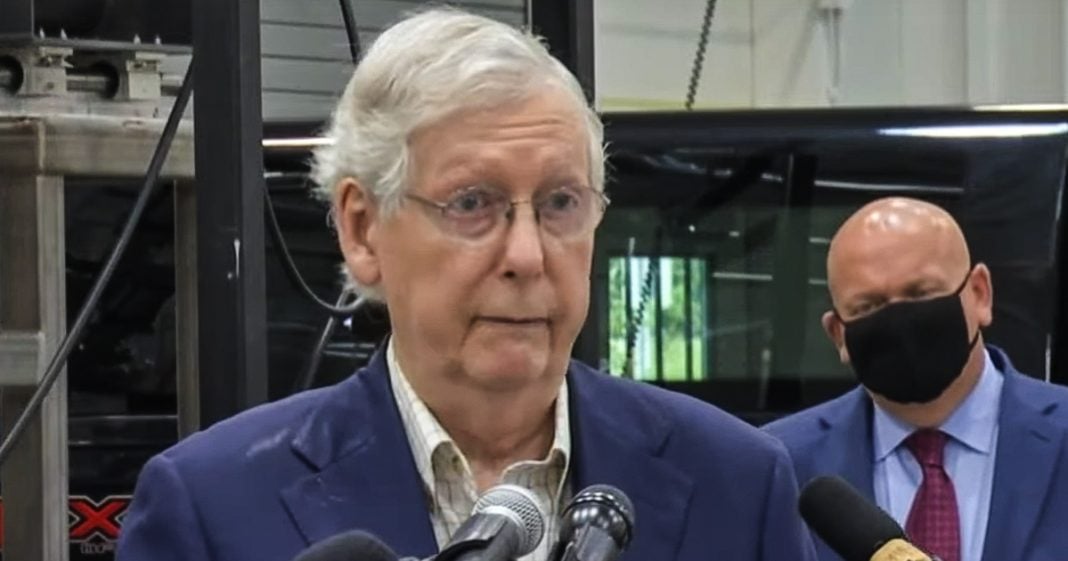 The Senate was back in session on Tuesday for the first time in weeks, and the Republicans who control the chamber wasted no time in putting forth a Covid “relief” bill that does absolutely nothing for the working class of this country who are suffering under the bleak economic conditions we are currently experiencing. This “skinny” package that Republicans are proposing includes no new cash payments and no eviction protection for people who can’t pay their rent. Ring of Fire’s Farron Cousins explains what’s happening.

So yesterday after an undeserved, several weeks of vacation time, uh, the Senate finally reconvened then of course, the first order of business was a new COVID-19 relief package for American citizens. And as expected, the Republican controlled Senate put together a, a what they’re calling a skinny package. That includes absolutely no relief whatsoever for American workers. The whole point of it was supposed to be, Hey, we’re facing an eviction crisis. We have a massive unemployment crisis. We’ve got an overall economic crisis for the people who are supposed to be working, but still can’t. They need help. And Mitch McConnell and his Republican buddies come back to the Senate and they say, no. Instead, what we’re going to do is we’re going to put together this little skinny package that does not include the direct stimulus cash payments that both the Democrats and Donald Trump’s support. So literally the only people holding that up are Republicans in the Senate.

Um, it doesn’t include any kind of eviction moratorium. So if you can’t pay your rent, you’re still at risk of losing your home and becoming homeless, uh, does not include any funding for States and cities. So they can’t deal with unemployment crisis crises and things like that. Um, it does, however include lots of cash payments. Um, two industry led the coal industry is going to get a lot of cash from this skinny package that Republicans have put together. Um, don’t know why. I don’t know why that’s a thing, but, uh, it is that’s in that legislation. Mitch McConnell had weeks. He had weeks to come up with something, anything during an election year in which we have a pandemic and an economic recession, and we’ve already done direct cash payments to American citizens. It’s not like that is unprecedented. At this point, he had weeks to sit at home and think about what the hell to do when he came back and said, let’s buy all out choroid.

This, this is insane. This is insane. Folks. Mitch McConnell is the biggest jackass sitting in Washington D C today. And yeah, I know who else is sitting in DC. And I still say Mitch McConnell is worse. Mitch McConnell has outright disdain and hatred for the working class here in the United States. And he puts it on full display every single day. At the very least Donald Trump is able to occasionally hide it. You know, he only says these things behind closed doors and we occasionally get the reports to them, trickling out, Mitch McConnell, straight up, puts it in his legislation saying, I’m not going to help you. I’m not going to give you a dime. But what I am going to do is I’m going to bail out the frigging coal industry because that’s important during a pandemic as if more coal is somehow going to stop the virus. No Mitch McConnell doesn’t give a damn about anybody other than Mitch McConnell. He would gladly watch half this country die, then have to reach out a helping hand and what he did yesterday on his first day back after a couple of weeks of vacation is proof of that.