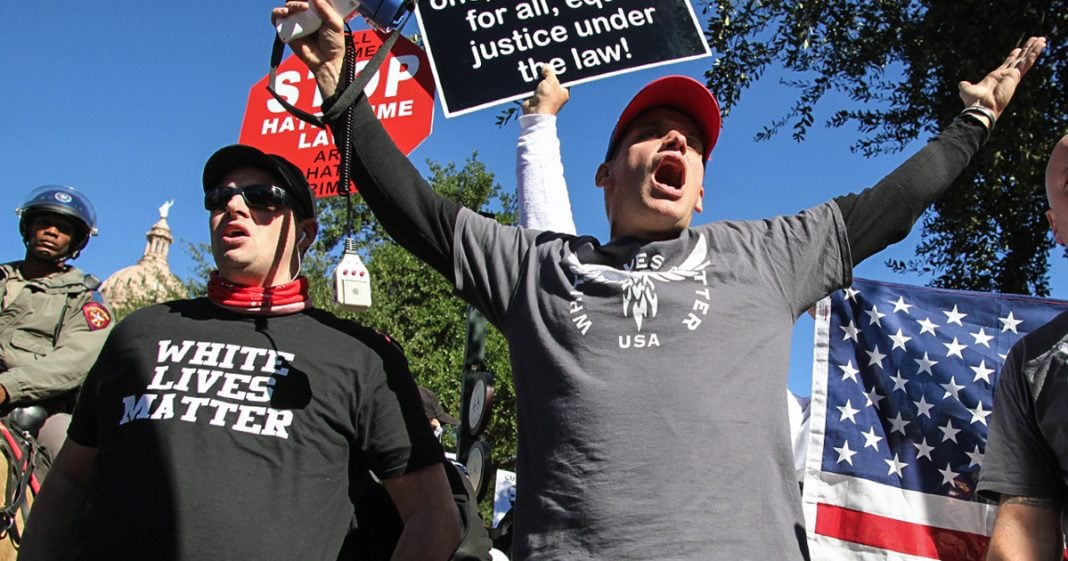 Republicans have been telling us for decades that we need to be afraid. But the one group that they’ve never told us to be fearful of is white supremacists. And now a new report from the Department of Homeland Security has labeled this group of extremists as the “most lethal” threat to American citizens. Meaning that out of all the dangerous “groups” out there, you’re more likely to be killed by a white supremacist than any of the others. Ring of Fire’s Farron Cousins discusses this.

Donald Trump and all of his Republican allies are trying to make the 20, 20 presidential election about the threats that Americans are facing, except they’re not actually making it about the real threats that Americans are facing. You know, like, uh, election interference, economic instability, job losses of bleak job market. No, no, no. They’re trying to make it about the threat of a Antifa. You know, that big mythical creature that Republicans just live in constant fear of, uh, they believe, or at least they want you to believe that Antifa is going to come down your street. Marching takeover. As Matt Gates said at the Republican convention, Joe, Biden’s gonna let ms 13 literally move next door to you. So they want you to be afraid of everything. Be afraid of the left. Be afraid of ms. 13, be afraid and vote for Republicans. Well, according to a draft copy of a department of Homeland security report, there are very real lethal threats that American citizens face on a regular basis.

Unfortunately, it’s not Russian misinformation as the establishment Democrats want you to think. It’s not MS13 or Antifa as Republicans want you to think the number one persistent lethal threat to American citizens. And I say that that way, because that’s how they phrased it. Persistent lethal threat to American citizens is white supremacists white supremacists here in the United States. According to the department of Homeland security are the number one greatest threat to your very existence. Meaning out of all the other groups in this country, out of all of the foreign groups, including those foreign terrorist groups, you’re still far more likely to be killed by a home grown white supremacist than a anyone else. This is not the first report in recent years that has said this either. This is consistent as they put it. This is persistent.

Then white supremacists pose such a massive threat to our very way of life here in the United States. And they will continue to do so. According to this report, uh, throughout at least the early part of 2021, if not further down the road. But what’s interesting is the fact that there are a greater threat to us than all of the other groups that Republicans have been telling us to be afraid of for over 20 years. You know, look back at 2004, the election, um, 2004 Bush versus Kerry. We had the Bush administration, the Republicans, the Fox News’s and the rest of the most telling us that if we vote for John Kerry, Al-Qaida is going to come over here. I’ll kite is going to view us as weak. They’re going to, uh, attack us cause they know John Kerry and the liberals they’re too soft. They’re not going to do what he thinks. So we will be at the mercy of Al-Qaida. If John Kerry wins 2008, same thing, John McCain out there saying Barack Obama was soft. He was weak. We’re going to be at the mercy of these foreign terrorists, 2012 similar situation, except then it started to evolve. An ISIS 2016 was all about ISIS and immigrants. Trump decided to throw that in 2018 was all about the fear of immigrants. And now 2020 is all about the fear of the riots and the protests taking place in less than a half dozen American cities.