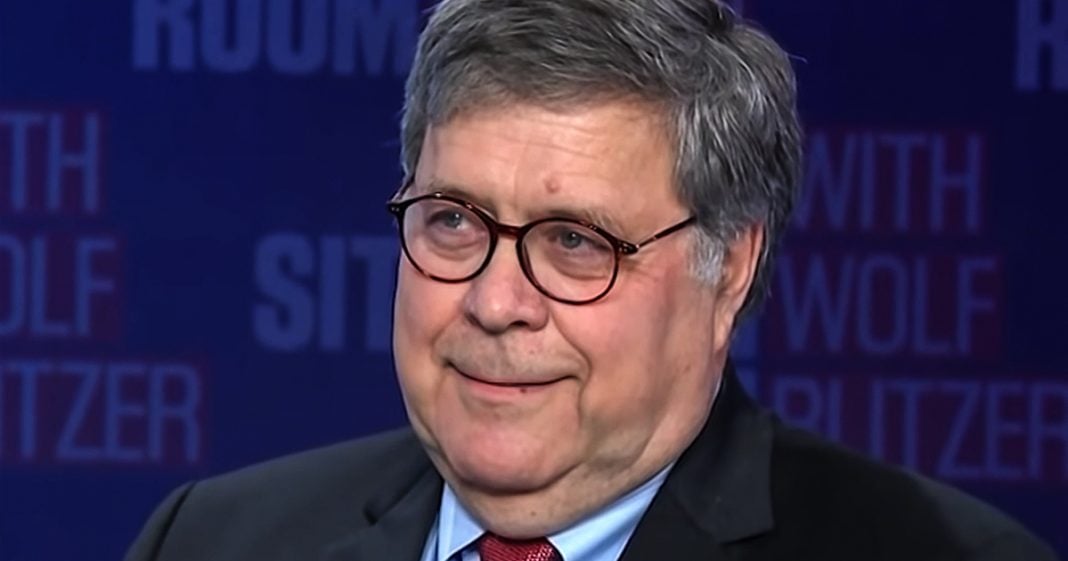 Attorney General William Barr has officially turned the United States Department of Justice into Donald Trump’s personal law firm as he attempts to take over a defamation suit against the President by a woman who accused him of sexual assault. The woman, E. Jean Carroll, accused Trump in explicit detail of raping her in a department store changing room in the 1990’s, prompting Trump to question her credibility and call her a liar. The resulting defamation suit is now being handled by the DOJ, giving Trump access to the most powerful law enforcement agency in the country. Ring of Fire’s Farron Cousins explains what’s happening.

The United States department of justice under the leadership of attorney general, William Barr has officially completed its transition from being the top law enforcement agency in the country to being Donald Trump’s personal law firm yesterday, it was announced that attorney general William Barr is actually seeking to take over the defamation lawsuit. The defense of the defamation lawsuit brought against Donald Trump by a woman by the name of E Jean Carol, who is we all remember? Not that long ago, came out with the, uh, very graphic, uh, story about how Donald Trump allegedly raped her in an apartment store, fitting room in the 1990s. And shortly after that story came out, Donald Trump called the woman a liar, uh, questioned her credibility publicly. These attacks from the president of the United States caused ms. Carroll, uh, to, as she says, lose her job and have trouble finding gainful employment. And that is exactly the kind of thing that needs to happen in order for you to be able to file a defamation lawsuit against somebody.

And so she did, and not that long ago, in case you’re not paying attention to what’s happening in the courts, uh, Donald Trump’s lawyers went to court and tried to argue that, Hey, we’re a little stretched thin we can’t fight this defamation suit right now. So could you please delay it while we fight the other defamation lawsuit brought by a former apprentice contestant summer Zervos? Uh, the judge said, no, I don’t care. May you know, you’re gonna, you’re gonna fight this. This case is not going to be delayed. We’re moving forward with the process. And the real reason they wanted it delayed is because as part of the defamation suit, EGA, Carol has to have access to Donald Trump’s DNA. Cause see, she still has the outfit that she was wearing when the alleged assault took place. And it has DNA from the assaulter. So if they’re able to match Donald Trump’s DNA to the DNA on her outfit, that proves her right.

And that proves he did. In fact defame her. That’s kind of what the whole case hinges upon. Now, the statute of limitations has expired. She cannot have him charged with rape, but if you can prove in a defamation suit that you did rape her, that opens the door to other possibilities. Unfortunately none of them are actually criminal prosecution, but it would also confirm what she is telling us about the president of the United States. And that is why the justice department, William Barr wants to take this over because they understand the ramifications of this. They understand what’s at stake for the president and for people like bill BARR himself. Because as soon as Trump leaves that white house bill BARR goes with him, nobody’s going to want that man to stick around in their administration. Unless of course Trump’s replaced by a different Trump. He has no credibility to speak of.

He is a loyal lapdog, not even one of those cute lapdogs either not even one of the ones that’s so ugly. It’s cute either. This is like some kind of disease, the mangy dog, that growls at everybody and hates them. But you know that one person to do what they want them to do. And the second they turn their back, they’ll probably bite them and give them rabies if they could. But that’s what we have in the DOJ right now. That is what William Barr is a dirty mangy rabid animal that wants to throw justice out the window. In order to please Donald Trump, this move by the DOJ is unprecedented. This is not something that we see happen in the United States ever. But William bars out there tried to argue publicly that Donald Trump was acting as president when he defamed her. And that’s why the DOJ should be in charge of the case because you didn’t get defamed by just anybody.

You were slandered by the president of the United States. Therefore it’s my jurisdiction. William Barr says they control. I mean, it’s not an overstatement to say that this agency essentially controls the law in this country. If they want something to go a certain way, there’s a good chance. It’s going to go that way. And this, this suit had the most potential to expose what kind of horrible human being Donald Trump was. After all the DOJ could have taken over the summer Zervos case. He was president when he defamed her, but they didn’t they up this one because of the DNA issue, because this one has the most intentional to expose the horrible truth about what Donald Trump has done to women.