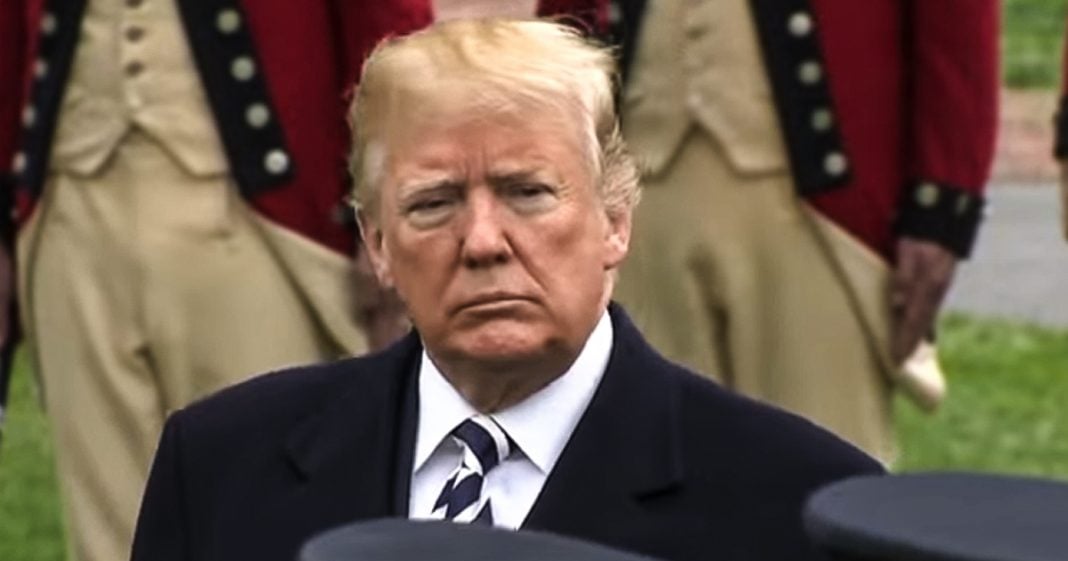 Donald Trump’s trip to France in 2018 was apparently one of the most bizarre events of this administration. In addition to his horrid comments about fallen soldiers and his fear of the rain, he also ended up taking a bunch of artwork out of the U.S. ambassador’s home in France because he liked it. Most of it was actually either a fake or a reproduction, but this story perfectly encapsulates how Trump and the rest of the 1% view the world around them. Ring of Fire’s Farron Cousins discusses this.

By now, I’m sure we all know the story from the Atlantic talking about Donald Trump’s trip to France in 2018, uh, where he made the horrible comments about fallen U S soldiers. And there’s a little bit of a weirder part, uh, of this story as well. And this is one that by the way, actually was confirmed by the white house. And it is that Donald Trump took it. Took us a nice word for it. Donald Trump’s stole art and a little figuring sculptures from the ambassador’s house from the U S ambassador’s house in Paris, took them back to the white house to be put on display for visitors as kind of, I guess, part of Donald Trump’s private collection of art that he doesn’t actually own. Uh, so here’s what happened according to the story, Donald Trump, after he canceled his trip to the cemetery, cause he didn’t want to get his hair messed up.

He had some time to kill. So he went to the ambassador’s house, just check things out. He was overwhelmed by the art there. He loved it, fell in love with it immediately. So the next day he sent his staffers over to the house and yes it is the U S ambassador’s house. Whoever’s the ambassador gets to live in the house, uh, but still it’s the dude’s house. So Trump sends a staff over and he says, get me the Franklin bust. Give me the portrait of Franklin and get me the, a Greek mythology, figurines, the little figure sculptures. Uh, I want all of them, those cause it’s, you know, I know the U S government paid for these things. So technically they’re all mine, uh, go load them into air force one, which they did bring it back to the United States. I put them out there in the white house.

The little figurine set of Greek sculptures are actually in the oval office. So that’s not even for display for people. This for Trump himself. He loves these little Greek figures. Um, everything you took as a, a fake or a replica though, the little Greek figurines have been described by, uh, uh, art. Um, I, I, I lose the word at the moment, but, but people are the art world, appraisers, excuse me. There we go. Art appraisers have said they’re fake. They were designed to look as if they came from the 16th century, but in reality, they were actually carved in the 20th century. They’re fake. They’re cool. Yeah, they’re great. They’re, they’re very nice art, but they’re fake because they were trying to be passed off as something that was centuries old instead of something that somebody just carved a few decades ago and Trump got, got bamboozled a little bit by it. He got swindled, but obviously this is just the ambassador’s house. And yet it has to look good because they do host people there. You’re not going to spend millions of dollars on this kind of art there. That’s why it was there because it wasn’t real, but it looked nice.

And that is what Donald Trump has turned. The white house into is not real anymore, but Hey, it looks nice, but it also tells you everything you need to know about not just Donald Trump, but about the rich and powerful in the United States. They see something they want, they feel entitled to it. They just take it. That is what they do. That is what they are now. They like it. They take it. It’s theirs. They’re entitled to it. They think Donald Trump may be the president of the United States, but that was not his artwork to take. There’s a reason it was in that ambassador’s house. And it was to showcase United States, exceptionalism, United States artistry. And to just kind of give off an air of being well to do. But Trump said, I want that air. I want people to know that I’m well off instead of our country’s well off and he stole it, had it loaded on his airplane, flew it back to the United States and said, well, this is our art. Anyway, we’ll put it out for everybody to see it, except it’s not anywhere everybody could see it. If you wanted it to be somewhere where everybody could see it, it would be sitting in a museum. It would be traveling from museums, uh, to museums all over the country on a little tour. But it’s in your house now instead of the other person’s house, you stole it. And ironically, you got swindled in the process too, because it’s all fake. Just like you.