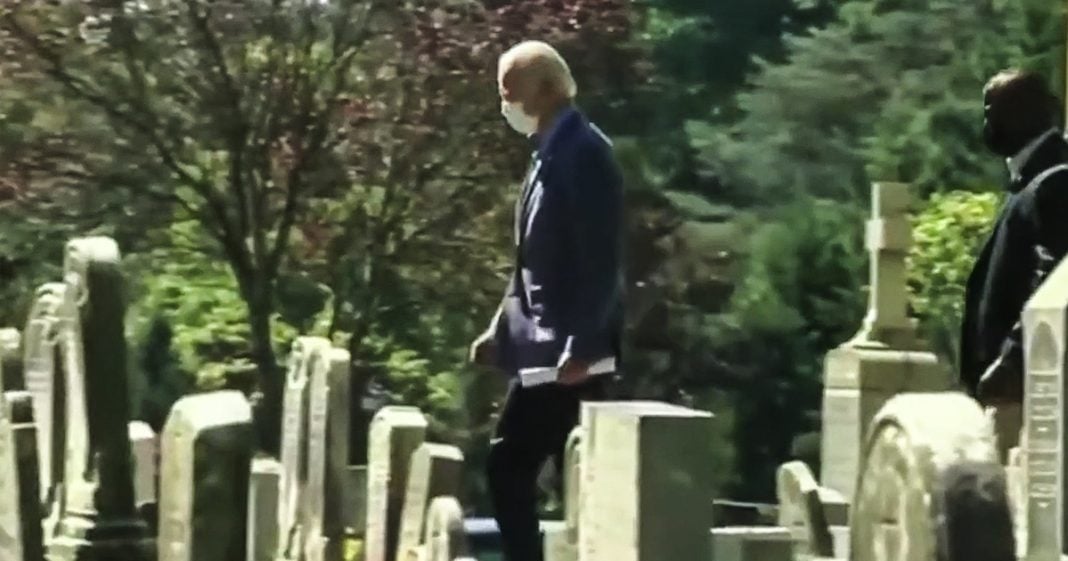 A Trump campaign staffer has come under fire after mocking Joe Biden as he visited a cemetery on Sunday. The staffer said that Biden ignored the press and was “meandering about” when the former Vice President was actually visiting the graves of his son, his first wife, and his daughter who are all buried in the cemetery. Ring of Fire’s Farron Cousins talks about the disgusting behavior of the Trump campaign.

On Sunday while Donald Trump was out golfing, uh, Joe Biden was at Brandywine cemetery in Wilmington, Delaware. Uh, apparently according to the Trump campaign Biden was there not answering questions from the reporters who were trying to get him to talk. And instead, according to one Trump staffer, man, by the name of Francis Brennan Biden was just meandering through this cemetery. Totally ignoring the press’s questions. Do you know why Joe Biden was at that Brandywine cemetery? That’s where a son is buried and his first wife and his daughter, actually three members of Biden’s family, three people that Joe Biden has loved that left this world a little too soon. His wife and daughter dying in a car accident in the 1970s, his son, uh, dying from cancer in 2015, all buried there in the same cemetery. And Joe Biden happened to be there on Sunday, paying his respects to his late family members. Trump was golfing. I know I pointed that out, but I want to point it out again. And his staffer was mocking Joe Biden as allegedly meandering through a cemetery and ignoring the press.

This is the culture of this campaign. This isn’t something we would have ever seen in the past. And I know I’ve been covering things like this for over 16 years now, we would never have seen something like this ever. It wouldn’t have mattered if they were in a cemetery visiting, you know, fallen family members or just in a cemetery in general, that would have been considered off limits that would have been considered essentially hallowed ground, where it doesn’t matter what they’re doing in there, unless they’re exposing themselves, you don’t touch it. And here we have Francis frickin Brennan from the Trump campaign and Francis Brennan is a campaign director of strategic response, mocking Joe Biden for being in that cemetery, visiting his deceased family members. And what I’m going to say might seem a little harsh, but I want everybody to understand that. I mean, every word I’m about to say from the bottom of my heart, I hope Francis Brennan loses his job. I hope Francis Brennan never gets a job again for the rest of his life. And I hope he lives a very long and very healthy life. Completely. Unhireable miserable,

Unable to fulfill any dream that he has. That’s what I wish. That’s what I hope for mr. Brennan, because I’m not going to be nice to these assholes anymore. I’m not going to turn the other cheek. I’m not going to try to take the high ground. Francis Brennan is a frigging asshole and he deserves scorn and derision every waking second for the rest of his miserable existence because Francis Brennan represents everything that is wrong with American politics today. Again, five years ago, this wouldn’t have been, this wouldn’t have been touchable. This wouldn’t have been anything anybody ever would have said a God damn thing about until assholes like Francis Brennan hijacked our political system and took it from gross to disgusting. And yeah, there is a world of difference. It was bad the way it was, it is horrible now because it’s filled with Francis Brennan’s and Donald Trump’s and they represent everything wrong with our political system today. And I wish nothing but failure for people like that for the rest of their lives. And I don’t feel bad for saying that either because I guarantee you Francis Brennan doesn’t feel bad for what he said about Joe Biden.