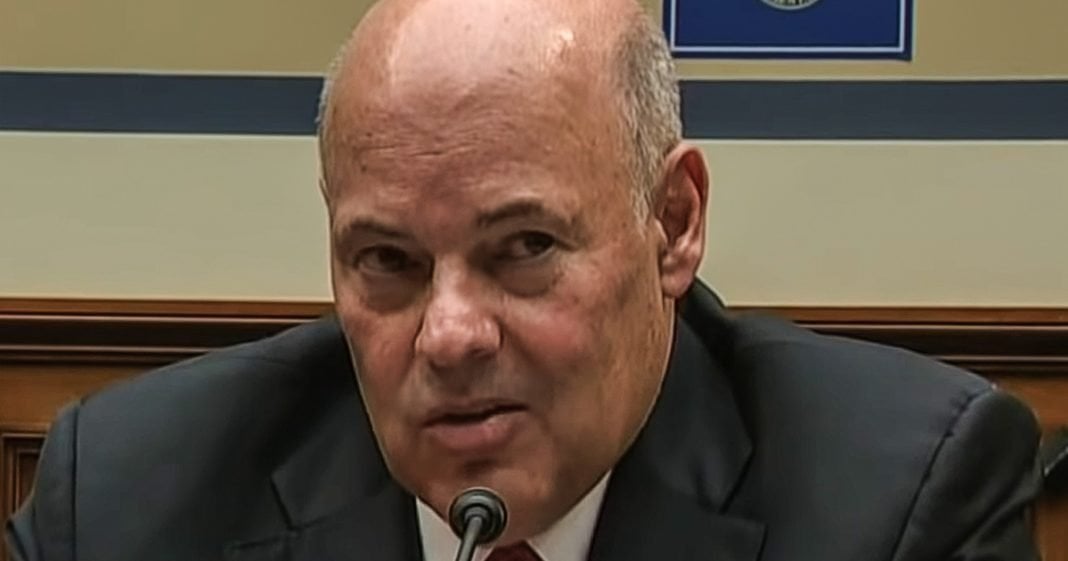 Donald Trump’s crony Louis DeJoy – the current Postmaster General – has been accused of a major campaign finance violation. According to reports, DeJoy has previously told his employees (in the private sector) that they had to donate money to Republican candidates, and he offered to reimburse them for their donations. This is highly illegal, and plenty of people go to jail for this sort of thing. Ring of Fire’s Farron Cousins explains what’s happening.

According to new damning reports, uh, Donald Trump’s postmaster general, Louie to joy. Who’s been in the news for all the wrong reasons over the last month. Uh, now it appears according to these reports that he may have actually engaged in criminal conduct back when he was running his own business called new breed logistics. These new reports say that the joy actually encouraged his employees to donate money to Republican candidates. Now that’s a little ethically dubious right there, but the real problem is that according to the reports, according to actually to join zoned former, uh, human resources to Barbet, uh, he would reimburse employees. If they made these contributions to Republicans, that’s a felony, that’s a state, federal, uh, felony. That is a federal felony. It’s a felony, no matter which way you slice it. So if these reports are accurate, if we can believe this person from Louie to Joy’s human resources department, that this is in fact what would happen then Louie joy, the postmaster general of the United States engaged in felony campaign finance violations, and therefore should be prosecuted as such.

Here is the statement, um, is from David Young longtime human resources director for the joy, uh, is now retired, but had access to payroll records from the 1990s up until 2013. According to the report from common dreams, uh, this is what young said. Quote Lewis was a national fundraiser for the Republican party. He asked employees for money. We gave him the money and then he reciprocated by giving us big bonuses. When we got our bonuses, let’s just say they were bigger and they exceeded expectations. And that covered the tax and everything else did joy claims that he went through his low, Oh, first of all, he claims this didn’t happen. But then he also claims that he talked to his lawyers before any of this happened to make sure everything he did was on the level and that he wasn’t going to get in trouble for anything. But if you gave a bonus based on how much money a employee of yours gave to a political candidate, you know, they more, they gave the more you gave them back. That’s, well, that is felony campaign finance violations. Now here’s the thing. Uh, if this did happen, the statute of limitations on the federal level has expired.

Unless there’s evidence that he did it in 2015 or later, David Young only had access to records up to 2013. The statute of limitations is five years. So that expired in 2018. But the silver lining is that there’s actually no statute of limitations for felonies in the state of North Carolina, which is actually where this took place. Oh, and by the way, attorney general North Carolina happens to be a man by the name of Josh Stein, who happens to be a Democrat. Now I know we’re supposed to be against partisan prosecutions and partisan investigations, things like that. But if the attorney general of North Carolina were a Republican, you can bet that this story would die here. The fact that they are not gives us a little bit of hope that at the very least we’re going to have an investigation because that’s what we need. That’s all we can call for right now is just simply an investigation. If the joy broke the law, if they have the proof of it, take it from there. But at the very least start looking into this.