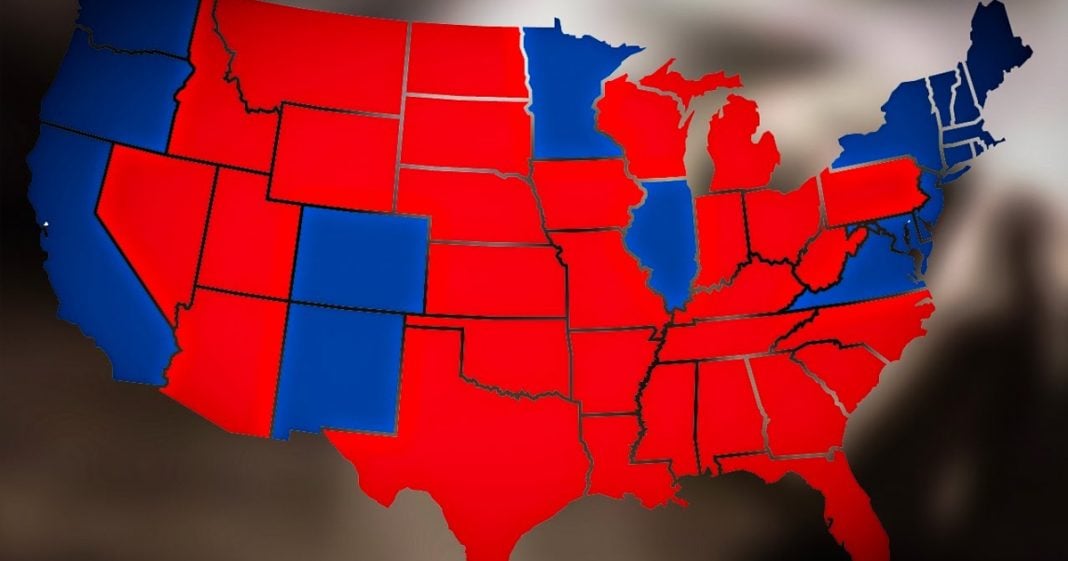 According to a shocking new study, citizens of Red States, on average, are dying a lot younger than their counterparts in Blue States. And the margin isn’t exactly small, either. The study links the early deaths to Republican policies ranging from opposition to increasing minimum wages to increases in the amount of pollution that they allow. All of these things combine result in Republican-controlled states causing people to die earlier than they should be. Ring of Fire’s Farron Cousins discusses this.

According to a newly released study by Jennifer Montez from Syracuse university, red States, meaning States that are being run by Republicans, governors, legislatures in the like, uh, but these red States have a lower life expectancy than blue States, which means that if you were living in a state, according to this new research that is being run by Republicans, you are going to die earlier than if you were living in a state run by Democrats. And that’s not because of the different, you know, atmospheres or the different scenery or anything like that. It is according to this study directly related to the policies from Democrats versus Republicans. Here it is the Montana study reveals that life expectancy in red and blue States began to diverge slowly in the 1970s, but accelerated after 1980, when Ronald Reagan propelled the rise of the modern conservative movement, the year 2010 was another watershed moment. The study says when Republicans swept into power in 21 States and aggressively eliminated liberal policies, noticeably shortening the lives of red state residents.

Um, 85 to 90% of the discrepancy in life expectancy can be explained by the social determinants of health, which includes unemployment income, education, social insurance, health, unemployment, retirement, the environment, exposure to toxic chemicals, uh, civil rights, fair employment, and housing practices, racism, sexism, and other social circumstances, individual behaviors important to how people cope with psychological distress, depression, loneliness, and hopelessness sometimes created by these very same social circumstances to put it in other way, if you live in a state controlled by a Republican, and they’re doing things like letting corporations come and dump their toxic waste into your area, that’s going to shorten your life span. If you live in a state, run by a Republican who says that no little cities, you cannot have a higher minimum wage than the rest of the state, which 25 States right now have policies like that. That’s gonna shorten your lifespan.

If you live in a state run by our Republican, that says, Hey, we’re totally okay. If your business wants to discriminate against people who have a different sexual preference than you, then that’s going to shorten your lifespan. Even if you agree with the policy, all of these things take their toll, economically, socially, all of it, it is all related. So even if you’re living these red States, but these horrible policies may not be affecting you directly. They are still affecting your health. And we’re not talking about you’re going to die a month sooner. In some States, the discrepancy is as big as seven years, you may die seven years sooner. According to this Montana study, living in a red state than in a blue state. So I want everybody to understand that fully when they head to the polls this November, because this isn’t just happening at state levels anymore. This is happening at the federal level. That’s what we get with Donald Trump. The same kind of policies that are shortening your life. State by state are very easily translatable to the federal side of it too, to put it another way, keep electing Republicans. And we’re all going to be sent to an early grave.