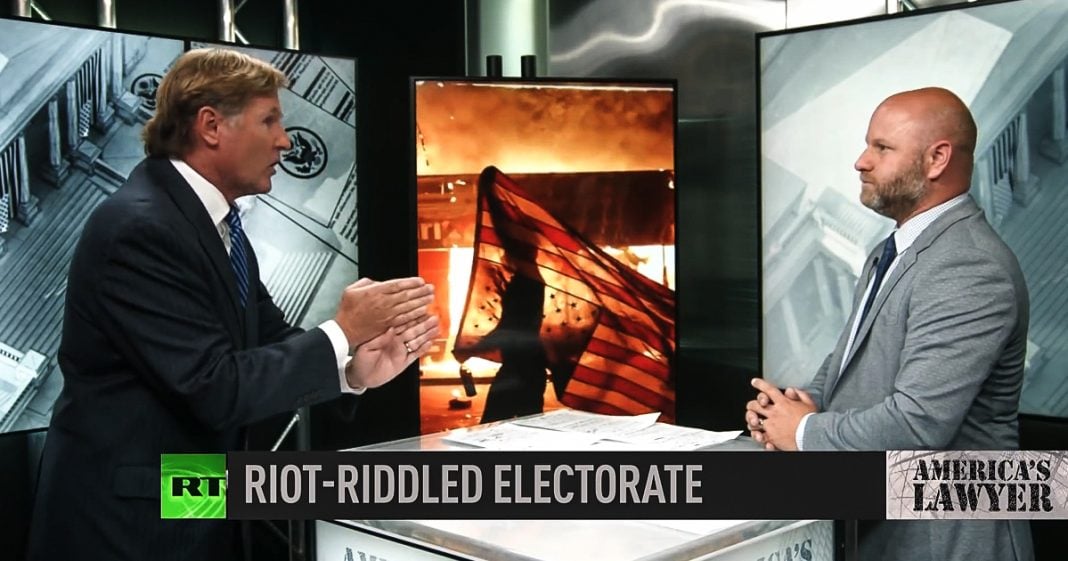 Via America’s Lawyer: Although the pandemic is far from over, ongoing protests in Kenosha and Portland appear to have taken political center-stage, as both Trump and Biden are scrambling to respond to recent violent clashes. Mike Papantonio & Farron Cousins discuss.

Mike Papantonio:             As American cities are rocked by riots, Donald Trump is hoping that voters are going to trust him to keep them safe. Joe Biden, on the other hand, is saying that everything happening right now is Trump’s fault. Joining me to talk about this honestly is one of the best progressive commentators in the business, Farron Cousins. Farron, what is your take? I value your take tremendously as you know. What do you think?

Farron Cousins:                  Oh God, it’s, it’s been quite an interesting couple of days, to be honest. What is so disappointing about what’s happening right now in these cities is that the actual message, the actual movement has been commandeered by these rioters, the, they, they, they, these are people out there in the streets right now, they don’t have an actual grievance. These are people who came out to cause problems, right and left. This is not black lives matter that, that’s doing this. These are people that have hijacked what that message was, what that movement was and now they are absolutely doing everything they can to hand this election to Trump because Joe Biden came out earlier this week, tried to say something about this, that turned into a bunch of gobbledygook, you couldn’t understand what the man was even saying.

Mike Papantonio:             Yeah. I mean, well, you know, you and I’ve been working together what, 15, 16 years now, I know what’s on your mind. I think, you know, what’s on mine. You, you know, what, what’s happening is you have long time credible progressive’s saying pull the emergency cord now. And what they’re saying is that what we’re looking at is another Hillary story for different reasons. You know, the, the, the idea of the general public ignoring the polls that are tightening up right now in swing States, we’re going to have David Lamb on the show. He’s going to give us the details, but in swing States, things are really tightening up for very specific reasons. And so we’ve got very, I mean, friends of ours, people we’ve worked together. Michael Moore used to do a, used to do Air America with me back in the days, I’ve got tremendous confidence in him. He’s saying, pull the emergency cord right now. And here’s what he sees. He, not just him, but this is just as my take. Okay. Jump in any time, this is a discussion, this isn’t an interview.

But there’s this, you’ve got, there’s a pervasive belief among progressives that if we have MSNBC and CNN and Fox news attacking Trump every single day on every single story that that’s good. The numbers are showing, no, that’s not good. We, you have progressive’s believing that if people like Chelsea, Chelsea Handler or Rob Reiner. I mean, Rob Reiner, what did they call him meathead back when he did a show 40 years ago, All in the Family. Barbara Streisand out on front, these are the talking, these are the people talking for the Democrats. The progressive’s belief, oh gee, if we’ve got celebrities out there, we’re going to be okay. You’ve got the late night show hosts talking, it’s not comedy anymore. It’s how much can we, how much can we pile on Trump? I don’t mind that, but I’m a realist and I realize that it ain’t working. You’ve got to hate Trump boat book coming out every single week. It ain’t working and so what we’ve got, we have to rethink all this, you know, this progressive notion of these are the things that are going to work for us. Isn’t this exactly what we saw with Hillary in 2016?

Farron Cousins:                  It absolutely is and Joe Biden waiting a week to come out and finally give this address, which he did yesterday, I think Philadelphia or Monday it was in Philadelphia. Finally addresses this after Trump had been out there every day for a week saying he can keep you, he can keep you safe. He’s the only one who can handle this. Where’s Joe Biden? Where’s Joe Biden? Progressive’s out there begging somebody on the left to show a little bit of leadership Biden, finally dusts himself off and says, okay, I guess, I guess I’m gonna say this. But it, it, it was nothing. What Biden said was nothing. This is all Trump’s fault. Okay. That has a basic misunderstanding built into it about the systemic problems that some of these people have actually faced. Now, again, those aren’t the people in the street causing problems, the people in the street causing problems, like you have said so many times, these are the suburb kids.

Mike Papantonio:             They think they are. They don’t even know what the hell an anarchist is, but they have some time off from college. Hey, let’s dress up like Batman, go to the streets and mixed in there are crazy people that shoot people, that hit people over the head with bricks.