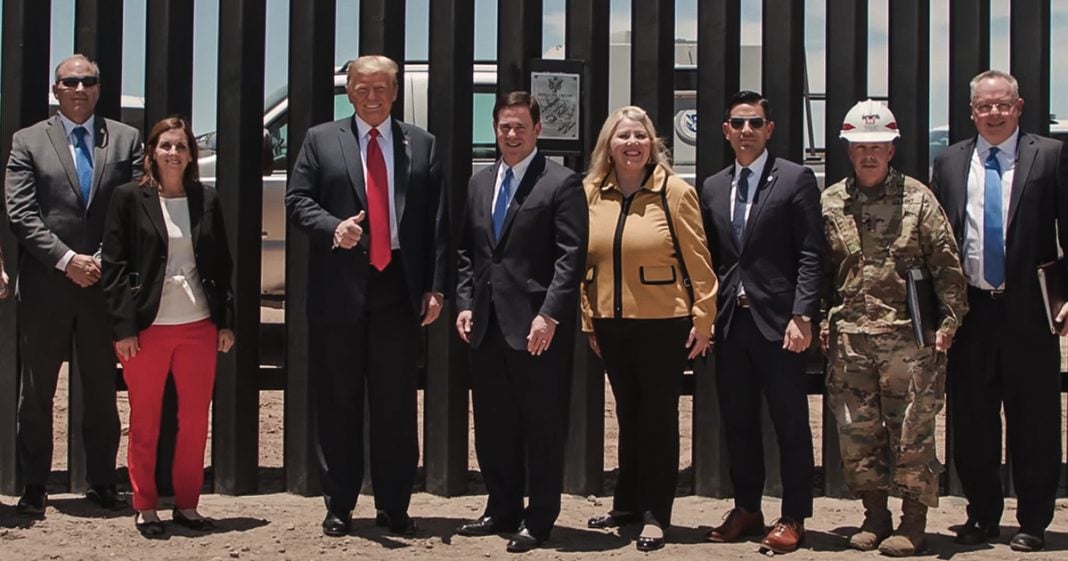 According to new reports, an inspection revealed that the border wall constructed by Donald Trump’s favorite private contractor, and partially paid for by the We Build The Wall group, is already crumbling due to shoddy work. The grifters who are facing serious counts of misusing the charitable money apparently wanted the job done fast and cheap so that they could show results and pull in more money, and this is likely going to bite them hard in their court hearing, but Trump’s contractor buddy is likely going to ruin his reputation, too. Ring of Fire’s Farron Cousins discusses this.

Well, as we get closer and closer to the election in November, we’re probably going to start hearing a lot more about Donald Trump’s border wall. I mean, after all, that was the big thing that he campaigned on in 2016, talked about it for the good first three years of his administration. And then suddenly last six, seven months, I haven’t heard anything about the border wall. Now, admittedly, there has been a pandemic and an economic collapse in there the last seven months, but the border wall is still a thing, right? I mean, parts of it have been built. Some of it’s been built by the federal government. Other parts have actually been built by a private organizations. You know, like the, we build the wall group that all recently got arrested for charitable fraud for using the money to enrich themselves. But Hey, they actually did pay $1.5 million as part of a, uh, you know, 20 to $30 million project to build a three mile stretch of wall, uh, along the Rio Grande.

And they actually hired a company called Fisher sand and gravel to build that part of the wall and Fisher sand and gravel has, uh, been one of Donald Trump’s preferred contractors to build the wall. He has recommended them. He has spoken highly of them. And that is because the president of the company, Tommy Fisher is not only a big Trump donor, but somebody who regularly appears on Fox news to talk about how awesome Trump is. And of course, what a great idea of the wall is because he stands to make billions from it. If he gets the contracts. But according to a new analysis, by a engineering groups that were actually ordered to do the analysis by the court system, Fisher’s not doing a good job building the wall and the a few miles of wall that he has been hired to build by, by private funders, not by the federal government, but the few miles after just a few months is already starting to crumble because it was very shoddy. And according to engineers, who’ve looked at it. Not only was it shoddy, but plenty of corners were cut, you know, subpar equipment and products used. And worst of all, he didn’t take into account how the terrain itself would affect erosion, specifically being right there on the Rio Grande with the sand and silt, the water, they say any of that is going to cause this thing to absolutely fall down

In short, this guy doesn’t know what he is doing. And this wall hasn’t even been up for a year and it’s literally falling apart right now. And this is a guy that Donald Trump wants to give big contracts to, to build the whole wall. This is a group that the charity fraud folks over at, we build the wall, gave one and a half million dollars to wow, Tommy Fisher, man, you, you must be really proud of yourself actually Fisher just about two months ago. I think it was in July. Uh, went on a podcast, hosted by Steve Bannon of all people and a band and asked him about these accusations of shoddy engineering work. Cause they were floating around back then before this report came out and he said, you know, that’s ridiculous. None of that’s true. We’re doing great work.

And you know, I’ll meet anybody down there and I’ll show them how awesome this is because I, I, you know, I’m great at this and banned and then went on to say, I’ve learned everything I know about building walls from you and Mr. Fisher, whatever the hell that means. Yeah. Maybe you should find another teacher band and maybe you could find one in prison cause you’re facing 20 years, by the way, on the counts that you’re facing. Nevertheless folks, the wall has been a big, giant grift for the right, whether it’s the, we build the wall. People, whether it’s, you know, uh, Fisher, sand and gravel, anyone who thinks they can pocket a little bit of cash off this lofty promise from Donald Trump, that he has no intention of actually following through on they’re going to do it. And the Republican donors out there, the average Republican voters, you’re going to be the ones footing the bill for it.