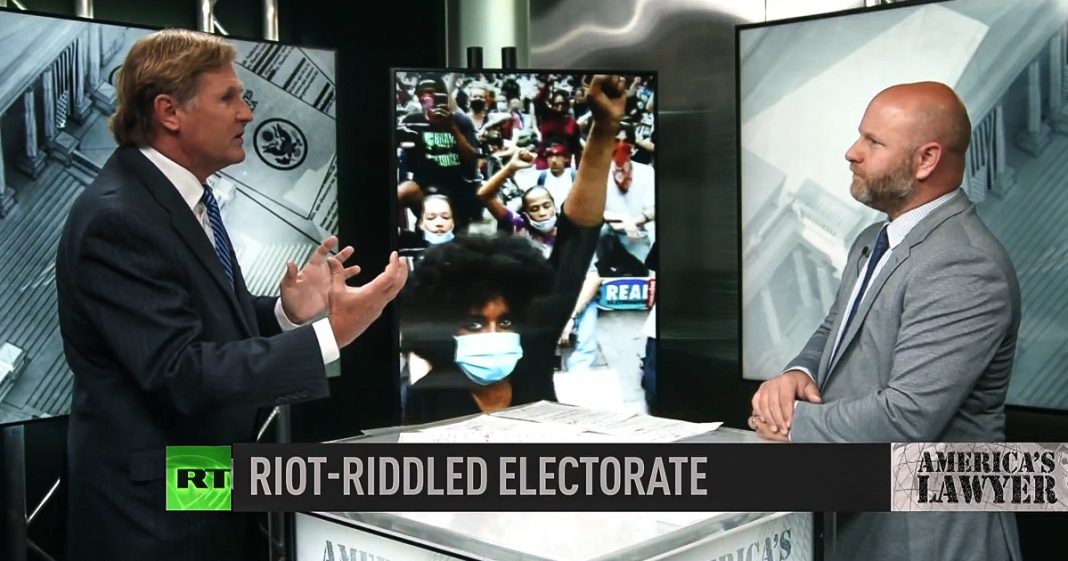 Via America’s Lawyer: Headlines are emerging daily to instill fear and paint the Democrats as failures. Mike Papantonio & Farron Cousins to explain more.

Mike Papantonio:             You know, you, you and I talk about this all the time and that is what is the right doing? You know what I did today before we came on, I looked at the headlines. Now this is what is happening. This is why the right is moving. These are the headlines from Breitbart, right wing news source. Daily Caller, you talk about them all the time, right wing. All, you know, all of these, Drudge, you know, in the middle now, I guess. Here’s the headlines. They’re, they want to show us chaos in the streets, right? This is what the right, this is what middle America, not just right wingers are reading every single day. And the, the, the progressives are sitting over there, scratching their heads, saying, oh my God.

Why is nobody excited about Biden, but everybody’s excited about Trump? Here’s the headlines. St. Louis police officer, after being shot in the back by, by, by rioters dies. Portland killer 100% Antifa. These are the headlines. Kyle Rittenhouse hunted down like an animal before he was forced to use his rifle. Taxpayer funded unemployment given to Antifa riot, Antifa rioting thugs. Headline: LA SWAT team called after shots are fired at the Trump caravan. Headline: 46, 46 people shot in Chicago this weekend, 10 of them dead. Headline: Armed residents standing guard to protect their children, to protect their neighborhood in Kenosha. Headline: Auto Zone stabbing suspect says he felt he needed to find a white male to kill. Headline: Kamala Harris, police officers, it’s time they face the consequences, Democrat VP. Rand Paul and wife, headline: Rand Paul and wife believed they were going to be killed by black lives matter and Antifa mob. Headline: Biden blames police for violence and rioting. And the, and, and progressive’s go, gee, I don’t understand why the polls are moving. This is Nixonland all over, isn’t it?

Farron Cousins:                  Well, well, progressives don’t say that, we understand it. It’s the actual Democrats who don’t know why it’s moving. And see, here’s the thing though, the right wing media has such a powerful grasp and they are very well coordinated. I mean, we have had plenty of headlines that have fizzled over the years of, you know, just earlier this year, the QAnon woman that loaded up her car to go kill Joe Biden. Where’s that big story? You know, the guy who loaded up his van with guns and explosives to go destroy CNN, because they were mean to Trump. You know, there’s plenty of things that you can counter all of those with, but there is no coordinated message and even if there was, the Democrats are so weak at messaging, they couldn’t put it together if their life depended on it.

Mike Papantonio:             And I just don’t know what else to say other than the fact that Michael Moore’s right. Bill Maher, he said he had he’s, it’s his first time he’s ever been real concerned. He’s right. I’m real concerned too. People watching this program right now will say, oh my God, how is Papantonio and Farron saying all these terrible things, because it’s the truth. Not because I want Trump elected or you want Trump elected, but the, the, the Democrat regime has become so frigging hysterical that we can’t even talk about these obvious things. Those headlines that I just read, those are all today’s headlines. And it’s every single day that middle America is getting this headlines and to tell you the truth, it’s scaring the bejesus out of them.

Farron Cousins:                  You know, I have to point out too, you have Yvette Nicole Brown, who was, she was on a show called Community. She’s a big Democrat. She actually came out and said, we never had anything like this. We didn’t have riots or protests while Obama was president and Biden was vice president. She said that three days ago, and everybody pointed out, the progressives did, they said, have you not heard of Ferguson?

Farron Cousins:                  This, this, this didn’t just evolve under Donald Trump. This isn’t a thing that only happened because of Donald Trump. But that’s why I bring up, there are systemic problems that have to be addressed and that is what initially the actual people that were, were protesting peacefully, that is what they wanted. These movements got hijacked.

Farron Cousins:                  And we see it happen all the time. They either get hijacked by the grifters, the people who think they can make money off it.

Mike Papantonio:             These forgotten celebrities who want to be heard. Rob Reiner, who in the hell’s Rob Reiner? Meathead back in All in the Family. You know, Barbara Streisand, the way we were. That was the last thing I can ever remember she sang. These are the people talking or, or, or, you know, I could go on forever. These are people most people don’t even know who the hell they are.

Mike Papantonio:             And you got middle America, reading headlines juxtaposed with that.

Farron Cousins:                  Right, at the same time, the, the economy is collapsing. We’re still in the middle of a pandemic. It’s not even safe to send our kids back to school, but this has become the thing. You know, Portland, Kenosha and Chicago, these three cities and this is now that they’ve let it get away. The Democrats let it get away from them. They let it become the issue.

Mike Papantonio:             Projection. I did the same thing with Hillary Clinton and I got so much hate mail. I got so many hate comments. I said, I said, four months before the election, we could see it happening Hillary was going to lose.

Mike Papantonio:             I’m telling you it is Trump 2020, just like Nixonland, it is going to be Trumpland. And just like Michael, Michael Moore said, everybody’s sitting back fat, dumb and happy believing that Biden can babble away in the basement and that everything’s going to be okay.

Farron Cousins:                  No, no. Biden’s lack of leadership, his inability to come out and actually give a, a unifying message, a coherent message. It doesn’t even matter if it’s unifying anymore. Just string words together that make sense.