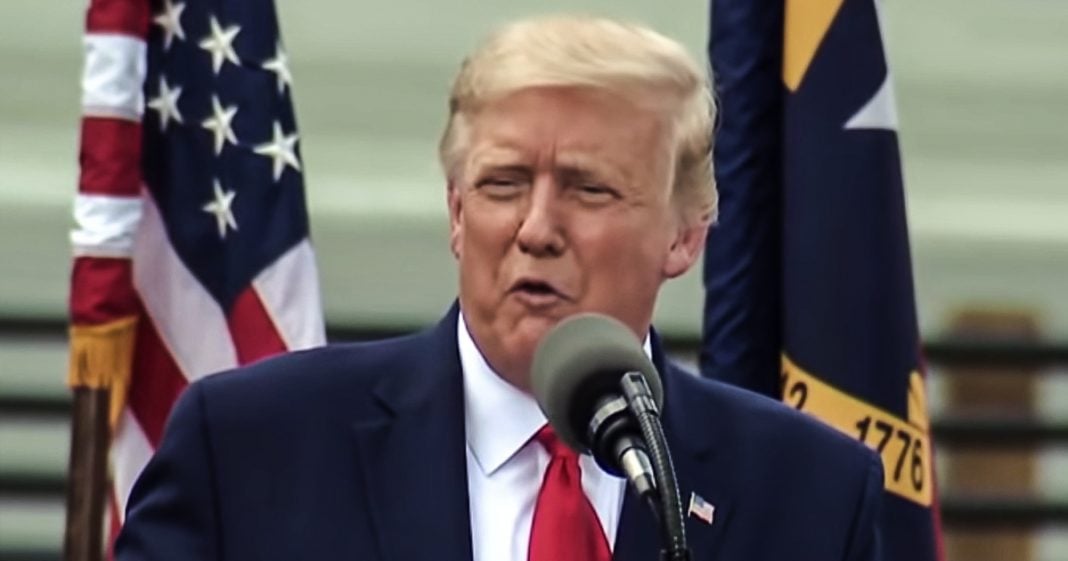 The story from The Atlantic that claimed Trump made disparaging and insulting remarks about fallen U.S. soldiers has apparently divided the nation, and that includes the Fox News Nation. The network has descended into chaos following their reporter’s claims that the story is true and Donald Trump’s calls for the reporter to be fired. Ring of Fire’s Farron Cousins talks about the controversy surrounding the story and what’s happening behind the scenes at Fox.

Well folks, it’s certainly been a, quite an interesting couple of days here, essentially starting last Thursday, when we got the report from the Atlantic about Donald Trump, allegedly making these disparaging remarks about fallen us soldiers, uh, essentially throughout the entire 20th and 21st century, referring to them as losers, calling them suckers, asking what in the hell were they doing when they had nothing to actually gain for themselves from serving in the military and ultimately dying in the military. Uh, some of these comments were made during a trip that Donald Trump made to France in November of 2018. And this all just became public last week, according to multiple anonymous sources in the Atlantic. And that, that little part of it, the anonymous sources part is what’s kind of thrown everybody for a loop. Uh, Fox news claims that they independently did confirm what the Atlantic reported as did several other media outlets.

I think CNN, Washington post others were able to confirm corroborate, uh, essentially validate the entire story from the Atlantic. But even though Fox news says they confirmed it, that still doesn’t mean that Fox news believes it. And starting on Friday, you had chaos start breaking out, uh, both behind the scenes and on the air at Fox news where you had personalities like Laura Ingram, Greg Gutfield among a few others come out and say that the story was totally false. Nothing believable about it, even though it literally falls in line with everything Trump has said and done with regards to our troops since day one, they said, Nope, no way it could have happened, even though our own person already confirmed it, that person’s wrong. Trump is right. And by the way, Trump actually called for the Fox news reporter who confirmed it to be fired. So he himself is engaging in that a cancel culture that Republicans hate so much just because this woman came out and said, yes, I was able to corroborate this story with others.

Trump did in fact say these things. So Trump says, fantastic. You should lose your job. You should lose your job for doing your job is basically what the president said. And so the turmoil at Fox news continues. And that’s what we’re left with today. But this kind of shows you what it is exactly is taking place with conservative media outlets. Uh, there’ve been a lot of people out there saying, Nope, these are anonymous sources so we can not believe them. And sure, that does bring into question the credibility of it a little bit, but anonymous sources have been used to tape down some of the biggest institutions known to man throughout modern history, just because of sources. Anonymous does not mean they are fake these journalists, these news outlets, they understand what is at stake. If they’re simply making this stuff up, not to mention the fact that Donald Trump is the kind of guy who has repeatedly sued different media outlets in the past.

If this story was in fact fake a lawsuit, a libel lawsuit would have already been filed by the president of the United States. As far as I’ve seen that lawsuit hasn’t even been filed. Hadn’t even been mentioned. He’s just saying it’s fake, but he’s not willing to actually take him to court over it. When he’s willing to take everybody to court over every little grievance he has with them, if it were fake, the lawsuit would have already been filed. That’s the bottom line. The fact that one has not been filed to me, confirms it now, perhaps you think differently. That’s fine. I think you’re well, well, in the wrong on that, but that’s okay. Cause the fact of the matter is if a lawsuit were filed, then in court, the anonymous sources would be revealed. They could likely get those names shielded from being released to the public, but it would shut Donald Trump up.

It would shut the lawsuit down, thus confirming the story. And that’s why we’re not seeing a lawsuit being filed because just the co just because the sources are anonymous to us does not mean they’re anonymous to the Atlantic. And these people would in fact, probably be called as witnesses in any libel suit that Donald Trump would file. They would corroborate the story, thus proving the Atlantic, right, Trump, wrong, confirming what he says and the public would never know their names, but they would know that the lawsuit was dismissed. Trump’s in a lose lose here because there is nothing he can do. Unless of course the Atlantic just decided to randomly totally make all this up. The odds of that, I’d say it’s pretty slim.