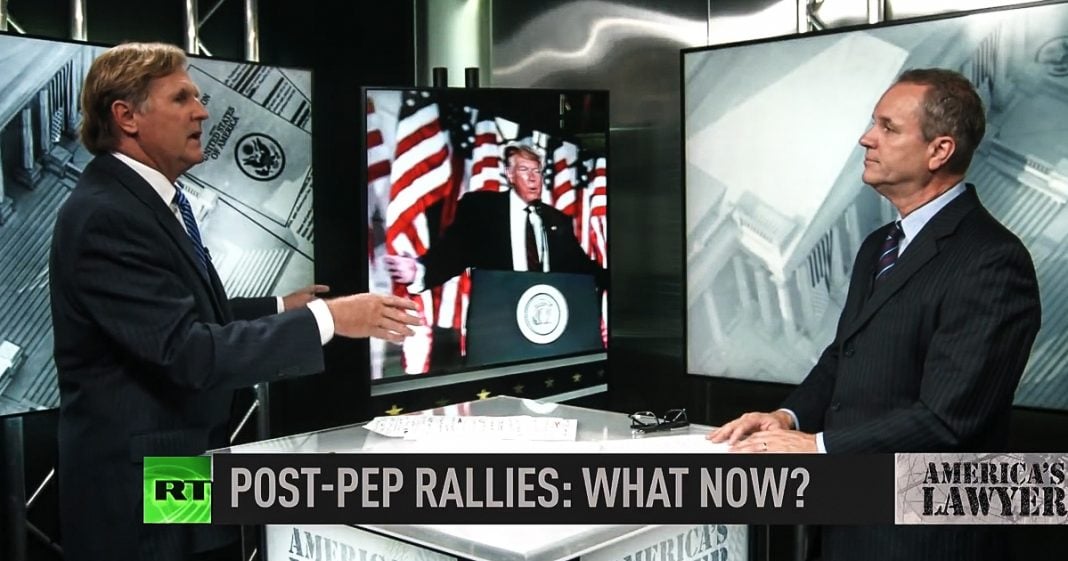 Via America’s Lawyer: With both the Democratic and Republican National Conventions come and gone, what impact have these glorified pep rallies had on voters nationwide? Media analyst David Lamb joins Mike Papantonio to discuss.

Mike Papantonio:             Democratic convention in the books, we’ve talked about that already. Did the president get any sort of bump from, from that show?

David Lamb:                         Neither candidate actually got very much of a bump in this. I’ve got a, a morning consult poll taken after the Republican national conventions and now both conventions are in the book. There’s just been a little bit of a movement in the president’s direction. What I would warn against Pap, at this point a couple of months out, is paying attention to these national polls. The, the, the discussion points. What, what are the, what are the messages that the debates and the discussions are framed around and who do those, who’s, who gains the advantage there? You were talking earlier about the Nixonland. I would advise our viewers to go back six weeks whenever you called this playbook, it’s the law and order playbook. You’ve predicted it a couple of months ago. It has, it is in action right now. That is what is happening. If there, if there were a drinking game, every time Trump said law and order, we would all be hammered.

Mike Papantonio:             Well, look at his ads. You know, Rick Perlstein, I, you know, the reason I think Nixonland and the people that, that attack this idea, they need to read the book before they attack the idea.

Mike Papantonio:             Lee Atwater learned under Donald Segretti. These are all Nixon people. And they know how to take things like Kenosha and Portland and Seattle and Chicago and New York and Antifa. They know how to take all that and turn it into something that scares the bejesus out of people. Are polls showing that that’s probably taking place?

David Lamb:                         Polls are showing movement in terms of, the suburban voters this election are, everyone’s going after those undecided, more independent, more moderate if you will, suburban voters, that’s where folks are going. Trump got them in 2016, there’s a battle for them today. What are those suburban voters? What’s, what’s causing that movement? As the discussion switches and kind of pivots from the Coronavirus to, to your safety, to law and order, to justice and the, and the protests are, are framed more as, as anarchists. And, and the violence and the fires and the looting.

Mike Papantonio:             And now, where is it? How, how has that regarded? The looters, they’re not, they’re not called protesters anymore. They’re called rioters.

Mike Papantonio:             They’re the, the stories are people shooting. I saw a headline today where they talked about the police officer was shot in back of the head by a protester.

Mike Papantonio:             And so they’re seeing these kinds of stories every day. And the numbers you believe are tapping into that?

David Lamb:                         They are, there is movement there. They’re, Trump is seen as more decisive and more, more of a stronger leader in that sense. Biden is seen as weak. The basement strategy is coming back to bite him because it seems as though he’s either, and this is the view with, with many of the voters, he’s either avoiding Trump or he’s avoiding the controversy and calling out and, and, and being a decisive leader the, the president of the United States has to be. Whenever this, whenever the discussion is on law and order on, on rioting and looting, Trump wins.