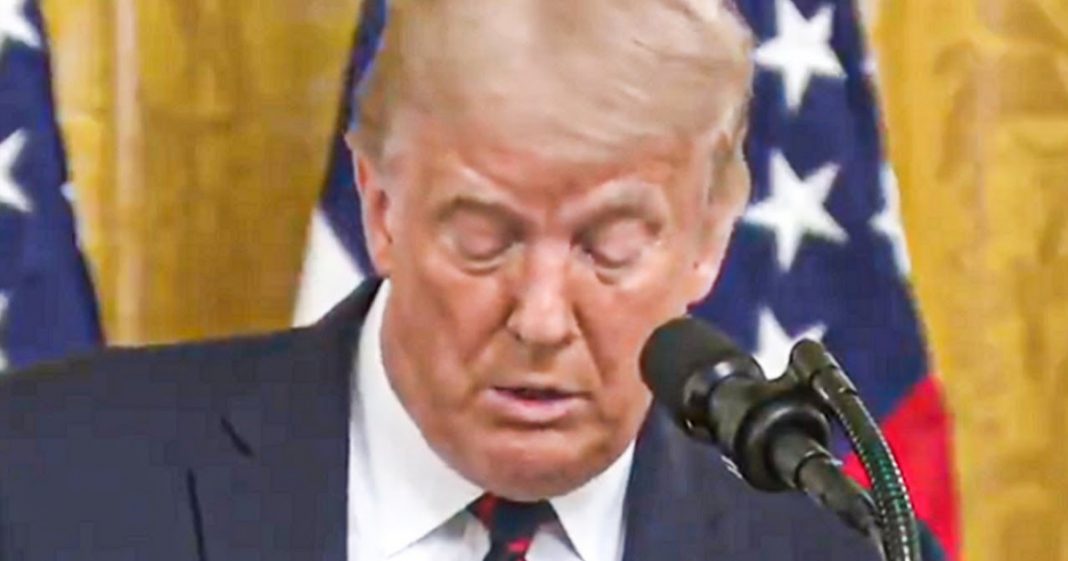 The Republican Party can no longer pretend to be the party that “Supports Our Troops.” Reports are surfacing saying that Donald Trump has repeatedly referred to fallen American troops as “losers” and that he referred to amputees returning from war as some kind of freak that no one would want to look at. This man doesn’t understand what it means to sacrifice your life for something that isn’t money, as Ring of Fire’s Farron Cousins explains.

So yesterday the report came out stating that Donald Trump has repeatedly on multiple different occasions were referred to fallen us soldiers as losers and suckers. And he’s also made disparaging comments about amputees soldiers coming back from fighting overseas, missing limbs, uh, saying nobody wants to see that essentially acting like there’s some kind of freak show because they went out there and sacrificed their body for the United States for service to the United States. But the ones who died get it even worse because they’re losers because their dad, if you were fewer winner, you’d still be alive. I guess, in the eyes of Donald Trump, this major new report came from the Atlantic and it starts with the story 2018. Donald Trump is in Paris, uh, and he’s asked to go, or he was planning on going, um, to the Bellwood cemetery. And that was the time. Remember that he decided not to go cause it was raining. And he said, Oh, well the helicopter can’t fly in the rain and darn it. These cars can’t, they can’t drive us. So I guess I just can’t go. Truth is according to the people who were with him, he was terrified of what it would do to his hair. But in order to justify that, he said to them, according to four different people, why would I go there? These people are losers. They died, they lost the losers.

These were American soldiers who gave their life in service to this country. That was not the only time he did it. Um, another instance he was with John Kelly prior to Kelly being his chief of staff, uh, at an event honoring Kelly’s swollen son who died in 2010, uh, in Afghanistan, I believe it was. Um, and Trump actually asked Kelly, I don’t get it. What’s it. What’s what was in it for him. Why did he do this? What was in it for him? That’s what the president thinks of, of the military. And that is why military leaders, um, military officials actually hate him. Reports have already been coming out today saying that they hate him because he hates them because he can’t understand what it’s like to make a sacrifice. The only thing Donald Trump understands is money. So why on earth would anybody risk their life for something that’s not money? The man cannot understand it. He is incapable of real human emotion.

He truly is a psychopath in that regard, textbook psychopath. And he’s already out today denying that any of this took place and also in his denials said he never called John McCain a loser, except you did. Cause that’s in a tweet that you didn’t delete like that evidence literally still exists and is going around the internet today, calling out your lie. And because you’re willing to lie about something that we already have the evidence of, and we’re, we’re flashing it in your damn face because you’re still willing to lie about that. I have no doubt that every single one of these stories in the Atlantic is true. Every single one of them, because this is all on par with behavior that the president has exhibited in the past. Now let’s get to the other issue here. The Republican party itself, I can’t tell you how long. And I live in a military town, literally smack dab in the middle of three separate military bases.

I cannot tell you how long we have seen the claims from these Republicans, especially, you know, down here where I am, that Republicans love the troops. The Republicans support the troops Democrats hate the troops. They don’t respect them. They don’t appreciate them. They’re awful. And that’s why most of these military folk are Republicans. They are you still a Republican. Now, this is what he thinks of you. He has no respect for you whatsoever. He openly mocks you. He’s openly disgusted by you. You want to, you want to continue to support that because if you do, you’re selling out all of your brothers and sisters in the military, every one of them past, present and future. But that’s a choice you have to make, you know, who this guy is now is that who you choose to follow is that who you choose to support? Because if so, you’ve got generations of dead American shoulder soldiers looking down on you with absolute, utter disgust. Ironically, the same way that Trump looks at our soldiers.