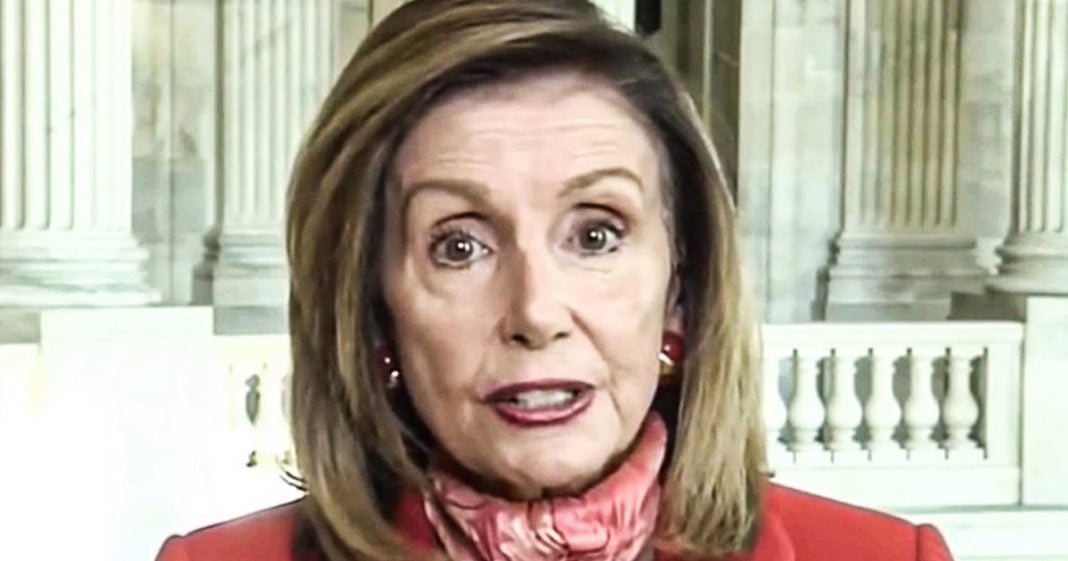 House Speaker Nancy Pelosi has reached a deal with Treasury Secretary Steve Mnuchin to NOT allow the federal government to shut down at the end of the month, thus avoiding a potentially bad scenario on election day. Unfortunately, the deal means that the American public gets absolutely nothing to help them during this massive economic collapse, so how can there actually be any political advantage to making this deal for Pelosi? Ring of Fire’s Farron Cousins discusses this.

So in case you haven’t been paying attention, the government was actually set to shut down at the end of September. Uh, as a funding, bill has not been able to pass the house of representatives and make its way to the white house. So this week, Nancy Pelosi and treasury secretary Steven Mnuchin have been meeting negotiating, trying to come up with some kind of stop gap measure to prevent the government from shutting down at the end of September and yesterday, it was announced that a house speaker Pelosi and Mnuchin and had in fact reached an agreement and agreement that will avoid a government shutdown and also offer absolutely nothing to people being hurt by the economic collapse caused by the pandemic. Nancy Pelosi went out there, made an agreement negotiated for God, knows how long and walked away with nothing, nothing.

I don’t know how else to spin this. I don’t understand some of the, uh, you know, pundit class out there who make a hell of a lot more money than I do doing this, telling us that somehow Pelosi pulled off a victory here. What did she do? She agreed as part of this, a resolution with Mnuchin that they were going to make it a clean bill, no writers, uh, no stimulus, uh, for the pandemic, like nothing. That’s actually going to help people. We’re not going to add in other things to help people cause Republicans in the Senate won’t let us do it as a separate bill. So we’re not even gonna try it on the funding bill. So you just get your funding Mnuchin and you get your funding. You get what you want.

And I guess that’s how Pelosi negotiates now, right? She walked away from that with absolutely nothing. And let me go ahead and address what some people might be thinking. Well, she prevented a government shutdown, you know, a month before an election. Wouldn’t that bode ill for the Democrats to that. I say, who cares if they’re not going to fight for you? Why do we care? If they get hurt in the election? Why do we care if they lose? They’re not doing anything for us now. So when them losing only make it, you know, more possible that we’d get somebody in there who would do what we need them to do. Like, I, I don’t think it’s important to save the jobs of people who aren’t doing their job to begin with. That makes no sense to me. But this negotiate a negotiation here that Pelosi worked out with Mnuchin she gained nothing from it.

The democratic party gains nothing from it, but most importantly, the voters gain nothing from it. I understand the who work in industry or not necessarily industries, but people who work for the government who would be at risk of being furloughed, not getting paychecks during the shutdown. I understand your, uh, ecstatic by this decision to not shut down the government. And yes, I feel for you. And I do agree that we should not shut the government down, but I also think that if you’re going into negotiations, you should start from a position of power. Instead of walking in and saying, we don’t want to lose in November. So let’s do whatever we have to do to avoid a shutdown. You walk in there and you say, I got 40 million people that lost the jobs. I got tens of millions of people facing eviction. Right now the video is already starting to go viral. We’re going to get these people some aid or your government is shutting down. That’s what Pelosi should have walked in that room and said, that’s what a leader would have gone in there and said, that’s what somebody who had a concern in the world would have said Pelosi doesn’t Pelosi is so far removed from actual human beings that she is now completely ineffective at her job. Pelosi has to go because as long as she is holding that leadership position in the house of representatives, nothing in this country will ever change.