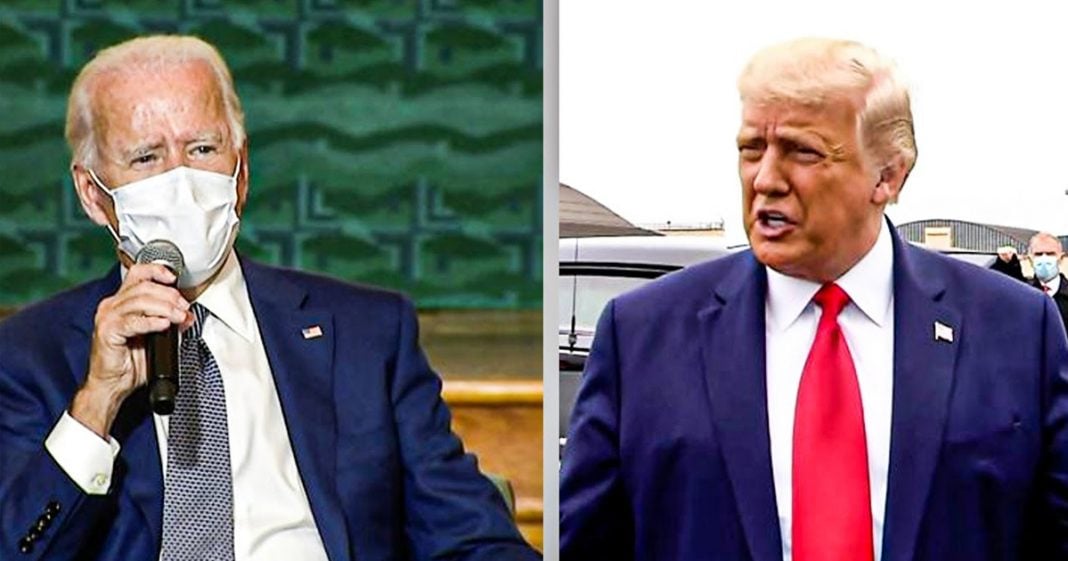 Joe Biden is starting to do things the right way, and this week he traveled to Kenosha, Wisconsin to visit with the family of Jacob Blake. This happened just days after Trump traveled to Kenosha and created a super-spreader scenario by telling his rally attendees that they can remove their masks and then proceeding to stoke fear and division and hatred. Biden is rising to the occasion and Trump is trying to make things worse, as Ring of Fire’s Farron Cousins explains.

Here’s a tale of two different people running for president, both of whom traveled to Kenosha, Wisconsin. This week. One of them traveled to sympathize with property and to piss people off the other, traveled to Kenosha, to sympathize with a family of a man who was shot seven times in the back by police officers. That man was Joe Biden. Joe Biden did something great this week. And I am absolutely going to give credit where credit is due and credit is due here because I have, I know we’ve seen the videos all week, Joe Biden making gaffs accidentally saying Brianna Taylor should be prosecuted. Uh, when clearly he was talking about the cops who shot her, but behind all of that behind all of the viral videos is a story that was not widely reported, that his campaign did not publicize because it wasn’t just about getting some good publicity off it. It was about showing what leadership really can be like.

Joe Biden traveled to Kenosha, Wisconsin met in an airport terminal with the family of Jacob Blake and Blake himself actually joined by telephone. Any empathized with them. I talked to them, he heard them. That is the kind of thing that has to happen in these situations doing this is what helps people heal. It’s what helps a nation heal as long as there is followup action. Yes, but this is the first step. And you can’t do anything if you don’t take the first step and Joe Biden, who is not even president took the step. What did Trump do? Trump went to Kenosha was denied permission to walk around that destroyed building. So we reached out to somebody that used to own the building and they said, yeah, I guess you can walk around there. I’ll pretend I own it. Whole thing was staged. Whole thing was staged. Like that should be a bigger story. Trump sympathized with the property with some broken bricks, as opposed to the actual victim and his family. So Trump’s sympathizes with property in a very stage, completely fake video and photo op. Then he gives a rally.

First thing he says that the rally is, feel free to take your face mass off. So he creates a super spreader environment for the coronavirus. And then he Stokes fear and hatred and division during his little speech. Our choices in November could not be more distinct. One. Man went to Kenosha, trying to make things better. One went to Kenosha to make things worse because he thinks that’ll benefit him politically. That’s what we’re looking at on the ballot in November, Joe Biden did the right thing. Is he always going to do the right thing? Is he always going to do the progressive thing? No, but we have to understand that Donald Trump never will. So the choice is between sometimes getting a decent thing and never getting a decent thing. That is the choice we have to make in November. And for me, I’d say it’s a no brainer.