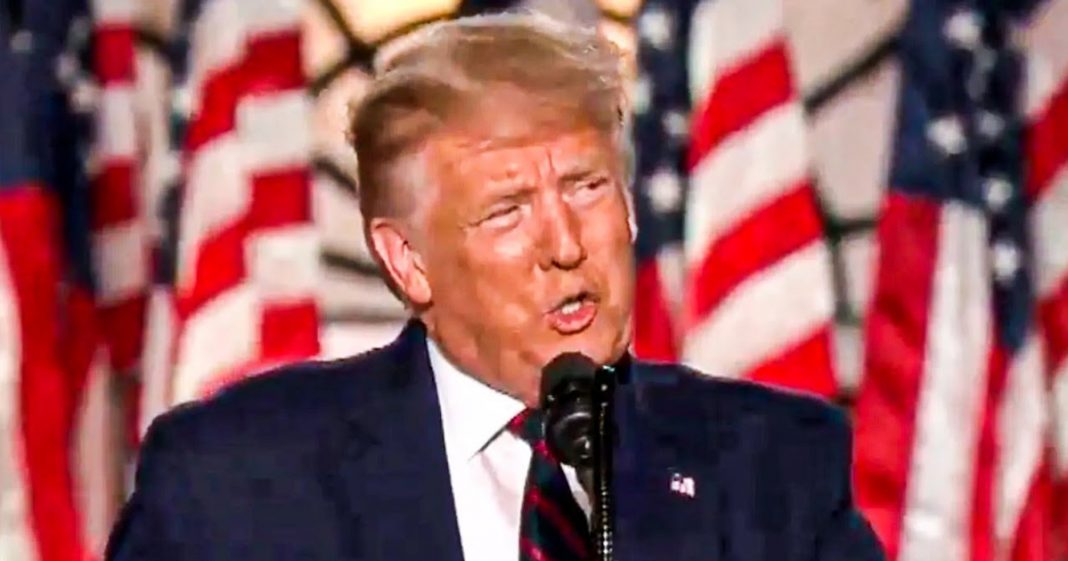 According to the fact checkers, Donald Trump’s speech at the RNC last week averaged a lie per minute (actually it was one lie every 56 seconds.) This is a new record for a President who has already told more than 20,000 lies while in office. The only question remains whether or not this nonstop barrage of lies is actually going to penetrate the minds of the voters. Ring of Fire’s Farron Cousins discusses this.

According to an analysis out earlier this week, Donald Trump average one lie every minute of his hour long RNC speech last week, except that’s not actually accurate. Donald Trump did not average one lie permitted. He average one lie every 56 seconds during his RNC speech, which actually lasted a little over 61 minutes. So if he were a car, just to put this in perspective, if he were a car traveling down the highway, he would be lying at a rate of 60 miles per hour. 60 lies per hour is basically what it is. That’s how that’s how fast the president was lying during his RNC speech, too many lies that it took fact checkers four or five days to finally come out with this analysis and say, okay, we’ve been through it. We Ulla, we we’ve identified all the lies. Here’s here’s what you got. We’re probably going to go take a little bit of a break right now, but that’s what we’re dealing with with this man who has already told more than 20,000 lies since being sworn in as president.

The question is, how does anybody in this country actually still support him? How is he even close to Joe Biden in the polls? And I know a lot of us do buys and all that. Great. But for real folks, I mean, let’s, let’s just be honest for just a few minutes. What is it about this liar that attracts you to him? What is it about what he has done for this country that makes you think voting for him as quote, keeping America great. Can anybody offer any kind of actual logical reason for that? How are you better off today than you were four years ago? Yeah.

How are his nonstop? Constant lies a good representation of what we want sitting in the oval office. And I know politician law, he’s a straight shooter. He tells it like it is no, he doesn’t tell it like it is. He tells it like it is in his head, but that’s not like it is out here in the actual world. All of the arguments that we have heard from these Trump supporters over the years are absolutely bogus as bogus as the nonstop string of lies that comes out of this man’s mouth. Every time he gets in front of a camera or a crowd, that is what he’s all about. Do you know, why do you know why we get this nonstop barrage of lies? Because he has nothing real in his life to talk about, you know, back in his business days, he would lie through his teeth.

He would lie to newspapers. He would threaten to Sue them if they actually told the truth and he lost some of those suits too, by the way, he would pretend to be his own publicist, John Barron, I think it was. And he would call, uh, you know, media outlets and leave these glowing reviews and talking about how great Trump is and the Trump organization, he had to lie. Cause there was nothing real about him. There was nothing actually successful about him. The man has failed upwards most of his life, except for the few times when he has failed backwards, the way you’re supposed to fail and his administration is no different. And that’s why he’s lying at 60 miles per hour, because there’s nothing real. There’s nothing good about his administration that he can legitimately brag about. So he has to resort to trying to pull us into his fantasy world. Hopefully enough voters understand that. What he’s telling us is not reality because if you get sucked into his fantasy world, the next four years are going to be even worse than the previous.