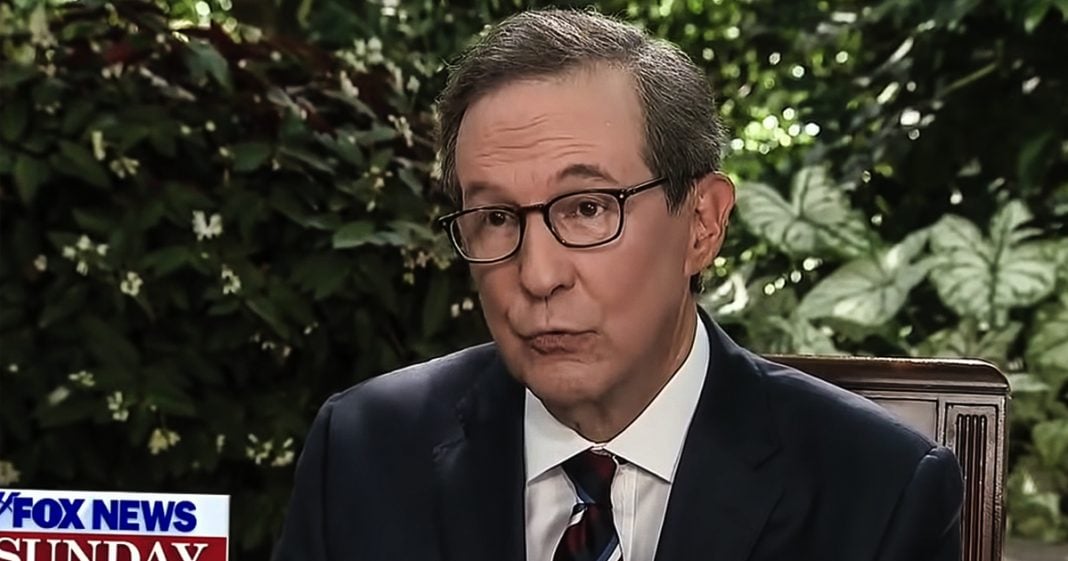 Donald Trump has to be angry at the selection of Fox News host Chris Wallace to moderate the first presidential debate. After all, Trump has spent the past few years personally insulting Wallace in the media. Wallace has a reputation for calling out lies on both the Right and the Left, and his selection could lead to a far more interesting debate than what we’ve seen in the past. Ring of Fire’s Farron Cousins discusses this.

You know, we haven’t even gotten to the first presidential debate yet. And these debates for over a year now, by the way, uh, have already been a complete circus. Yeah. As I’ve mentioned, you know, a year ago we were getting reports. This was long before it looked like Biden was going to get the nomination that Donald Trump was considering, uh, skipping out on the debates. Uh, according to those closest to him, he was afraid, obviously the media wasn’t going to give him a fair shake. They were going to be in the pockets of Democrats. So he was thinking about maybe just not even doing the debates that was back when it looked like he was going to have a tough opponent, but then when it looked like it was going to be Biden, Trump was like, let’s do more debates. Let’s do more than three. Let’s do lots of debates.

And then the Democrats were like, well, I don’t know that Joe Biden really needs to legitimize Trump by being on the same stage with him. That’s actually from Nancy Pelosi just a week ago. Um, so it’s been quite the show, but we found out yesterday that the moderator of the very first presidential debate is going to be Donald Trump’s most hated host from Fox news, Chris Wallace. Okay. That doesn’t exactly bode well for Donald Trump. See, Trump has spent the last couple years insulting Chris Wallace on social media and occasionally in speeches and other, uh, uh, public speaking of that, he likes to say, hello, Chris Wallace is not talented. How he’ll never be like his father. He is a nasty and obnoxious. Some of the insults he has thrown at him. And even though he did sit down for an interview with him just about two months ago in the interview, Chris Wallace did call Donald Trump out on his lies when he felt the need to do it, didn’t do it every time.

But he did it more than most other journalists do, except for, of course, for Vince Swan, from Axios, that was beautiful. But Chris Wallace is, you know, pretty close second at that point because none of the other Fox host are willing to do it at all. But Wallace does. And of course, Wallace did it with Biden as well by, you know, danced around some of the questions Wallace asked, he pressed him further by never actually answered. So I actually believe it or not. I like the idea of having Chris Wallace moderate this first debate. I think this first one out of the gate should be hard hitting. I think it should come out and just nail both of these candidates. Not because I want, I wanted to be a total freak show, but because the public needs to understand Biden’s been pressed on issues. He really, really was during the democratic debates.

That’s why most people thought he wasn’t going to do it. He was able to, to a degree, explain himself, not necessarily justify it to us. You know, we, we didn’t like his explanations, but he was able to explain, he can handle heat Trump. Oh, Trump can’t, Trump cannot handle heat and that’s the difference, but that’s what the public needs to see after all, we have seen Joe Biden, even this week give some really horrible and truly bizarre speeches because he just starts rambling about things that weren’t what he was actually talking about in a debate setting. He doesn’t necessarily do that. So if we want to convince the public that Biden’s not as crazy as Trump thinks he is, or Trump wants us to think he is, this is the setting to do it. Nancy Pelosi is absolutely wrong suggesting that Biden should sit these out. He should not

Because as it stands right now with Wallace moderating that debate, Trump’s probably going to get it a little bit harder, but wireless is not going to go easy on Biden either. And that’s what the public needs to see. That’s what the debates are supposed to be. That is the actual job of the moderator. Not to just sit there and ask a question while the candidates lie to their faces, but to call them out on it. We know that MSNBC host did it to Bernie Sanders during the democratic primary debates. Didn’t really do it so much to the other candidates, or certainly not to the same degree, even though it was warranted, but they made sure to call Bernie out when they thought he was lying, even though he wasn’t. So yeah, that’s what a moderator is supposed to do when done fairly. And hopefully Chris Wallace can do it fairly. I am looking forward to this. I think there needs to be fact checking. I agree with Joe Biden, that we should have a, um, a ticker going across the bottom, doing fact checking as well. The public needs to know what is real and what is not. But if they’re expected to just trust what comes out of Donald Trump’s mouth, and if that’s not challenged, then what they’re going to believe. Isn’t going to be anywhere close to the truth.