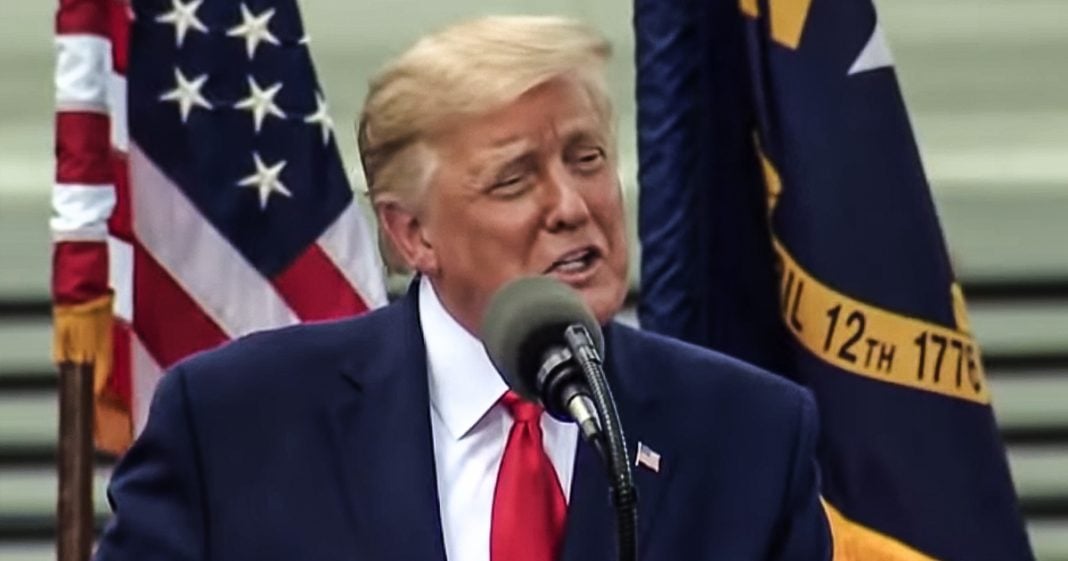 Donald Trump was asked about North Carolina’s vote by mail system on Wednesday, and his response shows how clueless and corrupt he truly is. He actually encouraged his supporters to VOTE TWICE by mail, just to test the system and see if it would catch the voter fraud. The man is telling his supporters that they have to commit voter fraud in order to prevent voter fraud. Ring of Fire’s Farron Cousins discusses this.

Yesterday, Donald Trump said something interesting. Uh, when he actually encouraged his supporters in North Carolina to commit voter fraud, the man actively told his supporters to go out and commit felonies, to see if it was possible to commit the felony itself. Here’s the exact quote from the president of the United States. Uh, let them send it in and let them go vote. And if their system’s as good as they say it is that obviously they won’t be able to vote. If it isn’t tabulated, there’ll be able to vote. So he wants them to submit two ballots by mail. That’s what this is about. It’s all about vote by mail, uh, submit to, you know, the first one gets counted. And then the second one, if they catch it, then good. That, that means the system’s working. You got nothing to worry about. Uh, but if they don’t then, Hey, well you got to vote twice.

So good for you. Here’s the thing he didn’t mention though, to his supporters who they don’t know any better. Let’s be honest about that. We actually saw, it happened three times in 2016, where he had told his supporters of y’all. Remember he told him to vote more than once three of his supporters did vote more than once for him, because they were worried. Democrats were going to try to steal the election. Cause he said they were so they voted twice. They got to go to jail. And that’s what happens if you vote twice. So if, if the system is as good as they say it is, and they do catch you, like Trump says, you’re going to jail. Like you’re not just going to be like, Oh, okay, good. Yay. The system works. We’re so glad. I’m glad I was just testing. You know, you go to jail.

That’s what happens. You don’t get to say what the brews knew. Me knew you’re going to go to jail, but he doesn’t care because he has nothing to lose. In that situation. You knew you’re the one that’s going to go to jail. But if they don’t catch you, then he’s the one who gets two extra votes. Sounds like a win win, right? At least for him, not for, not for you, not for the voters. Uh, here’s the thing. Folks don’t ever under. Any circumstances send in two ballots don’t ever take the president of the United States advice. The current president of the United States, uh, don’t ever take his advice when it comes to voting at all. Don’t listen to them about where to vote, how to vote, uh, how to send in a vote. This man is lying through his teeth. And he’s also grossly misinformed about how the entire thing works. He is spreading very dangerous misinformation right now. That is why the social media outlets have had to come out and start censoring and tagging his stuff as being blatantly filled with absolute lies because that’s what we’re with right now. But for the love of God, if the president of the United States tries to get you to commit a felony, please don’t do it because going into court and saying that the president told me to is not going to be enough to keep you out of prison.