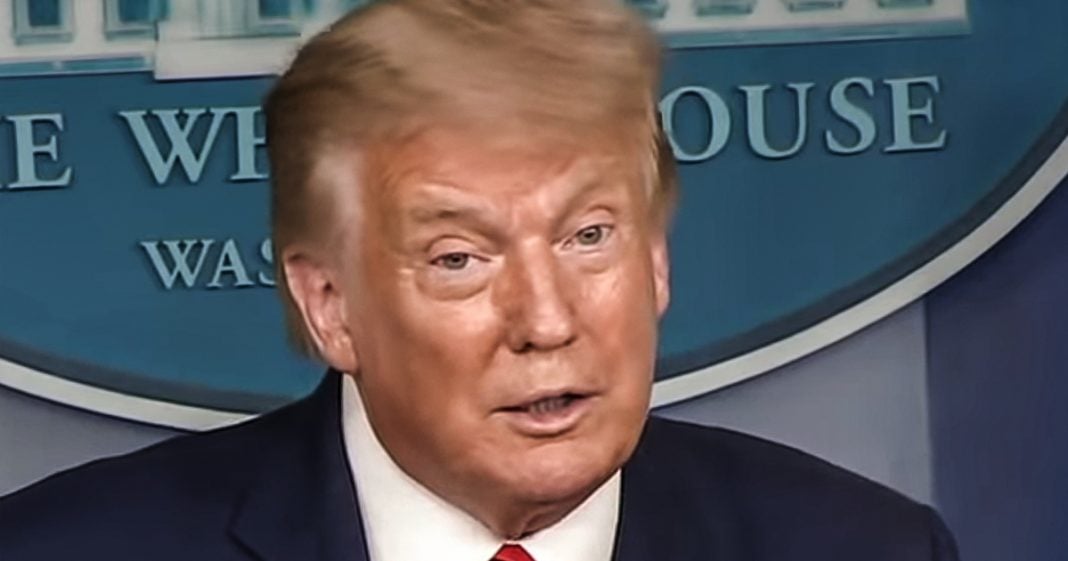 Donald Trump is drunk with power, and he wants the entire country to know just what he is capable of doing. It was announced on Wednesday that he has issued an order to review the federal funding to liberal-run cities to find out where those funds can be redirected to. This is similar to his attempts to “de-fund” sanctuary cities, and hopefully it will have the same ending where Trump loses in front of every court he goes in front of. Ring of Fire’s Farron Cousins discusses this.

Yesterday, Donald Trump signed an order that demands that the white house office of management and budget go through and find out how they can effectively de fund four different cities, all run by Democrats. But these are cities that Donald Trump has proclaimed are anarchist cities. They include New York city, Portland, Oregon, Seattle, Washington, and Washington DC. These are cities that have seen protests. They have seen violence. They’ve seen some property damage, but Donald Trump thinks that what is happening in these cities warrants withholding billions of dollars per year in federal funds. Federal funds that by the way, go towards things like hello for people who can’t afford housing, they go towards infrastructure, you know, to help prevent bridges from collapsing and roads from caving in these are vital funds that these areas have to have. And by the way, we’re not talking about some rural little city with a population of 500 and you know, two little local businesses.

We’re talking about major metropolitan areas that generate billions of dollars in tax revenue for the federal government. Every year they’ve paid their fair share. And Donald Trump thinks he can come along and withhold it from them because he doesn’t like the way they’re handling, handling the protests. He doesn’t think they’re doing enough. And to be honest, we’ve seen some pretty crappy responses from some of these, uh, mayors of these cities. However, nothing that has happened, warrants withholding this federal money from them. Uh, but to those who are actually concerned about this, who think that, uh, the cities are going to lose money, worry, not, okay. Look back at every single lawsuit, every single court battle that Donald Trump’s administration had to fight, uh, when they attempted to defund those sanctuary cities. Yeah. How many of those that they won this way? You can count them on zero fingers.

That’s how many times the president won those legal battles. It has been determined that he cannot withhold funding from a city here in the United States for his own political reasons. And that is exactly what this is because Donald Trump is trying to convince the public that he is doing something to keep them safe. He is absolutely out there working for you, trying to protect you by taking money away from these areas. And I’m pretty sure that people out there protesting really don’t care. I’m pretty sure most people in this country don’t even understand what that actually means. I don’t even know that Trump knows what it means, but one thing we do know the courts have smacked him down on this issue in the past. And they’re sure gonna do it again. Even though this time, he does have William Barr at the home of the DOJ and he has tasked William Barr with coming up for the parameters on what’s going to define what he calls, quote, the anarchist cities. Even that’s not going to be enough because just like with the sanctuary city lawsuits, the courts, uh, pointed out that there is no such real thing, like a defined thing as a sanctuary city.

So you can’t defund them because what you’re claiming they are doesn’t actually exist. Same thing’s going to happen with this one because the bottom line is you cannot defund a city here in the United States, just because you disagree with them politically, because if Trump gets away with this, then I would think that people in Alabama, Florida, Georgia, Mississippi, y’all going to be shaking in your boots for what might happen under the next democratic president. If he decides to be as petty as Donald Trump is, see the cities. Trump is wanting to defund pay a lot of money in taxes. They hold a lot of power. They’re going to prevail on this. And Donald Trump is going to lose. And again, red cities better hope that Trump loses because eventually we will have a democratic president, probably one who’s pretty petty based on what we’ve seen in recent years. So careful because what goes around, comes back around.