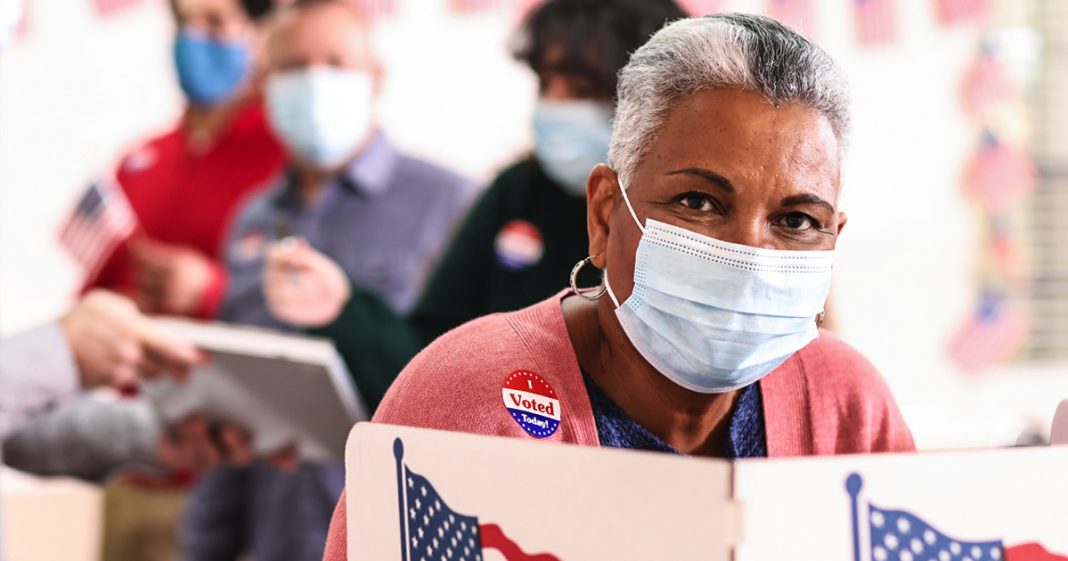 According to a new report from the Palast Investigative Fund, the state of Georgia in 2019 wrongfully removed 200,000 voters from the voting rolls because the state said that these people moved and didn’t update their registration. Greg Palast’s group found that this is completely fabricated and that the state was only trying to thin the rolls to help Republicans. Ring of Fire’s Farron Cousins explains what’s happening.

According to a new report by the Palast, investigative Fonda, our good friend to bring a fire here. Greg Palast, uh, the state of Georgia last year alone purged roughly 200,000 people from their voting rules. Even though more than 60% of them did not meet the criteria that the Georgia secretary of state had accused them of meeting. Here’s what happened according to the report, uh, Georgia secretary of state looked at the voting roles, went through doing what they call quote, routine maintenance and, uh, found about 200,000 people that the secretary of state then said, Hey, all of these people moved. All of them did not file a change of address form. Therefore, all of them, you inadmissible, you’re off the voting roll. You gotta fix it. And then we’ll put you back on. Well, the Palast investigative fund looked into this. They hired people to go through and look at this.

And they found out that 63% of them never, never moved at all. They’re still in the same place. The Georgia secretary of state was 100% lying. So you had more than a hundred thousand people that were kicked off. The voting rolls that should not have been in a state that much like other swing States like Florida, a hundred thousand people could absolutely determine the outcome or change the outcome in a state like Georgia today. And the secretary of state understands that that’s why they have spent the last several years purging, purging, purging, without giving any regard to whether or not what they’re doing is legal. Whether or not what they’re doing is proper and whether or not these people are actually legitimate voters. They have also been going through according to the report and purging people that they claim are inactive voters. Even though last time I checked not voting.

Even if you’re registered to vote is not disqualifying. I know Republicans are trying to make it a disqualifying thing. Like if you didn’t vote in the last two elections, you, you lose your registration. Uh, you, you actually can’t do that, but that is the kind of suppression efforts we are dealing with this year. It’s not just Donald Trump’s attacks on voting by mail it’s States like Georgia that are just arbitrarily going through the voting roles, looking at Democrats. Cause that’s what most of them are. And just saying, Nope, take them off. And here’s what happens if you do not get that notice, which a lot of these people do not get the notice that they’ve been kicked off the voting roll, you show up to vote. Your name is not on the role. You don’t get to cast a real ballot. Typically they will give you a provisional ballot.

Those may or may not always get counted. It just because if they’re looking through and say, you’re, you know, Farron Smith and uh, you didn’t move, you shouldn’t have been removed. So they let Farron Smith fill out this provisional ballot. And then they go to check and see if it works. But there was another fair and Smith who did move well. This parent Smith doesn’t match that fair and Smith. We’re not going to take the time to see if it’s the same fare Smith. So we’re just going to throw it away. There we go. That’s actually what happens in a lot of these instances, it’s just people with the same name because Hey, that’s common. It happens. Not for all of us. I’ve never met another Farron cousins. However, there’s plenty of people with, with the same name. That’s what we see when States try to purge people because they say, Oh, you’re a convicted felon.

You can’t vote because your name is, you know, John Smith. Yeah. You get a hundred thousand John Smith’s in your state. How do you know? Which is which well we don’t. So we just purge them all. That’s the kind of crap we’re dealing with. Folks. These are things that legitimately happened and have been happening for over 20 years that we know of. And it’s going to be so much worse this year, Republican controlled States understand how much Donald Trump has hated. They know that the public does not like him. They do not want him to be president. He is facing quite possibly the toughest road to reelection that we have seen of an incumbent in many, many years. And that’s why they got to go to the dirty tricks. That’s why they got to resort to cheating because that is exactly what this is. But that is also one of the reasons why we have such great people out there like Greg palace to Brad, Friedman, Ari Berman out there exposing this stuff and warning us as they have been for decades that we get to do something about this before it’s too late.